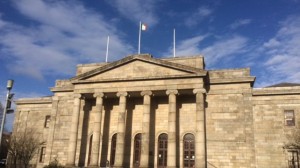 Man (24) was struck with wheel jack.
A Tramore man was knocked unconscious when struck three times on the head with a metal bar in an “exceptionally mean, cowardly and sneaky” late night attack in the seaside resort, the Circuit Criminal Court heard in Waterford last week.
The unprovoked attack on chip shop worker Shane Fleming (24), by a man he did not know left him with appalling permanent and prominent disfiguring scaring on his forehead that he would have to live with for the rest of his life.
Peter Whelan (23) of Number 33, Oak Terrace, Lisduggan, Waterford, pleaded guilty to assault causing harm at Strand Street, Tramore on May 30th, 2015.
Judge Eugene O’Kelly said the violence was completely gratuitous and the weapon was used repeatedly. The only excuse given by the accused man was that he was binge drinking.
If the scars suffered by Mr. Fleming were sustained in a car accident the civil action for damages would be between €60,000 to €100,000.
There was absolutely no motive whatsoever and it was heart rending to read the Victim Impact Report, said the Judge.
Garda Joanne Colfer (Tramore), said Mr Fleming came out of a pub to smoke a cigarette and was approached “out of the blue” by the accused who hit him with the metal bar of a wheel jack.
She found him lying on the ground with blood flowing from his head at 2.40am. A crowd of people were standing around him and he was removed to hospital.
The injured man stated that he suffered a fractured shoulder and a laceration to his head that required four stitches.
He was left lying immobile and in pain on the pavement for an hour with blood pouring into his eyes. He felt terrified and shocked and feared for his safety. The emotional and traumatic experience would never leave him and for several weeks he was house bound while his face and eyes were swollen.
Garda Colfer said the accused man did not explain why he carried out the attack but on seeing the CCTV he lowered his head between his knees and cried. The metal bar was taken from his friend’s car boot.
Barrister Elaine Morgan, defending, since childhood her client suffered from depression and tended to engage in binge drinking.
He suffered from a misperception of people’s attitudes. On the night in question he was highly intoxicated and gave way to violent tendencies. He was in a relationship and his partner was expecting a child. Since the incident he was alcohol free since and ashamed of his conduct.
He was one of four children from Lisduggan in Waterford, which was an area with certain difficulties from a social perspective. His family was hard working and he was employed by a window fitting company and was earning €75 a day.
Judge O’Kelly noted that no compensation had been offered to the injured party and said he would adjourn the case to next sessions. He strongly advised the accused to focus himself on trying to compensate the injured man.