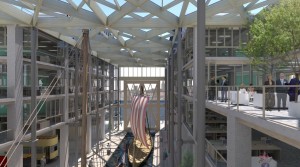 Grannagh native and architect Darragh Murphy's concept drawings for an office campus and associated museum and tourist attraction for Frank Cassin Wharf on Waterford's North Quay. | With thanks to Darragh Murphy - www.dmurphyarchitect.com

Fiskars, the Finnish owners of Waterford Crystal, are not in a position to comment on speculation that their House of Waterford Crystal could, in time, move onto the North Quay as part of the proposed €300 million Alhokair investment.
A Fiskars spokesperson told The Munster Express that the company “won’t be able to comment” on the matter when we raised it with the company recently but added that they “will be in touch should anything change”.
However, this newspaper has learned that the potential Saudi Arabian investors are hopeful of having a major tourist/visitor centre provided for within the 17-acre site which fronts onto the River Suir.
“Alhokair would be keen on that coming about,” said Councillor John Cummins (FG), who added that the House of Waterford Crystal is now operating “at capacity” from its home on The Mall.
And such a view (at least in relation to Waterford Crystal, it should be stressed) was re-iterated in a statement issued on Friday last by City & County Council Chief Executive Michael Walsh.
“There was always an acknowledgement that a successful visitor centre would be constrained on The Mall and this is now the case with the facility up to capacity at peak times,” he stated.
“If it is to be sustainable into the future it has to change and if the ambition is to significantly grow visitors it has to as well. An unchanged proposition would be unlikely to survive 10 years.”
Michael Walsh added: “We have been with the company seeking to see what can be done on the existing site, but in truth the options don’t deliver much relative to their cost.
“The long term ambition has to be and it is considered viable to double numbers. This isn’t possible on the current site.”
It’s believed that the Heads of Agreement reached between the Council and Alhokair in relation to their ambitious project entailed a level of interaction between Alhokair and Fiskars, although the signing of this agreement was not dependant on this particular level of discussions.
We also believe that an expanded visitor centre at an alternative, and possibly custom-built location would provide Fiskars with an opportunity to improve and expand its ‘customer interface’ in Waterford.
According to Cllr Cummins: “There are over 200,000 visitors passing through the House of Waterford Crystal annually, there are six tours passing through the visitor experience per hour at peak times and Fiskars would love to double if not treble that number, which they just can’t do at The Mall given the space they are working within. Waterford Crystal is a brand they are fully committed to and they wish to positively exploit the strength of that brand, which remains considerable.
John Cummins added: “My understanding is that Alhokair is envisaging a range of attractions on the North Quay and that a major visitor/tourist centre would be seen as a necessary element of its infrastructure on the site, driving footfall and generating income…we know that Fiskars want to do more in Waterford, they want to increase their visitor numbers and there would appear to be a major opportunity for them to do so at a location which is set for a massive and welcome transformation in the near future, all things going to plan.”
So is the prospect of Waterford Crystal crossing the Suir, at the very least, a worthy discussion point in Cllr Cummins’s view? “There’s something in it alright,” he contended.
It’s believed that Fiskars would like to create a greater interactive ‘cutting experience’ which could allow visitors to book a day or half day with a master cutter, to gain a greater level of understanding about the art of crystal cutting.
With that in mind, the company had explored the prospect of acquiring two buildings to the rear of the current visitor centre, adjacent to the Hibernian Gift Shop, but later concluded that what they wished to deliver couldn’t be adequately provided for at the space(s) in question.
“It’s an exciting time for Waterford,” said Cllr Cummins. “We have Alhokair seeking to create a major new economic generator in the heart of our city, creating a huge level of employment in the heart of our city, and we have Fiskars, already present in Waterford, intent on expanding and improving their tourism concept within the city centre. And, in time, if the Council can perform any intermediary role between both, then I’m confident we won’t be found wanting.”