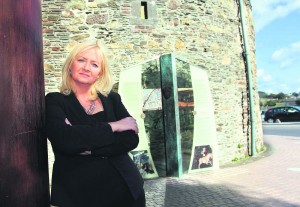 Awarding Galway the title of 2020 European Capital of Culture was akin to “rubbing fat on a pig’s arse”, according to a local Councillor.
At the July plenary meeting of Waterford City & County Council, Cllr Mary Roche (Ind) said she wasn’t sure if she should extend a vote of congratulations or commiserations to the Three Sisters bid team which had competed for the prestigious title on behalf of Waterford, Kilkenny and Wexford.
Galway was announced as winner of the title, receiving a prize of €1.5 million from the EU and will jointly hold the Capital of Culture honour with Rijeka in Croatia.
“It’s very disappointing. You look back and you’d wonder if we ever had chance of winning the title,” said Cllr Roche.
“I’m sure Galway will do a great job and I don’t begrudge it to them on one hand, but on the other hand I do begrudge it to them as it’s a bit like rubbing fat on a pig’s arse.”
She went on to outline a survey she had carried out in 2014 on Arts Council funding received by a number of locations across the country.
“Galway gets over €3m a year in funding from the Arts Council while Waterford City and County gets just €600,000 a year,” she explained.
“Even if we had won the €1.5 million prize we wouldn’t have reached half of what Galway gets every year.”
She continued: “I would think twice before ever bidding again as it’s now perceived as a negative in the city that we didn’t win. But I would ask the Executive to come back with some kind of proposal as to what we can bring forward from the Three Sisters bid. I would hate to see all of this work going to waste and I would like to see some activity coming to the region from the bravery, and the money, put into the bid.”
She congratulated all involved with the Three Sisters bid team for their “Trojan work”.