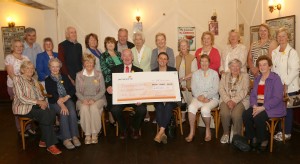 A Cheque for €68,000 was presented to the Irish Cancer Society last week from the Waterford Daffodil Day committee.
The figure of €68,000 (which is slightly down on last year due to the unavailability of some local collection centres on Daffodil Day) was described as “an incredible achievement” considering the controversy which the Irish Cancer Society faced earlier this year.
In January, the charity was forced to reverse its decision to cut its hardship fund for the families of children with cancer after a public outcry.
CEO of the Irish Cancer Society John McCormack also announced he would take a pay cut of €10,000.
At the cheque presentation in the Holy Cross Bar, Butlerstown last week, Eileen Kearney of the Irish Cancer Society thanked all of the local volunteers for their support.
“Thankfully the supporters of the Irish Cancer Society rallied around us and went out and put their best foot forward for Daffodil Day,” she said.
“We had a bad start to the year and it was very difficult for supporters to go out and organise Daffodil Day. Now, we’re faced with an actual crisis in the sector which is going to have an impact on fundraising.”
She condemned the much criticised activities of Console and said 2016 would be “a very difficult year for the charity sector”.
Ms Kearney said she has already seen an impact, with a number of fundraisers for the Irish Cancer Society already put on hold.
“The target for Daffodil Day was €3.4 million. So far we have hit €3.1 million so we are going in the right direction,” she said.
“But we wouldn’t have made it without your help and support. I know you acted as ambassadors for the Irish Cancer Society when you met people on Daffodil Day.”
She assured all of the volunteers that the money raised on Daffodil Day would be used in an “honest and transparent way”.
“We understand that you place your trust in us so that this €68,000, and every single donation we receive from the public is spent wisely and used effectively to make sure that it goes to those who have been affected by cancer and helps improve their lives,” she said.
“We are a company limited by guarantee so we are subject to the rigours of company law. We have to submit our accounts every year and they are audited every year. They are available on our website and have been for a number of years. We are also a registered charity.”
She said the Irish Cancer Society has “strict governance codes” and described the charity regulator was “a welcome addition to the sector”.
She outlined the services which are provided by the Irish Cancer Society, including the Daffodil Centre at University Hospital Waterford (UHW); the Night Nurse service; a transport service for patients; counselling and lobbying.
“92 per cent of our income comes from donations. We need to raise €20 million every year in order to do our work,” she said.
“You are making an incredible difference to the 1,000 people who are diagnosed with cancer each year in Waterford.”
Chair of the Waterford Daffodil Day committee Des Daunt praised the resilience of volunteers.
“If someone had said to me on March 1st that we would reach €68,000, I wouldn’t have put a bet on in light of everything that had happened,” he said.
He thanked all those who collected and counted money and Adam Green who provides daffodils each year.
Daffodil Day is the Irish Cancer Society’s biggest annual fundraiser and will celebrate 30 years in 2017.