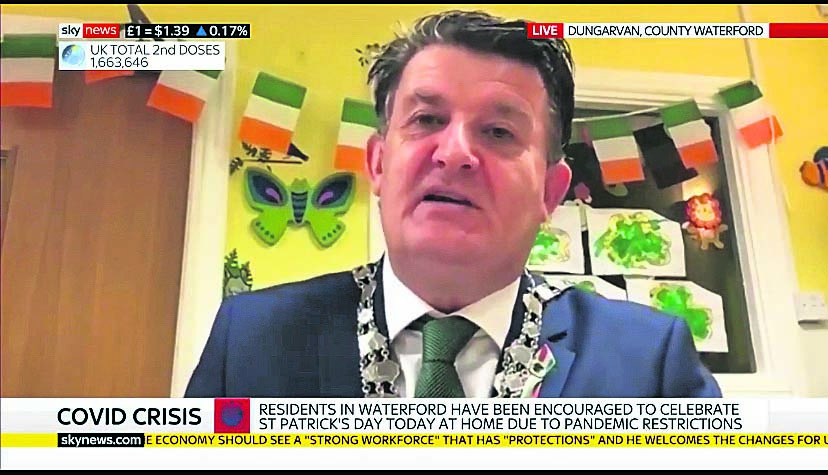 As part of St. Patrick’s Day celebrations, Mayor of Waterford, Fine Gael Councillor Damien Geoghegan made an appearance on Sky News in which he outlined how St. Patrick’s Day was celebrated virtually this year – and the role of Waterford in establishing what are now commonplace traditions with regard to celebrating our patron saint.

Cllr. Geoghegan was asked what St. Patrick’s Day means to him, and it was noted that the day does not centre upon the premise of simply getting together with friends. He spoke of the strong links of Waterford to the Patrick’s Day traditions which have now been adopted for many years.

“St. Patrick’s Day is a really big day for us here in Ireland”, said Cllr. Geoghegan.

“Here in Waterford – we are the oldest city in Ireland. We have a very strong link to the origins of St. Patrick’s Day. It was indeed a Waterford man, Father Luke Wadding, who got the Catholic Church to agree in the Middle Ages to celebrate St. Patrick’s Day as a feast day. The very first St. Patrick’s Day Parade was held in the great city of Waterford in 1903. The very flying of the tricolour took place in March of 1848 by Thomas Francis Meagher when he returned from France. Waterford has been very much at the heart of celebrating St. Patrick’s Day and we have very close ties to the tricolour as well. It means so much to us. It’s about putting on the green tie, wearing the shamrock and the badge and going to our parades but this year it’s obviously very different.”

Mayor Geoghegan noted that parades cannot take place due to COVID restrictions but encouraged people to get involved with the virtual equivalents being offered across the country. He acknowledged that many buildings in Waterford went green for the occasion, with the illuminated Thomas Francis Meagher Bridge, The Theatre Royal and the Granville Hotel among the images featured.

“The public response has been fantastic. It has given people a real lift in what is a really difficult time for us.” 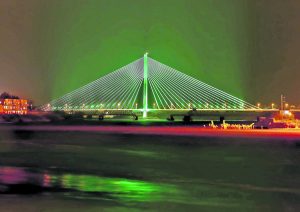 It was acknowledged by the presenter that some people may have been ‘sorely tempted’ to get together with friends on what he jokingly called ‘National Pretend Your Irish’ day and he asked Mayor Geoghegan what his message would be to those people in particular.

“I don’t think we should bend the rules on this occasion. We’ve gone through a really difficult period and had some dark days over the winter. We just need to stick together and hold out for another period of time. There’s brighter times and more fantastic St. Patrick’s Days ahead in future. I would encourage people not to gather in large numbers. People shouldn’t have house parties. Celebrate with your families. Have fun, but bear in mind the restrictions in place. The sooner we get out of this the better and some day again we’ll meet up, we’ll have pints and it will be great.”

Cllr. Geoghegan noted that the Grand Marshal for the Waterford virtual parade was none other than Henry De Bromhead, who created history this week by becoming the first ever horse trainer to capture The Champion Hurdle, Queen Mother Champion Chase and the Gold Cup at the same Cheltenham Festival.

“Our grand marshal for our Waterford virtual parade is none other than Henry De Bromhead who had a fantastic win with Honeysuckle in the Champion Hurdle. Henry has his training operation here in Waterford and we are immensely proud of his achievements and Rachael Blackmore making history also. We can have fun but we can do it in a safe manner. The Irish are a very imaginative and creative race of people so we can do it all at home, get the family pet involved, film your parade and put it on social media and that’s how we celebrate St. Patrick’s Day this year.”

The illuminations of the green buildings across the county were a huge hit with many on social media, with the Munster Express receiving comments from people across the globe in response to photos taken by local photographers Noel Browne and Eddie Dee.

You can see these photos by logging on to the Munster Express Facebook page.