Derek McGrath’s future as Waterford senior hurling manager remains undetermined in the wake of the Deise’s early exit from the Munster Championship.
Speaking to reporters in the wake of his team’s three-point defeat to Cork on Sunday, McGrath said he will “give some time” to contemplate his plans for 2019, adding:
“I don’t have a story for ye today on it but I will give myself some time, to talk to the family. We’ll see.” 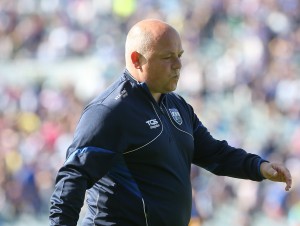 In a broadcast interview, Derek McGrath added: “I have been involved with some of these lads since they were 12…There is huge mental fortitude needed to go through that time after time, (to) give the immersion that fellas put into it. We will consider all avenues.”
See this week’s Sport section in the Munster Express newspaper for more