Deputy City & County Mayor John Cummins has described last Wednesday’s news in relation to the North Quays and Michael Street developments as ‘an enormous day for Waterford City and the entire South East region’. Cllr Cummins, who briefed Taoiseach Leo Varadkar in the wake of the news from Treacy’s Hotel, said Mr Varadkar was “delighted it’s got the green light”, adding: “Government funding will not be an issue.” He added: “The adoption of the Strategic Development Zone planning scheme following the withdrawal of the two appeals by Pat Moran and Eddie Lynch marks a hugely significant step in the progression of this project to transform the cities North Quays and create additional retail space at Michael Street. This is the first time in the history of the state that An Bord Pleanála will not make the final decision on an SDZ. This shows that Waterford is well and truly open for business.”
Cllr Cummins said that construction will commence on both the Michael Street and North Quay projects in the first quarter of next year. Over 1000 construction jobs will be created over a two year period with 3600 full-time jobs full time jobs due to be created upon completion.
He added: “This development will be the catalyst for the next two decades of growth and prosperity in Waterford and the South East region. It will enable Waterford to develop a critical mass which will allow us to compete with our peer cities of Cork, Limerick and Galway.” 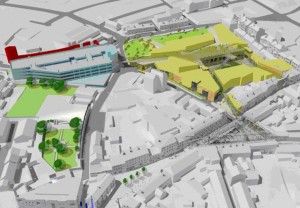 Delivery of the Michael Street development has been a key component of the city centre regeneration project for several years, according to Deputy Mayor John Cummins.

The Deputy Mayor continued: “Expanding our existing city centre and anchoring it on both sides with developments of scale is what differentiates this project from many others in Ireland which have focused on out of town retail centres. The development of the Michael Street retail centre on one side and the North Quays on the other, with a pedestrian bridge and public transportation vehicle will ensure that there is constant movement of people back and forth between both which will benefit our existing retailers enormously.”
On the Michael Street development, Cllr Cummins commented: “Waterford City & County Council are at an advanced stage in acquiring the portfolio formerly owned by KRM from NAMA, there are some legal issues that need to be resolved but there is an agreement in principle for acquisition. As an interim measure we are seeking a licence from NAMA to commence works on the widening of Browne’s Lane which requires encroachment on land currently owned by them. We hope to resolve this as quickly as possible so the City Centre access scheme and urban renewal works can be completed prior to construction works commencing. “While Michael St could theoretically commence prior to the North Quays, for economies of scale it is likely that the Fawaz Alhokair Group will tender for construction services for both sites together, so it’s more likely that the projects will commence simultaneously, with Quarter 1 of 2019 being the target for both. Obviously if we can get movement on one ahead of the other it will be welcome news.” John Cummins concluded: “Rightly or wrongly Waterford is perceived as weak in terms of retail with footfall below what one would expect in a major regional city. I have no doubt in my mind that both developments will have positive effect on how we are viewed nationally and coupled with the many developments such as the Greenway in recent years, we can expect a significant increase in shoppers and tourists to Waterford City.”