Des and Mona Manahan have been chosen as this year’s Saint Patrick’s Day Parade Grand Marshals in Waterford City.
Des and Mona have had their true love story shared all over the world in recent months and have appeared on ‘The Late Late Show’, ‘This Morning’ and BBC News and have appeared in articles all over the world.Because of Mona’s (83) failing eyesight, Des (84) thought that he would start learning how to apply Mona’s makeup so she could always look and feel her best. They have been married for the last 56 years. Des and Mona met in 1952 when Des decided to serenade Mona with Nat King Cole’s “They Tried to Tell Us We 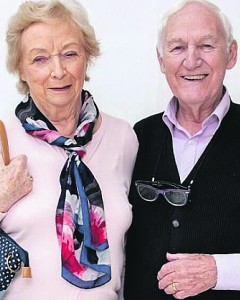 Des and Mona Manahan, who have been selected as Grand Marshals for this year's St Patrick's Day Parade.

Although their story has gone viral, it mustn’t be forgotten that Des and Mona have made huge contributions to the arts and theatre in Waterford. Des has spent his life on the stage, a member of every musical society in Waterford since the 50s, a member of the Grand Opera Society, he has appeared in professional productions all over the country and still performs with Waterford Musical Society today. Mona and Des have both made huge contributions to the iconic “Tops of the Town”.
Mona, who worked on costumes for Red Kettle Theatre Company for years, also took the lead on all the costumes for the Tops shows. Meanwhile Des was writing comedy for the shows and acting as musical director and producer.
Said City & County Mayor Declan Doocey: “I’m delighted to have Des and Mona acting as the Grand Marshalls for this year’s St. Patrick’s Day Parade, these two have an extraordinary story that has been heard by millions of people, as well as having contributed so much to the arts and theatre in Waterford. As we celebrate colour, culture and community in this year’s parade I believe these two perfectly embody what it means to involve oneself in their community and bring vibrancy to everyday life.”
Des and Mona will lead the parade, beginning at Dooley’s Hotel and will arrive at the viewing stand to be greeted by the Mayor.