Home » All Front Page News » Diary of a ‘dryland’ sailor

Diary of a ‘dryland’ sailor 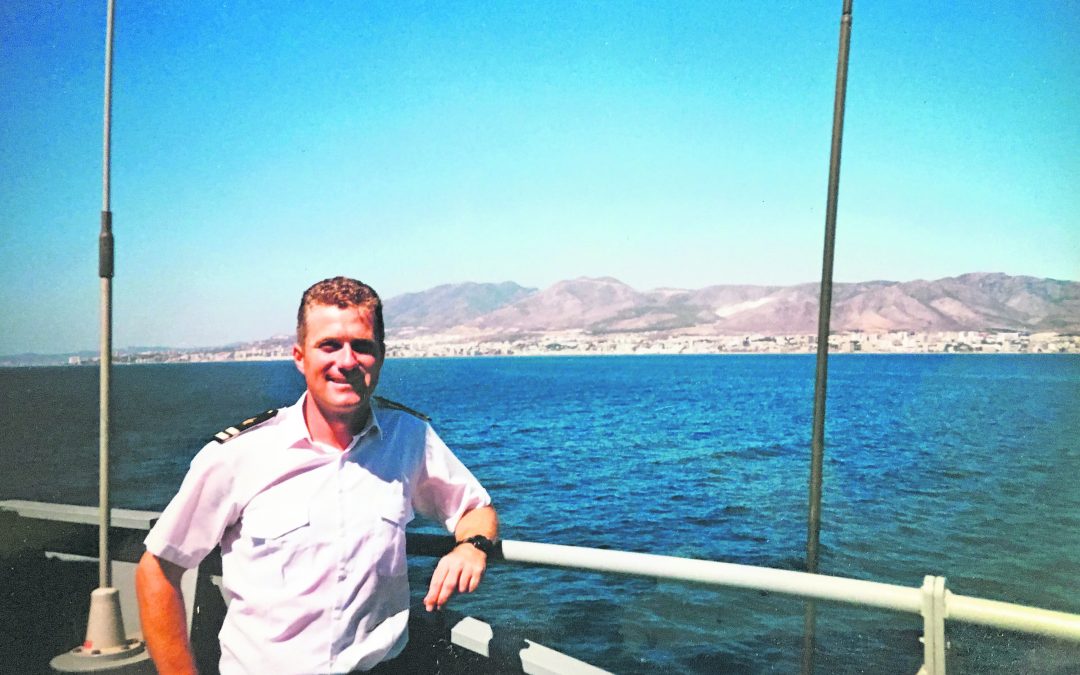 St Patrick’s Day was the first day since he was 17 that he was no longer subject to Military Law. Having joined An Slua Muiri in 1984, Eddie went on to join the Navy in 1987. After a year as a seaman on board LE Eithne, he was the first seaman to be awarded a Cadetship in the history of the Navy and went on to be awarded the prestigious Fastnet Trophy for best Cadet.

Eddie’s training included spending a year at the internationally renowned Royal Britannia Naval College in the UK before returning to the LE Eithne as The Boarding & Communications Officer.

During his time on board LE Eithne, Eddie was responsible for one of the first big drugs finds in Irish coastal waters, off the South coast. He boarded a French fishing vessel where he found cannabis in the haul which the vessel had taken from the seabed and a subsequent recovery operation of the seabed netted 1.3 tonnes of cannabis South of Kinsale. He also went on to be featured in the then current affairs programme ‘The Cook Report’ for unearthing finding ‘hidden fish holds’ on new Spanish built fishing vessels. These holds built into the design of the vessels allowed illegal catches of on average value €100,000 to be hidden from inspection. 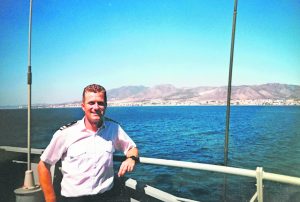 Eddie pictured off the coast of Spain on a United Nations resupply Mission.

Eddie’s next appointment was on board LE Ciara as Navigation & Boarding Officer where he was a part of the successful operation that yielded the detention and seizure of 600kg of cannabis resin off the coast of Galway on board a yacht called the Nicoletta. On this operation, Eddie’s patrol was extended by a week as they monitored the yacht. Eddie was due to be groomsman at his friend’s wedding the following Saturday. On the morning of the wedding as they detained the yacht, the Naval Base contacted his friend to inform that Eddie wouldn’t been in attendance for ‘operational’ reasons and to watch the news. As news broke, Eddie laughs to this day that everyone at the wedding thought initially that he was the one arrested for smuggling drugs.

Eddie then again went to the UK to train with the Royal Navy as a Clearance Diving Officer for a year and upon his return was responsible for the safe disposal of many sea mines, torpedoes and depth charges around the coast of Ireland. A sea rotation ashore as the Navy’s Diving Officer, having returned from the specialist training in the UK, Eddie was a part of the establishment of the Joint Task Force and the role the Navy would play. He was a part of the team that implemented new Armed Boarding Techniques and appropriate operational safety boarding equipment for the Naval Service. Eddie during this time also was responsible for all dive training, in addition to running Army Ranger Wing Diving Courses. During this time, Eddie was also involved in several high-profile Drug Interdiction Operations including seizure of cocaine on board the MV Front Guider at Moneypoint, 600Kg seizure of cocaine off the Sea Mist in Cobh County Cork and searches for smuggled drugs supporting the Joint Task Force.

Eddie was involved in many security operations, search and rescue operations and the sad recovery of many bodies. One of his most heartfelt operations was returning to Helvick to search for and recover two young teenagers. Eddie also remembers how tough it was locally at the time returning to Waterford to coordinate the search for those missing from the sinking of the local boat ‘Jenalisa’. He also supervised the recovery and participated in the Marine Investigation to the accident, but it still hurts him that they never found the missing for the families. During these often-emotional searches he has built up many friendships around the coast. 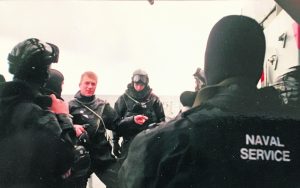 “People are amazing during times of tragedy and loss.” he says. “During the search for the Carracktine off the North West coast, I worked with fishermen from Killybegs who gave up their vessels for weeks to assist in the search and never wavered at the cost”.

Eddie also recalls returning to Dunmore East to deal with a German sea mine which was landed on the Pier by a fishing vessel. They had to evacuate the village to a perimeter of a half mile as the detonator was quite clearly still intact in the explosive main section. According to Eddie, “the steel in German mines didn’t corrode as quickly as their British counterparts.”

LE Aisling was the ship on which Eddie finished off his career in the Navy. He served for two years as Navigation Officer and two years as second in command. During this time, he was involved in many maritime operations such as the demolition of a fishing vessel causing a navigation hazard at the entrance to Fenit harbour, search and rescue operations such as a multiple casualty rescue at the entrance to Castletownbere, assisting vessels at sea with fires on board and continuing a high rate of warnings and detentions for illegal fishing in Irish and EU waters. 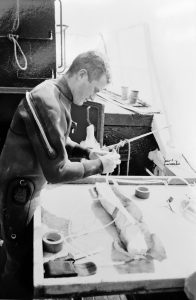 Preparing to safely dispose of a WW2 Depth Charge off the coast of Kinsale.

In addition, Eddie was also responsible for the safety and security for visit of the John F Kennedy Aircraft carrier to Dublin and water safety coordination for four Tall Ships’ events. During his time as second in command LE Aisling, they completed a UNIFIL resupply mission for the Defence Forces and will always remember being instructed to ‘hove to’ on the twelve-mile limit as the Israelis bombed Beirut on the horizon. Next day they were given permission to enter Beirut and he will always remember “the devastation and how people had their generators out amid the carnage just getting on with life.”

Upon leaving the Navy, Eddie was required by contract, due to his qualifications, to do five years on first line reserve. During this time, he did rotations at sea and assisted in diving operations. Transferring to the Naval Reserve, he then finished off his career in uniform as Officer Commanding Waterford Unit Naval Service Reserve and senior officer Ireland. During this time, he was involved in numerous Ceremonial taskings, keeping the Unit ready operationally for supporting the Naval Service. Embracing the connection between Thomas Francis Meagher and the 69th Regiment New York, Eddie led the NSR to New York twice to participate in the St Patrick’s Day Parade, all at their own expense. 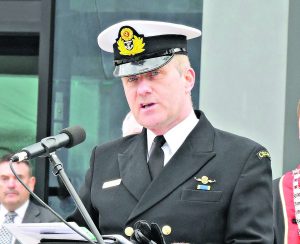 Locally, he has been involved in coordinating many searches, including the waterborne search for a murder victim Meg Walsh, RIP, which he gave expert maritime evidence at the Central Criminal Court. Eddie’s last year in service saw him called to Cork to support Defence Force operations in the fight against Covid 19. Based on board LE Eithne in Cork City, he worked as the ship’s Liaison Officer to the South/South West Hospital Group Situation Room.

During his time in the Navy, Eddie got to travel to many Baltic, Central European and Mediterranean ports, meeting many high-profile personalities along the way. He fondly recalls sharing a drink with Gerry Ryan RIP on board before the Eurovision and the world was introduced to ‘Riverdance’.

Eddie would highly recommend the Navy as a career for any young man or woman and has fond memories and great lifelong friendships. Eddie now looks forward to having more time for his other beloved passion, the GAA.