Drink driving remarks were "an insult"

Eoghan Dalton Reports
A woman whose son died in a crash involving a drunk driver has said she was left “rattled” after she heard Waterford Councillors complain about Gardaí stopping drivers to carry out breathalyser tests. Road safety campaigner Christina Donnelly was responding to comments made at this month’s plenary sitting of Waterford City & County Council, where a motion concerning a call on the Government to provide breathalyser kits to pharmacies was debated. The chamber heard from Cllr Cha O’Neill (Ind) during the discussion, with the City South representative telling of a recent experience when Gardaí breathalysed him twice at morning time on his way to Portlaoise for a Waterford hurling league match. 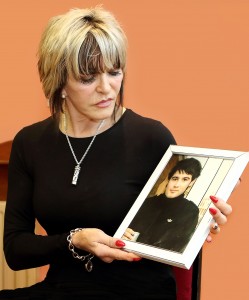 Christina Donnelly, holding a picture of her son Brendan, who was killed in 2009 following a road traffic accident involving a drunk drive| Photo: Noel Browne

He further claimed that there’s doubt over the number of fatal collisions that involved someone who had been driving the morning after drinking, adding that he sympathised with people who had relatives killed by drunk drivers.
However, Ms Donnelly said the remarks were an “insult to both bereaved families who have lost family members to people who have drink driving and to the bereaved themselves”. Her son Brendan (24) and his friend Lee Salkeld (26) were killed when the car they were travelling in was struck by a drunk driver in October 2009. She has successfully campaigned for changes to legislation since then, with her ‘Brendan’s Law’ allowing for a ban on people driving where they had been charged with a serious road traffic offence.
Donnelly, who lives in Faithlegg, has also advocated for recent changes to drink driving laws, including an automatic three-month driving ban for first-time offenders if they are caught with blood alcohol levels of between 50mg per 100ml and 80mg per 100ml.
She told The Munster Express that she found Cllr O’Neill’s comments “extremely arrogant”.
“I was actually appalled by such a lack of understanding, by people who have a seat as a local councillor, who actually should be applauding any measures that will save lives on our loads,” she said. Cllr O’Neill passed each test he took on the morning he set out to Portlaoise but he feels the breathalysing tests will hurt the economy. “I was stopped outside Sallypark and I was saying to myself, that’s going to destroy the tourism in the town if fellas coming from Dublin are going to be stopped on the way back.”
“I was delighted to be stopped outside Kilkenny because then it was destroying Kilkenny as well,” Cllr O’Neill said to laughter in the chamber.
Figures provided by the Road Safety Authority show that around one in ten fatal collisions happen between 7am and 11am.
Ms Donnelly had heard clips of the Councillor broadcast on WLR: “To hear a Councillor say that the safety of road users should be compromised to entice tourists… I thought I was actually hearing things because to even bring that into the conversation of such a serious issue, and while making flippant comments about Kilkenny.”“It’s a long time, a very long time, since an interview like that had that impact on me. I was absolutely rattled by this man’s comments,” she said. He received support in the chamber from a number of councillors, with Cllr Matt Shanahan (Ind) saying that Gardaí breathalysing people on the way to GAA matches was “not what policing is about”. “Garda presence is vital on our roads and when we didn’t have it people were giving out,” said Ms Donnelly, “but it’s only because certain people have been stopped that this has been made such an issue. But do they want to see less Garda presence?”
Concluding, she said that Councillors should consider meeting with people who have lost loved ones to drunk drivers.
“They should have done their homework and thought about the effects of their comments on people but they didn’t sit down and think. If it affected me, then how many other people might it have affected, and who might not have had the resources to respond to it,” she said. The motion in the chamber was eventually backed by Fine Gael, Fianna Fáil and independent members at a meeting of Waterford Council, while Sinn Féin abstained and Cllr Joe Conway (Ind) voted against.