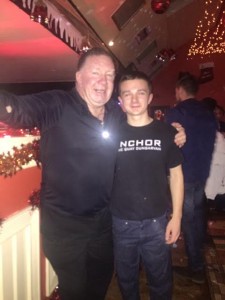 A DUNGARVAN teenager has attracted national praise for rescuing a drowning woman from the town’s harbour.
Dylan Murphy (16), a Fifth Year student at Coláiste Chathail Naofa, dived into the freezing cold waters of Dungarvan Harbour shortly before Christmas and used lifesaving skills which he had been taught by his grandfather.
Dylan’s heroics were highlighted on RTÉ Radio One’s ‘Liveline’ last week.
On December 20th at about 2am, Dylan had finished his shift at The Anchor Bar when a friend alerted him to a woman who had fallen into the river.
Brave Dylan immediately took action and jumped in and swam towards her.
“The current had caught her and pulled her out. By the time I got to her she was starting to go under,” he explained.
“She had a big leather bag wrapped around her shoulder and was wearing a leather jacket. I dragged her up and got her to hold onto the ringbuoy. I put the rope around her hand just in case she let go.”
After ensuring she had been secured, Dylan pulled her towards safety and another of Dylan’s friends assisted from the quayside.
The rescue occurred near Devonshire Bridge and just five metres away from the strongest part of the current in the middle of the harbour.
The woman was rushed to University Hospital Waterford (UHW) and was treated for hypothermia.
Dylan attributed his quick thinking actions to lifesaving skills which his grandfather had taught him.
The rescued woman visited Dylan three days later and thanked him for his brave actions.
“She thanked me and gave me a card but said she couldn’t remember anything about what had happened,” he explained.
All at Coláiste Chathail Naofa have said they are very proud of Dylan’s actions.