Eoghan Dalton Reports
A Waterford man who came to national attention last week has described his dying father’s “harrowing” experience at University Hospital Waterford, saying that the hospital is badly under resourced with unsafe conditions for patients and staff alike.
Michael Gallagher (75) was admitted to UHW with severe abdominal pains and a shortness of breath last month and was forced to spend three days on a trolley in the Emergency Department. Within little over a week, he had died after receiving a terminal cancer diagnosis.
His son Liam later has written an open letter to Minister for Health Simon Harris, detailing a number of crucial issues his father encountered when he entered UHW.

Among them was the lack of access to ultrasound scanning. “There would be no diagnostics performed until the weekend was over,” Liam Gallagher stated.
“My father essentially went into the hospital looking like he was nine months pregnant, because there were 17 litres of fluid built up inside him. One of my problems is that you’d expect a basic provision, as ultrasound isn’t a complex procedure. Without the diagnosis we weren’t able to plan for care that would be palliative in nature.”
“[But] my main problem was the lack of sleep, he spent three days on a trolley next to a corridor, by an access point. Staff had to actually reach around him so they could press the button at the access point, at times he’d have to press the button for them. It wasn’t possible for him to get any sleep in those circumstances and that had its own effect on him,” Liam told The Munster Express.
The Gallagher family is originally from Lismore Park in Waterford city. While Liam and his sister are no longer residing in Waterford, their parents moved to Ballinakill several years ago. They say their father was in serious pain for the duration of his time in the corridor.
“At a certain point an enema was performed to help relieve him. I know that the hospital released a statement afterwards, saying that a radiographer does perform ultrascans in emergencies. In my father’s circumstances it was an emergency,” Liam continued. “It has to be pointed out though that the quality of care was excellent once he got into a bed. The wait is the problem.”
Liam’s pointed criticisms of the conditions at UHW were covered by media outlets across the country, generating a large response. They came in a week that saw a record number of patients waiting on trolleys across the country’s hospitals. “I tend to do just more of an evidence based approach and detail it in fairly frank terms. The response was very touching. I mean, we didn’t expect this sort of response – it seems to have captured people’s attention,” he said. 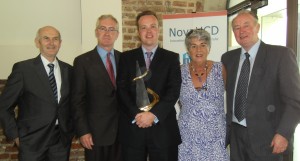 He was coming at the subject from a place of experience, given he is a professor of cancer biology at University College Dublin. Similarly his sister Caitriona O’Neill, who co-wrote the open letter published on TheJournal.ie, is a specialist lymphoedema lead nurse in London. Before leaving for Britain she trained in UHW, then Waterford Regional Hospital.
Liam said his family felt lucky that Caitriona as a nurse, was able to provide palliative care to their father in his remaining days. “My father was a classic older Irish male, whose leg would have to be falling off to get him to go get it checked, but my mother pressured him into going…My sister then had a second sense there was something wrong there, it was a big shock to me though. He was lucky though that he had my sister and me, whatever use I was. I was a bit powerless since it was so advanced. But what really strikes you is that a lot of people don’t have someone who is trained in the area, there’s no one there to fight your corner.”
Liam Gallagher feels it’s vital that the poor resources and services at UHW are highlighted, seeing as it serves much of the southeast: “There has to be appropriate diagnostic services on 24/7. You look at the environment and have to ask, is it fit for purpose? Is there only one toilet serving multiple people? It wasn’t safe for my father. But it’s not just the patients, it’s also the staff – they’re in a very emotionally straining environment.
“When we got the bad news he was given a couple of weeks. Except then he was too frightened to go home because you’d go back to the end of the queue if you had to go back into hospital,” he said.
When asked about UHW’s future, the Gallagher family aren’t optimistic.
“Ultimately, this is a seasonal thing. These things seem to be transferred from one individual to another individual as well. There does seem to be a tide at the moment though, maybe stories like this will help. I don’t know to be honest.
“There has to be some kind of standardised timeline however, so that when you go into a hospital you know how long you will be waiting for different services. Like in the UK, it’s a four hour wait for admittance to an Emergency Department. What is the waiting time here?
While he felt he wasn’t able to provide much assistance to his father after the diagnosis, Liam is determined to find out what type of cancer Michael had.
“My father was diagnosed with a primary cancer of unknown origin. As a scientist I’m probably going to try find out what that is. In some cases it is useful to know and might be able to help further on.”