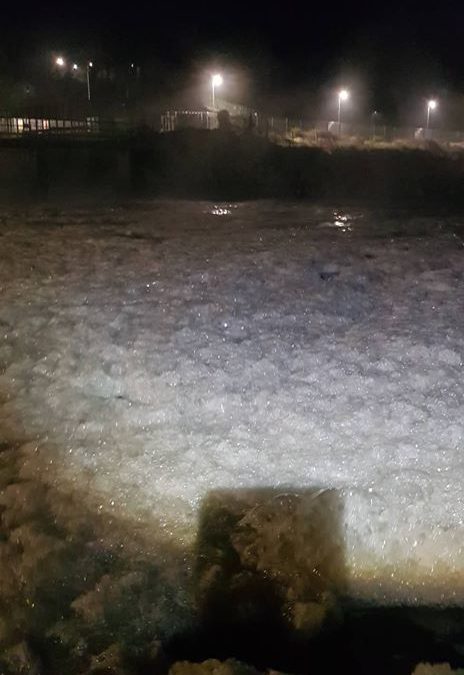 Environmental Protection Agency called on to carry out investigation into estuary incidents
Eoghan Dalton Reports
Locals along the Waterford estuary have called for an investigation into the “destruction” of the river, highlighting what they fear is a serious loss of river life and a use of harmful chemicals in the river.

Fishermen from Cheekpoint recorded the foam lying atop the water across from the Great Island Power Station at Campile, Co Wexford.

It includes the depletion of creatures such as salmon, eels and oysters.
In the case of the latter it has been claimed that two-thirds of the area’s oyster stock have been lost, endangering dozens of jobs as a result. Videos have also been posted on social media showing a foam-like substance lying atop the water at night-time.
In recent days local Green Party Councillor Jody Power has contacted the Environmental Protection Agency (EPA) about the estuary.“Concern is mounting locally regarding the observed destruction of our river ecosystem and biodiversity depletion as reported by the estuary fishermen and river users,” Cllr Power told the EPA in correspondence seen by the Munster Express.
“In particular, the disappearance of the once abundant mussel, the eel, the salmon over recent years and now the threatened soft belly green crab, rag-worm, cod and oyster and cockle aquaculture is causing much alarm.”
He alerted the EPA after being contacted by several fishermen who noticed fewer and fewer creatures along the estuary.
“The fishermen can see what’s happening on the ground. They can see when there’s been a biodiversity loss,” said Cllr Power, who is also a lecturer at the National Maritime College of Ireland.