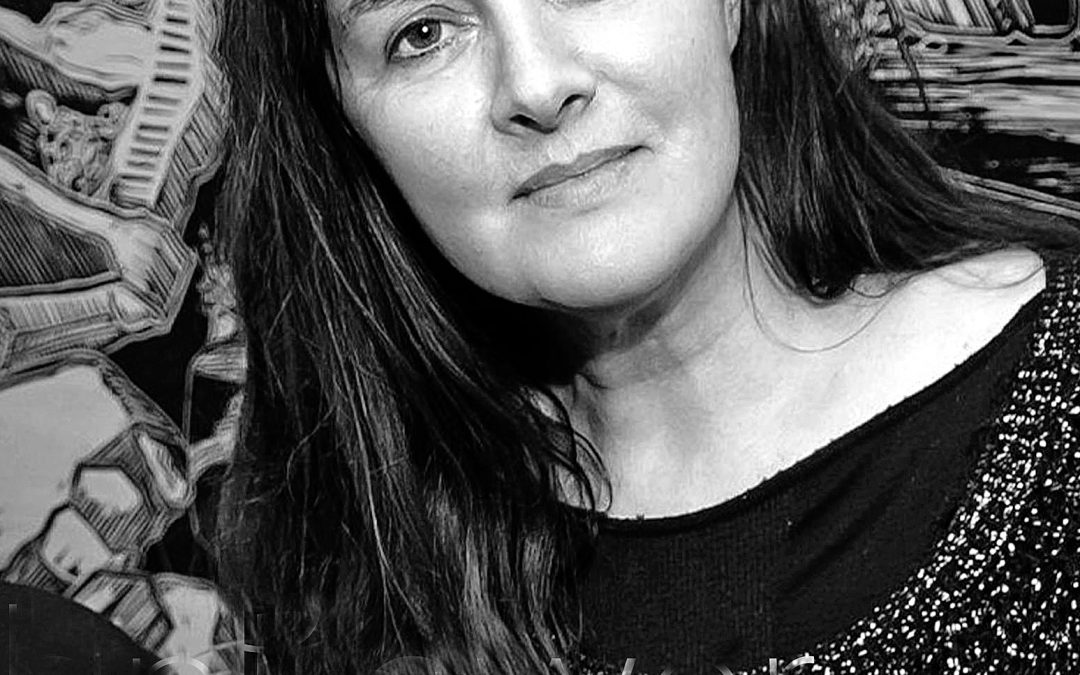 Emer Ward Powell is the Facilitator at the award winning Boxworks, located on Patrick Street in Waterford. The co-working space was recently named runners-up in the ‘Innovation Hub of The Year’ category at the Digital Business Ireland National Digital Awards.

A native of Clonmel, Emer has lived in Waterford for many years and has been involved in various initiatives to promote the Déise. She is passionate about music and the arts, married to well-known local photographer John Power, and has two children, Peter (Composer, Director, Sound Designer) Órla-Peach (Archaeobotanist, Founder of Digital Heritage Age, Research Assistant MaREI, UCC)

What were you like growing up? Did you always think you would end up where you are today?

From the age of five, my Grandmother began to parade me out for family gatherings to perform my party piece, ‘Feed the Birds’ or ‘Nobody’s Child.’ One time, she was particularly pleased with herself when my performance made our American relations cry. Just like that, BOOM! She had planted the seed that I had a talent. By the time I was nine years old I was organising concerts and short plays in a Church ruins at the back of our house. I knew even then I was mapping out my future in this makeshift theatre. By fifteen, I was singing in Folk Clubs up and down the country, by sixteen, I was singing with the Dave Prim Band and at seventeen, I had moved to Waterford after being invited by Ray Moyser (RIP) and Bobby Bible (RIP) to join their band TAXI. Fast forward to the late 90’s and I was a founder member of the band Miss Brown to You and up until 2014 we toured extensively.

I have had the most incredible opportunities throughout my music career to work and record with the cream of Irish and International artists but working in the music industry was always precarious, so it was not my only career choice, I always had a plan B. I have reinvented myself several times, sometimes by choice, sometimes through necessity. I have worked in Hospitality Management, Craft Design, Visual Arts, Interior Design, Arts Coordinator and Co-Founder of an Arts Festival, Student, and now Facilitator of a Coworking space. However, no matter what path I have taken, I am defined by my birth talent which all my skills, passion, and life experiences are firmly rooted to and sprouting from!

My Grandmother for planting that seed and Joni Mitchell for inspiring me to nurture it by singing the Blues. Kieran Byrne, (ex-President of WIT) who championed third level education for the mature student and demanded that Waterford should have the absolute best to deliver that education. He was an amazing man. I believe that had he remained we would already have a University by now.

Do NOT listen to your teachers – your life turns out to be far more interesting than theirs. You will turn into a Swan, eventually!  Stop doubting yourself, you will achieve everything you set your mind to.

I do not take criticism well. I know my own failings and consider myself to be my best and hardest critic.  I am loyal to a fault but that comes with a caveat. If you do something to disrespect that loyalty, I will cut you off without a second thought.

Unpunctuality! If you arrange to meet with me, you can be sure that I will be there at least fifteen minutes before the time. My even bigger pet hate is being delayed by someone else. That can send me right over the edge.

What is your favourite ever piece of art (book, song, film, album) and why?

The Film would have to be ‘Shortcuts.’ It has death, chance, luck, infidelity, and Tom Waits. Perfect! The Song is more difficult. One that sticks out would be ‘Anthem’ by Leonard Cohan. I heard him recite this at his first gig in the Royal Hospital Kilmainham. Nothing but his speaking voice boomed out through the PA, up through the seating, across the top of our heads and just hung there, reverberating in the air. The audience were so silent you could nearly hear them breath in unison. It was one of those defining moments in a performance that left you in no doubt that this 73-year-old artist, poet, song writer, singer, monk, had just reached in and held your soul for a moment. I cried my eyes out. I thought my heart would burst. 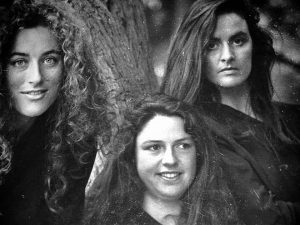 ‘MISS BROWN TO YOU’: Pictured L-R are Carrie Crowley, Jane O’Brien-Moran and Emer.

My ideal weekend would be an early morning paddle in Kilkenny with the Nore Dragon Paddlers. We have not been out on the river since the first lockdown. I miss the sound and smells of the river. I miss the feel of the boat on the water, and I miss that deep sense of comradeship that you have with your team on the water. Then, lunch in Dunmore East with our two adult children, they have only been home once since March 2020, and finally, finish with a walk on the beach in Tramore with ‘Molly’ our German Pointer.

I have a few. First would be my two children Peter, Órla-Peach, and my husband John. I love their respect of all things, their strong belief in equality and inclusion of all, their strong work ethic, a determination to follow their own path despite the challenges they might encounter.

The other would be my part as one of the design team on a cowork development, Boxworks.Co.Work.Space with Jim ‘Flash’ Gordon, and Jeff Darlington in 2015. Since the buildings official launch in 2016 Boxworks has been the recipient of several significant awards. However, the ones that mean the most to me personally are our nomination for the Best of 7 Building Designs in Ireland 2017 and the other, in March 2021 we were awarded runner up with Dogpatch Labs for the Best Innovation Hub in Ireland, at the Digital Awards 2020. It just doesn’t come better than this!

And finally – my journey into the world of academia which began in 2009. Since then, I have completed a B.A. in ‘Hospitality & Tourism Management,’ an M.A. in ‘Arts & Heritage Management’ and more recently, a Post Grad in Trinity College Dublin in ‘Innovation & Enterprise Design’ which I was awarded a 1st. I am immensely proud of that.

Some regrets! My Mom died April 2018. I wanted to do something to celebrate her life.  I have always used my maiden name ‘Powell’ so I decided to take Moms as well. I now sign my name as ‘Emer Ward Powell.’ Because I know she would have liked that I regret not doing it when she was alive.

I was a crew member on the ‘Irene’ in the 2011 Tall Ships Race. Our fifth night in we were heading towards Waterford and around 2am we had a collision with a vessel that was sitting in the middle of the shipping lane, no lights, no radar and one guy on board. We hit it with the hull of the ‘Irene’, and it snapped their mast in two. A distress call was made to the Coast Guard, a search light was given to me and the Captain roared ‘aft’ – I thought I had been dropped into a movie and we were waiting on the cavalry to arrive. Like the speed of light, the cavalry did arrive in a Rescue Boat and the Coast Guard helicopter. I thought my heart would burst with excitement, panic, and absolute resounding fear. Later the Captain invited me to raise the Irish flag when we came into Waterford. I was so totally proud 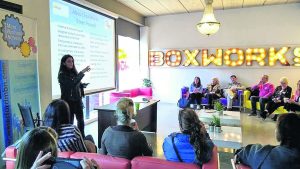 Emer speaking during an event at Boxworks.

If you could be or do anything else, what would you choose?

I love the Sea. From time to time, I thought I would like a career in the Irish Naval Service. However, I was never good with those in authority so I would probably not have been an ideal candidate.

When I finished studying Interior Design, I investigated going on to study Architecture, but Maths was my Achilles heel, so I never pursued it. I believe that this is not as big an issue now. However! That ship that has well sailed, I think.

I love its resilience. What other city in the world would build five museums in less than ten years, and still building.  Our magnificent coastline of course.

I would start with repairing the rainforests – and by the time we fix that we will have figured out that we are only as good as the air we breathe.

If you could choose to travel anywhere in the world, what would be your destination?

My sisters have summer houses in Liscannor and Barley Cove. A couple of weeks in either or both places, the sun shining, my family around me, playing guitars and drinking beers under the stars. All would be restored in the world. However! After three lockdowns (so far) I would be happy to just get to walk on the beach in Tramore or Dunmore East to be honest.

I have just recently taken a studio pod in the new Arts/Crafts Project in Johnstown which is being run by Waterford Civic Trust. I’ve been wanting to reconnect with my creative side for some years now and while I am a bit apprehensive I am also excited. The wonderful thing about new beginnings is the journey and where it will take you.