Kieran Foley Reports
A STORM of controversy has erupted surrounding Winterval’s Horse Drawn Sleigh after what’s been described as a “traumatic” incident involving one of the sleigh’s horses.
The Horse Drawn Sleigh has been a regular feature of the annual festival which was launched in Waterford on Friday last.
This year’s sleigh journey takes visitors to the Christmas markets and carousel in John Roberts Square, the new Apple Market and onto Winterval on Ice on the Waterside.
Jenny McGuire took to Facebook on Sunday to say: “I was in town yesterday enjoying all that Winterval has to offer. It gives a wonderful Christmas vibe around the city. Our day was ruined when those poor horses carrying the horse-drawn sleigh came past the carousel, where we were standing. One looked like it was going to collapse, it looked completely ‘bet’. The horse then came skidding towards us with its four legs sideways.”
Jenny, who had a one-year old child in her arms, feared the horse was going to crush them against the carousel gates.
“Other children and adults around were also traumatised by the experience,” said Jenny.
“My sister was so upset she ran after the horses and tried to plead with the workers to stop it, as the horse was still collapsing and sliding against the other horse beside it. The poor horse was completely unsteady on its legs.”
Jenny claims her sister’s pleas “fell on deaf ears” and the sleigh continued to be “dragged around” for the afternoon.
“There has been so much controversy around animal cruelty and the rights of animals over the past few years,” she said.
“I have seen petitions, signed by thousands to ban horses and sulkies on the roads. It baffles me how anyone thinks this horse-drawn sleigh is acceptable to have at Winterval every year! Why isn’t there more controversy over this?! How is this ok?!” 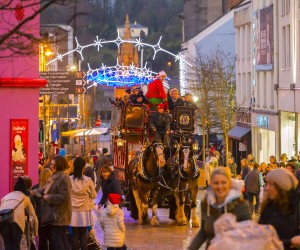 The Horse Drawn Sleigh has been a regular feature of the Winterval Festival in recent years.

Many fellow Facebook users agreed with Jenny’s comments, with some calling for a boycott.
Margaret O’Meara said such a practice is “just not fair on the poor horses”.
However, other commentators highlighted the care and attention which they said the horses receive and some blasted the “uneducated comments” which had been made by various others.
Jean De Paor said the “majestic horses love to work”.
“There is no duress whatsoever on them. If they had a problem they would not be long about telling us!” she said.
“I saw one pawing the ground whilst waiting for the people to load. This is the horse’s way of telling you to get a move on! They look fit and healthy and, I believe, are worked on rotation. There is no sign of ill treatment.”
Stephen Coughlan said the horses have an “amazing life” and pointed out the care which they receive all year round which is “better than most people treat themselves”.
The unsuitability of the ground in John Roberts Square was highlighted by a large amount of people as being the main issue, with many saying the surface in the area presents hazards not just horses but for pedestrians as well.
Many people pointed out that the horses lack grip on the surface, with many others also recounting personal accounts of slipping and sliding on the surface in recent times.
Peter Jones said: “The only person at fault here is the muppet who decided to put down those slippery cobble stones all those years ago! Work horses love to work. Taking their work away from them and putting them in a field or a stable for the rest of their life would be cruel.”
ISPCA Inspector Alice Lacey said she is aware of some concerns in relation to the issue.
Speaking to The Munster Express, she expressed her own concern in relation to the suitability of the surface in John Roberts Square for the horses – especially as they are transporting a significant amount of people each day they travel.
In a lengthy statement issued just before we went to press, Shane Kavanagh of 4 Shires Carriage Company said that each of their horses has its own professionally measured and fitted harness to ensure their comfort and safety…
“Once the horses finish their shift they are moved to a secure holding area with access to water and haylage, before being returned to the farm where they receive hard feed and a fresh bed of straw for the night. Every morning they are fed again and checked for soundness and any signs of injury…
“All the horses have been trained exclusively by ourselves and we have an intimate knowledge of their personalities and capabilities.”
Mr Kavanagh added: “We have invested a lot of effort and research into selecting the correct shoes for our horses. We use a heavier than standard shoe with a number of tungsten pins inserted for grip. This is the same system as used by An Garda Siochána Mounted Unit. Due to the nature of the paving stones at Barronstrand Street and the steel shoes of the horses an occasional slip where a shoe fails to lock in immediately is inevitable. There is absolutely no possibility of a horse losing their footing or falling as a result of this.”
Shane Kavanagh concluded: “We have recently been granted planning permission to build a Working Horse Farm Visitor Centre at our farm in Butlerstown where we will showcase the horses and their capabilities to the general public, thus enabling people to gain a greater understanding of why these majestic animals exist and what makes them so fascinating and enjoyable to work with.”