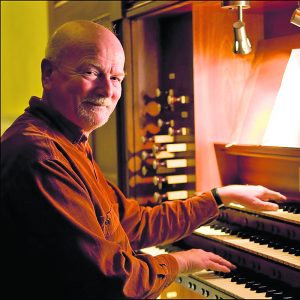 Born in Dublin in 1948, he studied music at Trinity College Dublin and organ at the Conservatorio di Musica Santa Cecilia in Rome.

Sweeney was director of the RTÉ Singers from 1978 to 1981 and also lectured in TCD and the College of Music.

He was subsequently appointed Head of Music at Waterford Institute of Technology (known then as Waterford Regional Technical College).

Over the next three decades, he built the music department into a vibrant hub of creativity and new music that included the establishment of the Waterford New Music Week and visits from composers Louis Andriessen in 2001 and Michael Nyman in 2011.

Sweeney’s own work initially took an experimental and serialist approach but from the late 1980s it became minimalist in style and he was an advocate of composers such as Reich, Reilly, Glass and Tavener in his compositional teaching in Waterford.

His work was also characterised by the influence of traditional Irish music and he used fragments of Irish melodies and airs in his work, seeing a natural synergy between the flowing melodic structures of the music and the techniques of minimalism.

An example is his piano work The Blackberry Blossom (1991), which was commissioned for the GPA Dublin International Piano Competition and which quotes from the Irish reel of the same name.

His String Quartet (1996) and Concerto for Guitar and Strings (2005) also make use of Irish traditional melodies.

Polyrhythms and other rhythmic devices were also a feature of Sweeney’s work, as can be heard in Duo (1991), which was the first work on the very first CD of new music from Ireland issued by the Contemporary Music Centre in 1995.

Aleatoric elements, in which he left decisions on the number of instruments, repetitions and order of entry, could also be heard in keyboard works such as Momentum (1993) and Waveform (2007).

His musical thinking went beyond stylistic concerns, however, and he celebrated the diversity of contemporary music making. Writing in the Journal of Music in 2002, he said:

“As a lecturer in contemporary music I am aware of my own tastes and perhaps prejudices, in spite of efforts to be impartial, when it comes to deciding which composers to discuss. My students in the future may well be amazed to recall I mentioned A, B and C as being important but said nothing about X, Y and Z. The ‘real composer’ however should feel no obligation except that of following his/her own instincts. Leave the labelling and cataloguing to the academics. As John Adams has so delightfully put it, in the future composers should be ‘free to play in the garden of all that’s been before’. A sense of freedom from history, from peer pressure and above all from concern about critical comment should be the aim and duty of every composer.”

In recent years, Sweeney composed three operas, The Invader (2015), The Green One (2016) and Ulysses (2017), wrote Hospital Voices (2018), a commission by Waterford Healing Arts Trust, and was also commissioned as part of the New Ross Piano Festival’s Ros Tapestry Suite series.

His work includes two symphonies, five concertos and many choral works, including the cantata Deirdre, commissioned by RTÉ, Memorials, which was commissioned for Cork International Choral Festival’s 30th Seminar on Contemporary Choral Music, and There is No Rose, which was included in Chamber Choir Ireland’s Choirland collection.

He was also the organist and choirmaster at Christ Church Cathedral in Waterford, and wrote a number of works for his brother, organist Peter Sweeney, who died in 2018.

In recent years, Eric Sweeney returned to other performances on organ, including improvisations for silent movies such as Nosferatu and The Cabinet of Dr Caligari. His work has been recorded by Dublin Guitar Quartet, John Feeley, New Dublin Voices, John Finucane and Elisavita Blumina, Gerard McChrystal and Kathryn Page, Olga Scheps, and Triocca

Sweeney was one of the first Irish composers to embrace a minimalist style and yet he was not uncritical of it. In 2007, he wrote “the time is surely ripe to assess what Steve Martland has provocatively called the main, if not the only, important development in musical style since the 1960s. The term minimalism has become outmoded as a means of stylistic definition and if we think of composers as diverse as John Adams, Arvo Pärt, Michael Nyman and John Tavener it is difficult to see what, if any, shared language their music illustrates. What is clear now is that music in our post-modernist world can be created from whatever elements the composer wishes and that it is the healthier and more genuine for that”.

He was a member of Aosdána and also served on the Arts Council between 1989 and 1993. In 1993 also, he was awarded a doctorate in composition from the University of Ulster.

Eric Sweeney is survived by his wife Sally, his children Catherine, Rachel and Manus, and grandchildren Rhian, Eoin and Lanna.

Eric Sweeney A celebration of his life will take place when circumstances allow.