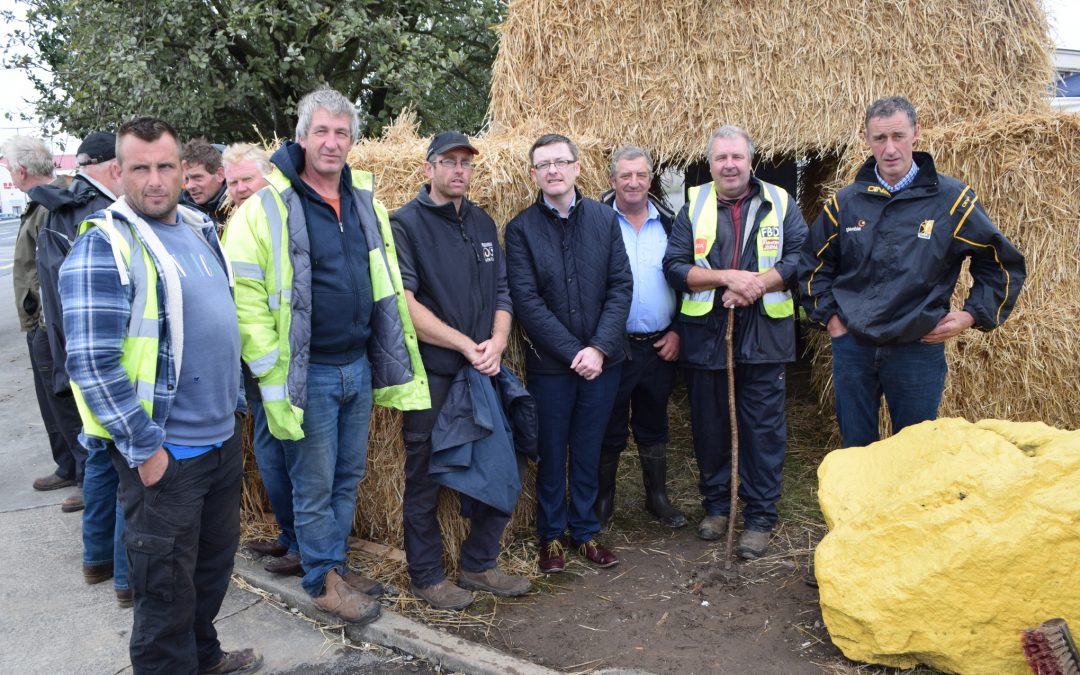 Eoghan Dalton Reports
There is a “high” chance farmers will resume their pickets of local beef processing factories – depending on the outcome of national talks. Pickets on local beef processing factories were lifted last Friday night as negotiations between national level stakeholders were announced. They had been maintained on a 24/7 basis for over 10 days as beef farmers’ anger reached breaking point.
But the Beef Plan Movement agreed to suspend its action and lead its members into the talks.
Dawn Meats in Grannagh and ABP Ferrybank had been the local targets of the pickets – resulting in just one cattle lorry passing through the picket between the two. However, Waterford Beef Plan Chairman Pat Kirwan hasn’t ruled out many of the protesters returning to the gates. “They were very reluctant to leave the picket last Friday. They wanted to stay on, they wanted to keep it going. But we were told that if they didn’t step down Beef Plan would not be at the talks,” he said.

A number of pickets elsewhere across the country have not stood down. Up to 23 factories were blockaded at the protest’s height last week. The Kilmacthomas farmer told the Munster Express that there remains a “very high chance” of them mounting pickets once more if talks go awry. “I’ve never seen that level of anger and frustration in farmers. It definitely can’t be ruled out.”
In a whirlwind week during the Dawn Meats protest, it emerged the factory had placed 150 workers on protective notice. Meat Industry Ireland also said it would be seeking legal action against protesting farm groups as its kill count was plummeting. This was described as “scare tactics” by IFA national treasurer Tim Cullinan and “counter-productive” by the group’s president Joe Healy. The picket at Dawn Meats also saw a large number of farmers join in support, with as many dairy farmers as there were beef.
Farm organisations, Meat Industry Ireland and the Department of Agriculture met yesterday (Monday) afternoon to discuss the situation.
According to the farming press, the meeting’s agenda includes an overview of the meat market, strategic challenges facing the industry, the quality payment system, carcass classification and market transparency.
The last of these was highlighted by South Kilkenny TD Bobby Aylward (FF) as a necessity for the industry going forward:“There’s something very unfair about the price farmers are getting for their beef compared to what the factories and retailers are able to get. I think it isn’t right on the primary producer.
“Someone is cleaning up on the price and it needs to be looked at by the consumer association.”
Meanwhile, Waterford TD David Cullinane (SF) said beef farmers have seen “a huge reduction in the price being paid for their animals. Family farms are being replaced with factory lots – the least environmentally sustainable”. “Family farms who produce high quality beef are being squeezed,” he added.
The key reasons cited by beef and suckler farmers for the protest lay with the share they have getting for the supplying the product to factories. It is estimated that beef and suckler farmers currently take a 20 per cent financial cut off each animal but spend an extensive amount of time readying that animal before it reaches dinner tables.In leaflets passed around at the pickets, farmers used the example of beef worth €10. The retailer will get over half that figure and the processing factory will see a return of €2.90.