But more support needed for city’s Chamber Gift Vouchers
Footfall and overall spend in Waterford prior to and after Christmas 2019 are both reported to have increased on the previous year’s figures.The success of Chamber gift vouchers has been cited as a major contributing factor to the city and county’s economic success. However, a call has been made by Waterford Chamber encouraging local businesses and the public to continue to support ‘shop local’ campaigns. “From speaking to our members, it is apparent that footfall and overall spend was up on last year,” said Gerald Hurley, Waterford Chamber CEO.
“One multi-national retailer confirmed to us that sales were up 2% and footfall was up 4%. Another well-known local business said footfall was definitely up and they believed that Winterval and the various shop local campaigns contributed significantly to that.”
Mr Hurley said a huge amount of effort and investment had gone into creating a Shop Local Campaign in the lead up to Christmas.“We are happy to report a 6% increase in sales of the Waterford Gift Voucher, which equates to €91,000. That money is guaranteed to stay in Waterford and while we welcome any increase and appreciate the support of those who purchases vouchers, we still need to be doing much, much more.”
Examining the figures in detail, Mr Hurley said the figure of €91,000 equates to just 37 companies who have supported the scheme.Comparing the city to Dungarvan, he noted that in 2019 Dungarvan sold €625,000 worth of vouchers while Dundalk has obtained €1 million in sales. “We have over 160 redemption partners so there is no excuse for the lack of choice reasoning,” said Mr Hurley.
“This year we intend to work even harder on promoting the scheme but it is imperative that all businesses consider using the Waterford Gift Vouchers when rewarding staff, not just at Christmas but throughout the year. They are a tax efficient way of rewarding staff and unlike other vouchers, you are guaranteed the money is supporting a local retailer. Now, businesses and the public need to make the conscious decision to use them. It’s a circular economy and everyone benefits.”
Mr Hurley noted that a number of retailers said they saw a marked increase in November of 2019. “A number of businesses with an omni-channel approach in terms of online and retail premises said they now believe that their online sales were a huge factor in the increase in turnover,” he explained. “They are confident that providing both platforms and successfully blending traditional and digital processes to convert into positive sales growth is the future.”
Dungarvan success

Dungarvan’s success with its Chamber Shopping Vouchers continued in 2019, keeping a whopping €625,000 in the local economy. This significantly surpassed 2018’s record by €125,000. “The growth in awareness regarding the importance of shopping local is outstanding,” says Jenny Beresford CEO of Dungarvan & West Waterford Chamber.
“Local people are choosing local vouchers that support over 120 businesses and keep our economy active and vibrant throughout the year. The dramatic rise in the amount of vouchers sold in 2019 is beyond encouraging and demonstrates very clearly that the people of Dungarvan and West Waterford are fully behind their local economy and willing it to prosper.”
“It’s a win-win,” added David Walsh, Chamber President. 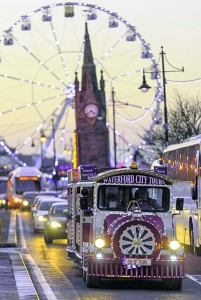 “The recipient has the choice of over 100 businesses where they can use their voucher and the purchaser knows they are keeping business local and securing jobs.” Mr Walsh is inspired about the will to keep business local. “Monitoring the voucher sales from corporate purchasers and individual purchases we can clearly see that both markets have increased their spend,” he said.“Also, more people are gaining awareness about the vouchers every year which is adding to the phenomenal increase in voucher sales over the past couple of years. Its excellent to see that people are more conscious than ever to support their local economy this is the perfect way to achieve this.”
Meanwhile, it’s estimated that over 70 new jobs were created during Dungarvan Aglow.
Research from Aglow 2019 , gathered from 78 businesses who contributed feedback to the review, shows that 56% of business surveyed reported an increase in business and 84% of businesses saw either an increase in footfall or it remaining the same as 2018.
Regarding employment, there were 37 new full time jobs created, 35 new part time jobs, while 245 part timers had their hours increased.
The events organised directly by the Aglow volunteers included the turning on of the Christmas lights, naming of the illuminated characters by primary school children, the Christmas fairy trail, the vintage bus tour of the lights, the Main Street Children’s Tractor Run and the Cycle with Santa on the Greenway.
Exact figures in relation to the success of Winterval and its economic spin-offs were unavailable, however Winterval Festival Director Tommie Ryan said: “Over 500,000 people came out in their droves to experience Winterval, Ireland’s Christmas Capital. This year’s festival was the best yet, and that is down to our fantastic traders and suppliers, who created a magical experience in Waterford city. Also a special thanks must be expressed to our sponsors, who have played an integral role in the event. This festival wouldn’t be possible without them, and of course our festival audience, many who travelled from across the country to celebrate Winterval in Waterford city.”