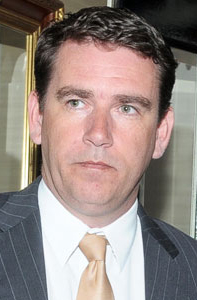 Eoghan Dalton Reports
The result of an internal review in to bullying allegations in Waterford Fine Gael has been delayed.It is now understood the verdict will not be revealed until next month at the earliest.
Party Secretary Tom Curran had visited Waterford in the first week of July to investigate a complaint surrounding a meeting at a Dungarvan hotel. Interviewees were told that a result could be expected within a fortnight of his visit.
However the complainant in the case – local election candidate Fiona Dowd – has told The Munster Express that she has heard “no word” since. Ms Dowd said the furore in the party has not died down either. She pointed to the resignation of one member with 54 years membership behind him, who has stepped away as a result of a wider dispute concerning many party members and TD John Deasy.

The episode has been part of the wider controversy around Deputy Deasy, who suffered an unanimous vote of no confidence at the Dungarvan meeting. It came following an elections campaign which saw almost all of the party’s sitting Councillors claim that the TD has been absent from constituency matters.Deputy Deasy, who is a Dáil envoy to the US on immigration, responded by alleging that bullying has been a regular feature of Waterford Fine Gael in recent years, turning off his own supporters.
Ms Dowd also submitted a formal bullying complaint subsequent to the meeting in Lawlor’s Hotel. It relates to an incident with former Senator Maurice Cummins.While she met with Secretary Tom Curran for over an hour at the start of July, she told this newspaper there has been no correspondence since. “No word – I haven’t heard a thing,” she said. Ms Dowd, who is based in Dunmore East but failed to be elected for the party last May, said she has not been participating in party matters while the review is outstanding.
She added that she believes the summertime might have caused a delay in a result.
Party sources indicated this to be case and noted a similar problem may also delay any discipline decisions being handed down by the party’s executive council. The governing body doesn’t sit in August but will resume its work in September instead. While Mr Curran also met with Deputy Deasy during his visit to Waterford over a month ago, it is understood his own bullying allegations are not being investigated.
Neither is the party’s local members’ no confidence vote in the TD set to be addressed in the coming weeks according to sources. It is also currently unclear whether the review will be published or if only its interviewees will be allowed to read it. Maurice Cummins, who also met with Mr Curran last month, stepped down as chairman of the Waterford branch during the local election campaign, and wants Deasy to consider his position as TD. Attempts to contact Mr Cummins were not successful while the Fine Gael press office declined to comment on the issue.