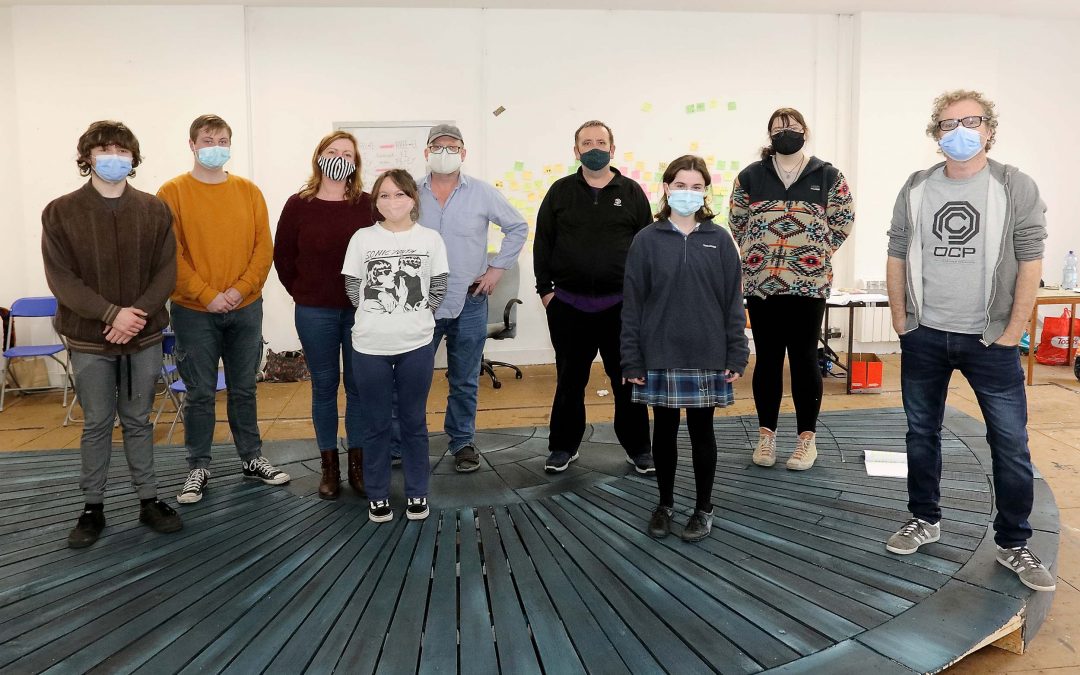 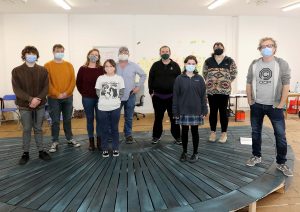 Rehearsals for A Christmas Carol, which opens next week at Garter Lane, have been picking up pace over the last few days with the cast and production team eagerly awaiting the opening night of this Christmas classic next Wednesday (December 1st).

This adaptation of A Christmas Carol by writer/director Liam Meagher, brought to the stage by the producers of The Red Iron, is the ultimate Christmas Classic for the entire family.

A timeless tale of heart-warming joy and redemption, A Christmas Carol tells the story of Ebenezer Scrooge and how society can be transformed for the better through human generosity, kindness and compassion.

First published in 1843, Charles Dickens created this Victorian classic drawing on observations of the lives and dire straits of the poorest people living in London at the time.

Ebenezer the miser has closed his heart to memories he would rather forget. With Christmas Spirit disrupting his normal business routine, and visitations from his deceased business partner Jacob Marley, Ebenezer is faced with his past, and the decisions he has made on a lonely life’s quest, that of satisfying his greed.

“If I had my way, every idiot who goes around with Merry Christmas on his lips would be boiled with his own pudding, and buried with a stake of holly through his heart. Merry Christmas? Bah humbug!”

Stage manager Alan O’Toole is happy with the way the production is shaping up and says that theatre goers are in for a real treat. “The cast have really been working hard for the past few weeks and I think this is going to be a wonderful production. The last 19 months have been terrible for anyone involved in the Arts and everyone is eager to get back on stage and have really poured their hearts and souls into rehearsing this Christmas classic.”

Co-producer Michael Grant stresses this is most definitely a show for the entire family and he’s confident the three-week run will be well supported. “Booking has been open for some weeks now and is going well, particularly at the weekend. This is a production that the whole family will enjoy. It’s been fantastic to see our director, writer, stage manager, set and lighting designer and our actors back on stage and doing what they love after a very tough 19 months. Garter Lane have done everything they can to make a night at the theatre as safe as possible. The auditorium is fitted with a fresh air system, so fresh air from outside is pushed into the theatre while stale air is pushed out and  this process is on-going throughout performances. The audience will need to produce a covid cert and mask wearing will be mandatory. It has been a challenge in these times we live in to get this production to the stage I’m confident it will be an excellent and thoroughly enjoyable experience.”

Michael Grant has a long history in Waterford Theatre dating back to the 1970’s when he first booked the Theatre Royal at age 16 for a bunch of kids from the top of the town calling themselves the City Entertainers. Michael progressed to directing shows during the manic ‘Tops” days making two national finals and six national semi-finals. He then exited for a life in business as a director with Suir Engineering Ltd, not returning to showbusiness for nearly twenty years.

Upon his return, he teamed up with Pádraig Ó Gríofa and produced many Theatre Royal Variety Shows, radio documentaries and radio drama, eventually working with good local writers such as Pat Daly, Tony Corcoran and Jim Nolan to produce wonderful theatrical drama and some good comedy.

A Christmas Carol is once again a joint production with Pádraig Ó Gríofa. The pair’s last production was also in Garter Lane Theatre with ‘The Red Iron” in November 2019, written and directed by Jim Nolan.

Before that, the riotous ‘Bilberry Goats’ was staged February 2019, written by Tony Corcoran.

Pádraig Ó Gríofa’s journey in theatre began at the age of six as part of a school theatrical production. Pádraig’s initial forays into acting throughout his childhood and teenage years led to an interest in producing shows. Pádraig re-established Waterford Pantomime Society with his close friend Jimmy Kelly in 1984. The production duo went on to produce all performances by the society for the next 20 years before retiring.

Pádraig and Michael separately attended a production of A Christmas Carol in London 15 years ago starring the great Tommy Steele. Since viewing this production they have both been eager to bring a production of this show to Waterford City and the south-east.

After 18 dismal months for Ireland’s creative and cultural sector, the opportunity to realise this magical piece of theatre on a stage with actors and an audience is now possible.

Liam Meagher has worked in the Waterfords art scene for more than 30 years, from the early days of Red Kettle to Little Red Kettle for whom he still writes and directs the annual school interactive show. He has also worked extensively with Waterford Youth Arts and The Healing Arts Trust. He has also directed numerous short films with the SWAY project in St. John’s Park. He is delighted to be working with such a fantastic all-Waterford cast on this production.

Dermot has been a full-time professional artist and theatrical practitioner for over 30 years. A founding member and former Artistic Director of ‘Spraoi’ Street Arts Festival in Waterford Ireland, he is currently the Technical Manager at the Theatre Royal Waterford.

With a wide range of experience in the areas of set design, lighting design, performance direction, devising and production, his work has won numerous awards and has enjoyed extensive media coverage.

Andrew trained with the Gaiety School of Acting and The London School of Musical Theatre.

His previous credits include appearances with The Gate Theatre, The Cork Opera House, Waterford Spraoi, Little Red Kettle, Bryan Flynn Theatrix and Long Road Productions amongst others. Other appearances include The Gods Are Angry Miss Kerr by Jim Nolan, Dissident by Pat Daly, a European tour with Riverdance, a national tour of The Collector and The Lonesome West at The Everyman in Cork. Most recently Andrew appeared in The Shakespeare Review at The Theatre Royal Waterford for the third time and The Eugene O’Neill International Festival in New Ross.

Shauna is a professional actor, director and writer based in Waterford city. She is a drama facilitator and actor with Little Red Kettle and has performed with Garter Lane Arts Centre, The Theatre Royal and Red Kettle Theatre Company and on the prestigious stages of the National Theatre, London and the Irish Arts Centre, New York. Shauna is the casting coordinator with Spraoi, Waterford as well as co-founder, director and actor for Rigout Productions, creating collaborative multimedia works for the past nine years. Productions include “Lackendara Jim”(director), “Raven’s Watch”(director), “Boundary”(director) and “Petticoat Loose”(lead actor). Shauna is an active member of the Waterford Film Centre where her Arts Council awarded screenplay “So This is it” is currently in the production stage.

Sinéad is an actor, director, costume designer and stage manager from South Kilkenny. She has just finished her final year in MTUs Theatre & Drama Studies where she became interested in costume and makeup, prop and set design, directing, sound design and stage management.

She started her theatre journey when she joined Waterford Youth Arts at eight years old.

Since then she has participated in many of their shows and even produced a Works in Progress showcase in 2017. Her most recent work includes: stage managing ‘Love and Information’ by Carol Churchill, directed by Regina Crowley, Assistant stage manager/set builder/voice coach for ‘Stolen Time by Martina Collender, directed by Liam Meagher,  Alice in the ‘Halfpenny Opera’ written and directed by Johnny Hanrahan. Earlier this year she was the costume designer and assistant director of the WYA summer production of  ‘Romeo & Juliet’ which was directed by Jim Nolan.

A professional actor, director and writer for over 30 years, Joe has worked and toured extensively with theatre companies such as Red Kettle, Corcadorca, Rigout Productions and Broken Crow. He has also appeared in several programmes on RTE Radio One including The History Show, The Johnny Coffin Diaries and The Reindeer That Got Left Behind. Joe also teaches drama to young people and is a regular member of the Little Red Kettle team that tours annually to approximately 70 primary schools throughout the southeast and as a musician and songwriter is a member of Waterford band Birds of Burden and recently released a solo album entitled On Unforgiving Themes with The Remains of Reason Ensemble.

He is delighted to be involved with this innovative new production of one of the great classics of western literature.

Kieran is an actor, a reactor, and pro-tractor. He began in Loose Screw Theatre’s Boxer, and since then has worked on productions of The Crucible, Our Town, Shadow of Heroes, One Hundred Thousand Breaths, Henry VI Part III, Six Days’ Work, Wife to James Whelan, The Hall, The January Show, Assassins, Raymond & Dutch: The Case of the Last Green Bag, and, in recent years, Macbeth and (eventually) Prince of Denmark. He also absconded to Russia to appear in the television series Пекарь и красавица, which is exactly what it says on the tin. 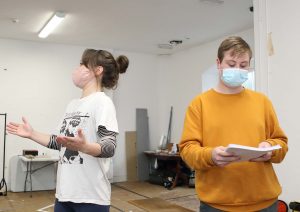 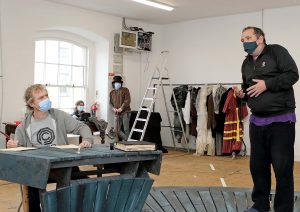