A kind stranger in a city centre store…

AN ORDINARY shopping trip to a city centre store turned into an extra special occasion for one Waterford woman last week. 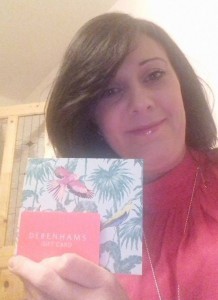 A delighted Caroline Whelan with her gift voucher which she received from a kind stranger.

Caroline Whelan from Faha, Kilmacthomas was in Debenhams, City Square on Wednesday afternoon last when she received a phone call from Cork University Hospital (CUH) in relation to her husband’s ongoing battle with a brain tumour. Thomas was diagnosed with a brain tumour in 2015 and has been attending CUH for treatment and monitoring ever since. A representative from CUH rang Caroline last Wednesday to discuss concerns which she had expressed. A nervous Caroline received the call while in a Debenhams’ changing room, and was thrilled to hear that Thomas is continuing to do very well.
After exiting the changing room, a Debenhams Sales Assistant informed Caroline that a lady who had occupied the changing room next to her had overheard the phone conversation and, after being incredibly moved by Caroline’s clearly relieved and overjoyed reaction, had decided to leave a gift. The anonymous shopper had purchased a gift voucher for a significant amount and instructed a Debenhams Sales Assistant to give the voucher to Caroline when she exited the changing room.
Caroline said she was incredibly moved by the kind gesture.
“I started crying because it was such a kind thing to do. And then the Sales Assistant gave me a hug! I asked if the lady was around but she had left as she didn’t want to be thanked.”
Caroline said she hopes that the lady realises the impact which her kind gesture has had and wishes to thank her for her kindness.
“It was such a sweet thing to do,” said Caroline.
“She obviously felt moved to doing something nice. Maybe my conversation triggered something in her. She may have gone through the same experience.”
Caroline and Thomas also praised the support they received, and continue to receive, from staff at CUH. 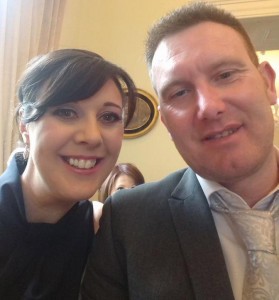