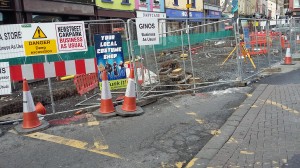 Significant excavation work is causing disruption for some local businesses in the Apple Market.

BUSINESSES in the Apple Market have expressed concerns over disruption caused by ongoing works in their area.
Work has been ongoing for a number of weeks in the Apple Market area which has resulted in a new traffic layout and restricted pedestrian access in certain parts.
Raising the issue at last week’s plenary meeting of Waterford City & County Council, Cllr Joe Kelly (Ind) said the Apple Market currently “doesn’t look well”.
He said the works were having a “negative effect” on businesses in the area and causing widespread disruption.
Cllr Kelly asked when the works would be completed; however, he was told by the council executive that the issue was for the Metropolitan District council to discuss.
Commenting on this, Cllr Kelly told The Munster Express that it was “outrageous” that councillors were being told they couldn’t discuss issues which were specifically mentioned in the Monthly Management Report which came before the plenary council.
“Waterford City & County Council needs to get its act in order,” he said.
“I raised an issue which was mentioned in the Management Report and there was a refusal to provide an answer.”
A number of other councillors were told that the issues which they raised at last week’s plenary meeting should instead be directed to their respective district meetings.
Highlighting the importance of the issue which he was raising, Cllr Kelly said businesses in the Apple Market area have very genuine concerns.
He says that the ongoing works, although necessary, are causing widespread disruption which is negatively impacting on some businesses.
Cllr Kelly noted that these businesses may have to endure long spells of similar disruption when proposed developments in the area go ahead.
Meanwhile, Cllr Mary Roche (Ind) also noted that roads seemed to be “dug up in every corner of the city” at present.
She expressed her hope that these works would be completed in time for Christmas.