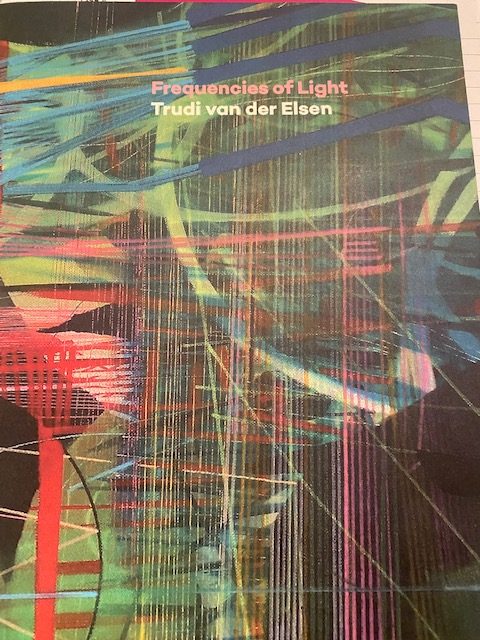 GOMA (The Gallery Of Modern Art) Lombard St, is first into new exhibition mode with a 2021 Emerging Curator Awardee show. 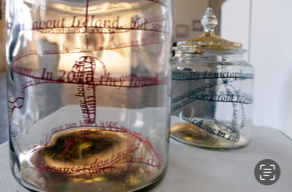 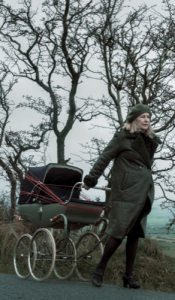 In partnership with the Theatre Royal and funded by Waterford City and County Council and The Arts Council, Valeria Ceregini was the successful applicant. Her selection for this exhibition, Breaking Borders, deals with mostly video content that sets out to explore “the intersection of multiple narratives and discourses in the arts”. The exhibition is linked to socially distanced talks and some aspects of performance art.

Trudi van der Elsen is based in the Ennistymon Courthouse Gallery, and she has four acrylic on canvas paintings with the themes of Drift and Adrift, with dramatic use of colour and geometric patterns and repeating lines to provide visual spectacle.

Beata Pickarska-Daly has On The Shore, a video where a whit-ish ball has a life of its own on a bleak beach where the incoming tide keeps the ball ashore. It reminded me of the large ball image from the iconic TV show The Prisoner, filmed in Portmerion.

Bernadette Hopkins is a supporter of the Donegal Rights Of Nature group, and her video Our Bodies, Their Borders, is an intriguing study of an artist wrapping a tree and an old-style baby pram in bright red yarn or thread. Reminded me of the knitted work of Tramore-based wool artist and actress Grainne Kavanagh, who has a knitwear business, KavKnits. The vivid impact of the red yarn was so impressive.

The Serbian artist Vukasin Nedeljcovic had a slideshow projection with audio – Asylum Archive, looking at a possible and actual asylum accommodation in the West of Ireland. There were no signs of life, no people, and there was a depressing feeling that behind a white gate adorned with four rusting white shamrocks, there are another world of statues, toys, Coca Cola dispensers, rusting bicycle parts, soiled mattresses, and signs proclaiming ‘Chrish Children’. This artist had documented the position of exile from his homeland where he was involved with a Liberal Democratic Party and with a resistance movement in 1995 when his country was ravaged by war and ethnic cleansing. 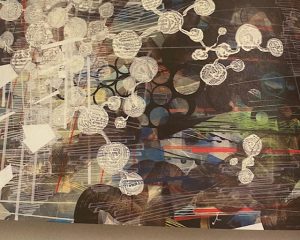 Nicola Anthony’s work in glass vessels, A Disposal Of Displacement, nearly didn’t make the exhibition due to post-Brexit customs charges and work coming from the UK is now subject to customs clearance and additional documentation. 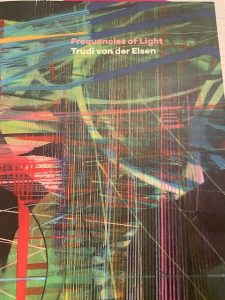