COFFEY AND CULLINANE ROUND ON BUTLER'S UNIVERSITY STANCE

In a rare moment of public consensus between Minister Paudie Coffey (FG) and Senator David Cullinane (SF), both rounded on Fianna Fáil candidate Mary Butler’s call for WIT to ‘go it alone’ in pursuit of a third level upgrade.
During the WLRfm General Election debate recorded at Garter Lane on Wednesday last and broadcast yesterday (Monday) morning, Councillor Butler stated that strong ministerial representation in Wexford and Kilkenny had brought about WIT and Carlow IT’s ‘forced merger’ in a potential Technological University.
“I am not in favour of forced mergers…and I think it’s imperative that we’re not forced into “And I think it’s imperative that we’re not forced into a merger just for the sake of satisfying some ministers’ egos,” she said. “I think it’s very important that we go it alone. I think we’re good enough and big enough to go it alone in Waterford.” 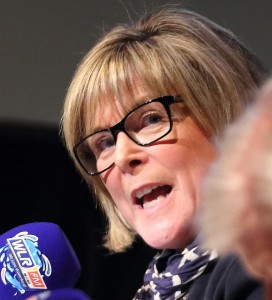 Addressing debate moderator Billy McCarthy, Cllr Butler said that both she and FF Education and Skills Spokesperson Charlie McConalogue had met with WIT management prior to Christmas.
She added: “And they expressed, quite vehemently at the time, that they were quite prepared to go it alone and that was their preferred choice. And we would be supporting that 100 per cent.”
Senator Cullinane, who said he has “worked constructively with the Government” on this issue, feels it’s important that Waterford and the south east “shouldn’t be divided on this”.
He added: “We need a university. I support a Technological University but my criticism of the Government is the process; that we haven’t had a vision; we don’t have a model of what that university would look like and that has allowed vested interests and people who are against this – in the Department (of Education), the Higher Education Authority and other universities to divide us.”
Stressing his ongoing commitment to work with government and opposition on the issue during the 32nd Dáil, Senator Cullinane added: “Promising people that we can deliver standalone universities when it’s not possible is just playing to the gallery to get cheap votes and it’s not going to do anything for the people of Waterford. Fianna Fáil were in power for decades and have not delivered a university for Waterford.
“We need a Technological University for Waterford. We don’t need false promises. We need delivery of a university and for Waterford to be a university city and we all know that critical mass is important in these big infrastructural projects. The south east has a population of 500,000 and that’s our best route to a university. Anything else (promised) is playing games with the issue and is just trying to deceive the Waterford electorate.”
Minister Coffey described Cllr Butler’s declaration as “incredible” given that during Mary Hanafin’s time as Education Minister “during the Celtic Tiger years when all of the funding was there”, that Waterford IT hadn’t been upgraded.
Stressing the role he played in ensuring that the commitment to WIT’s academic upgrade was included in the 2011 Programme for Government, Minister Coffey welcomed Senator Cullinane’s “constructive approach” to this matter. 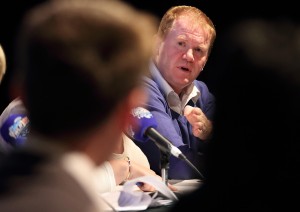 “There is opposition in the HEA, there is opposition in the Department of Education and there’s opposition from other universities, because if another university is created here in the south east, we are then going to be taking a slice of their funding cake, and that’s a reality that we all need to work together on and to challenge so that we can deliver a university for the south east region.”
Meanwhile, Una Dunphy (PBP – AAA) claimed that the Waterford/Carlow model “was not the way to go”.
Referring to her meeting with former Higher Education Chair Michael Kelly, author of a Government-sanctioned report into the ‘TU’ process, Ms Dunphy claimed “it was put to me that it was this way or no other way, and I don’t think that’s acceptable”.
She continued: “We’re the only city in the country that doesn’t have a university. We deserve one. We’ve 11 per cent of the population (in the south east). We should have a university and we should be able to do any subjects or any modules in our local third level institute.”
In a January 26th statement, WIT’s Governing Body agreed to recommence engagement with IT Carlow with respect to the TU process.
“WIT is committed to the delivery of a Technological University in the South East to ensure the economic, social and cultural advancement of the region,” read the statement.
“The Governing Body has said that a merger application will be only be committed to if it is confident that delivery of an appropriately resourced Technological University for the South East is the outcome of such a merger.”
The candidates were responding to a question put to them during the debate by Waterford Chamber Deputy President, Laurent Borla (MD of Senantra Ltd).
* Many thanks to WLRfm for inviting The Munster Express to both of their debates.