Culture on the coast 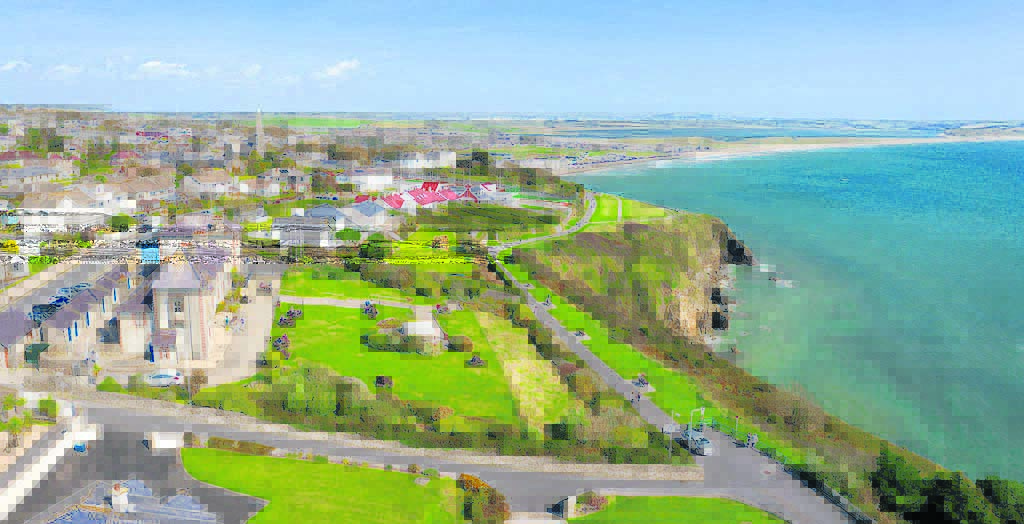 Despite the challenges posed by Covid-19, all involved with Tramore Coastguard Cultural Centre are looking forward to a bright future
The old Irish seanfhocal ‘Ní neart go cur le chéile’ is included on a Covid-19 information board at the entrance to the Tramore Coastguard Cultural Centre. This adage tells us that ‘There is no strength without unity’ and this is certainly apt for describing what has been achieved at this remarkable location.
The aim of the Coastguard Cultural Centre is to develop art, culture, and heritage for the community of Tramore and the surrounding areas.  Prior to Covid-19, this multi-purpose community facility was a hub of activity with regular exhibitions being held in its impressive upstairs art gallery. This space was also used for art classes, yoga, children’s activities, book launches, intimate musical sessions, and many other activities. Downstairs, the Coastguard Cultural Centre’s café has garnered a well-earned reputation for a mouth-watering array of treats.

The building, which boasts enviable panoramic views over Tramore Bay, originally served as Tramore Coastguard Station from 1874 to 1922. It was home to Tramore Garda Station from 1924 to 1988. Unoccupied throughout the nineties, it was badly damaged in a fire in 2000.

In 2002, the Office of Public Works (OPW) commenced work to restore and preserve the property. Every effort was made to retain the architectural and historical integrity of the building and it was officially opened in 2004.
Now, another chapter of the building’s history is being written due to the Covid-19 pandemic.

Proactive in a pandemic
Project Manager at the Centre Colin O’Brien had just assumed his new position in February when the Covid-19 pandemic struck.
Unsurprisingly, this presented a whole host of challenges. However, he says members of the Board of Tramore Development Trust (which manages the Centre) were keen to make the best of a bad situation.
Channelling a ‘Keep Calm and Carry On’ attitude, it was agreed that lockdown presented an opportunity to embark on some improvements to the interior of the building.

By the end of May, the Café was operating as a takeaway using a sash window overlooking the bay.  In late June, the Centre had returned to some semblance of normality in a newly refreshed building.
“People had been in lockdown for quite some time, so many were waiting for an opportunity to come back and meet up with their friends,” explains Colin.

Although numbers were restricted due to social distancing, a ‘can do’ atmosphere prevailed as all involved proactively and enthusiastically adjusted to their new circumstances. Along with a team of hard-working staff, the Centre also has the valued support of Tús and CE scheme workers.

In September, the Centre played host to an art exhibition by Emma Power and Fern Wright.  Currently, paintings by artist Janet Sibley adorn the Centre’s walls. However, along with the rest of the country, Tramore finds itself back in another lockdown.

The Café remains open seven days a week but is now solely operating its takeaway service once again. Last week, even on a blustery October morning, there were plenty of people availing of this service, stopping to breathe in the fresh air and to admire the stunning views of Tramore Bay.

Colin explains that having the takeaway service in operation also means people can still view the crafts which are on display within the Centre, albeit in a more restricted manner.

Creative collective
There is an eye-catching array of impressive items on display within the building, which showcases the work of a progressive group known as the ‘Coastguard Creatives’.

This craft collective, comprised of local craftworkers, designers and artists and facilitated by Marie Power of ‘The Sea Gardener’, is an initiative by Tramore Development Trust and Waterford Local Enterprise Office (LEO). A wide range of high-quality products are available, including jewellery, glassware, soaps, clothing, metalwork and woodwork, skincare, knitwear, art, and ceramics.

Considering most craftspeople generally work in isolation, the aim is to try to develop a supportive network which allows for increased collaboration. The initiative has proved so successful that the collective is now in contention for a coveted award in the Micro Enterprise category of the Irish Business Design Challenge (voting can be completed at www.ibdc.awards.com)

If successful, funds will be used by the ‘Coastguard Creatives’ to further develop their collective, especially in relation to retail display and their website.

Earlier this year, thanks to the assistance of a LEO grant, the ‘Coastguard Creatives’ were able to establish an impressive website (www.coastguardcreatives.ie) through which online purchases can be completed. A click and collect service is also in operation at the Centre.

Marie Power says there has been a great reaction amongst the public.
“Within the last few weeks, there’s been a noticeable increase in people being conscious of buying local,” she says.

There had been plans to operate a Christmas shop at the Centre from mid-November onwards. Instead, it’s now hoped that this shop can be opened when the current Covid-19 restrictions are lifted in early December.

Meanwhile, there are other exciting plans for Christmas which include lighting up this imposing building as well as the creation of a Dickensian style Christmas courtyard.

Development Trust
Chairperson of Tramore Development Trust Anne Harpur says their aim for Christmas is to give something back to the local community. This reflects the ethos of the Trust and their appreciation for ongoing community co-operation.

The Trust describes its role as “acting as a catalyst for change” and aims to work with stakeholders in Tramore “to utilise their assets for the benefit of our community and visitors.” The community led voluntary organisation was formed in 2000 and is a company limited by guarantee with charitable status.

Their mission statement outlines the Trust’s aim to “foster a vibrant heart within Tramore by encouraging social integration and by harnessing our resources, our people and our unique natural environment”.
Among their key objectives is to bring functionality and sustainability to buildings which are no longer in use. The Development Trust manages the beautiful Lafcadio Hearn Japanese Gardens and completed the conversion and refurbishment of the former Friends Meeting House.

Celebrating 20 years in existence this year, Anne says the experience which the Trust’s members have amassed during this time has helped them tackle the challenges posed by Covid-19.
“There is a fantastic team of committed people who love living in Tramore,” she explains.

Anne says there was a determination to ensure the Trust’s projects could continue operating at a time when such amenities are needed more than ever.
The Trust’s members hope their plans for Christmas will provide a lift for the town, especially the Centre’s eagerly awaited ‘Star of Hope’ light installation which will overlook the bay.
“It’s so important that we have light during these times,” says Anne.  “This star can act as a central light source for Tramore and a beacon of hope.”

She praised the ‘Coastguard Creatives’ and is heartened by the “organic” growth of the group.
“There are so many gifted people in the area,” she says.

Overall, Anne believes the success of the Centre showcases “the power of community” and she is thrilled by its demographic diversity. “It’s so healthy to have a gender, age and socio-economic mix,” she adds.
Treasurer Louise Grubb is also delighted that so many different groups use the Centre, which she describes as having a “very quirky atmosphere”. She believes the vibrancy of the ‘Coastguard Creatives’ perfectly illustrates the positivity which exists.

Louise adds that local people are very proud of Tramore and she predicts that this sentiment will increase.
“You could be in lockdown in a lot worse places!” she says.

Describing the Centre as a “hidden gem”, Louise says many people are now waking up to what is on their own doorstep.
“This pandemic has brought the community closer together. You can really feel the sense of community,” she says.

Positive future
Colin O’Brien believes the ongoing success of the Centre is a great news story during such a prolonged period of doom and gloom.
“Tramore offers so much and we’ve now come to appreciate going for walks within our 5km radius,” he says.

Colin highlights the many different amenities which are accessible to people living in Tramore such as the Guillamene, the sand dunes, and the stunning Doneraile walk which offers direct access to the Centre.
He says the Centre diversifies Tramore’s offering for both locals and visitors alike. However, with many people still tending to gravitate towards the Promenade area, he believes the Centre can sometimes be unintentionally overlooked.

A native of Edinburgh, Colin moved to Tramore in October 2014 and was delighted to integrate into a community he describes as “very friendly, encouraging and enterprising”.
It’s abundantly clear that all involved with both the Tramore Coastguard Cultural Centre and the Tramore Development Trust have a huge passion for what they do and the area in which they live.

Their enthusiasm and proactive nature brings to mind another Irish seanfhocal: ‘Tús maith leath na hoibre’ or ‘A good start is half the battle’. By seizing the initiative earlier this year, they have ensured they are well placed to weather the Covid-19 storm.

They are now also well positioned to continue making their admirable contributions to local community life.
“It’s easy to give in but we have to keep looking forward,” adds Colin. “I see the future as being great for Tramore.”