Down at the Lithuanian Way 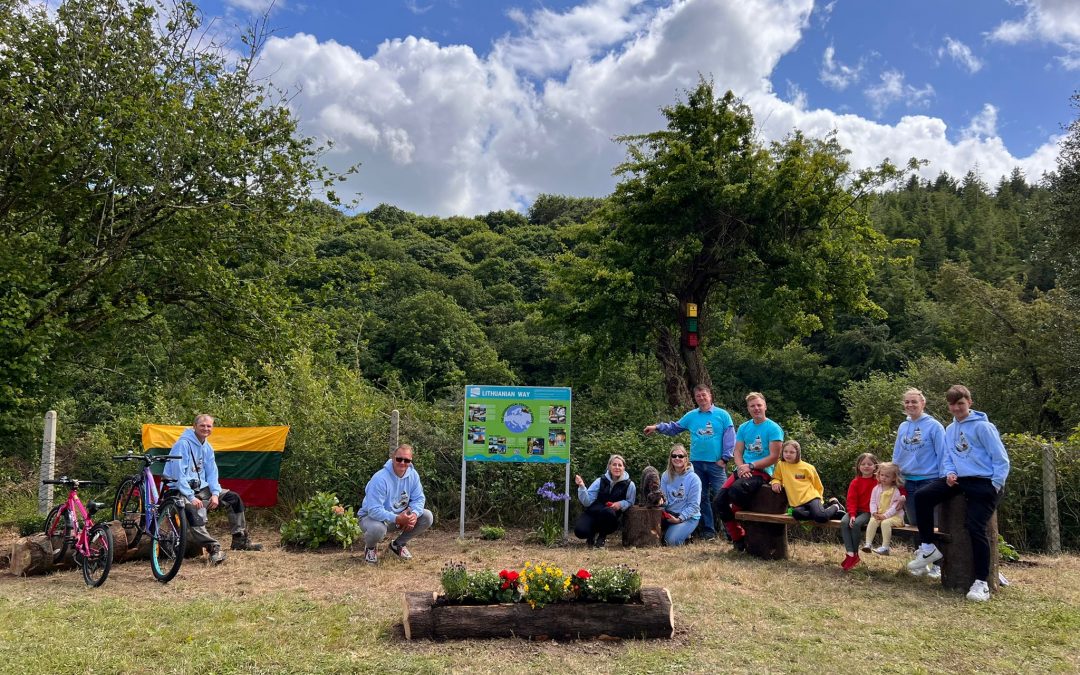 Lithuania is situated on the south-eastern shore of the Baltic Sea and is the largest of the three Baltic states with a size of 65,290 km² and population of 2.65 million people. Its capital and largest city is Vilnius, while Kaunas and Klaipėda are other major cities.

Lithuania, surrounded by Latvia, Belarus, Poland and Russia, has a long and colourful history. The original settlers in the country were Indo-European Balts with the name ‘Lithuania’ being mentioned for the first time in an account of the mission of St. Bruno on March 9th, 1009. Through the Middle Ages, Lithuania was noted on world maps, and on July 6th, 1253, Mindaugas, was crowned King of the country.

During the 14th century, the Grand Duchy of Lithuania was the largest country in Europe, including the lands of present-day Lithuania, Belarus, Ukraine, and parts of Poland and Russia, extending from the Baltic to the Black Sea.

On March 11th, 1990, a year before the formal dissolution of the Soviet Union, Lithuania became the first Baltic state to declare itself independent, resulting in the restoration of an independent state of Lithuania.

In 2004, Lithuania was among ten countries to join the European Union. Subsequently, many Lithuanians moved to Ireland to find work and embark on a new life.

Their arrival coincided with the booming years of the Celtic Tiger. Many found work in construction, retail, hospitality, and factories.  It’s estimated that there are now over 36,000 Lithuanian citizens residing in the country, with about 1,000 here in Waterford.

Žaneta Svirskiene has been living in Ireland since 2004. She attended college here and now works in accounts.

“We came to earn money and then started building our lives here,” she says. “It’s our home. I have been living here almost 20 years.”

She loves her life in Waterford and says her community has been warmly welcomed.

“People from Waterford have helped and supported us,” she says.

Through a dedicated Facebook page, members of the Lithuanian community in Waterford are in regular contact, organising various events and activities.

A highlight on their social calendar each year is the popular summer camp which takes place at Woodhouse Estate in Stradbally during the August Bank Holiday Weekend.  This event will take place again this year, with the kind permission of Jim and Sally Thompson.

In total, 250 Lithuanians from throughout Ireland will travel to Stradbally for this gathering (registration is required and this year’s event is at full capacity). 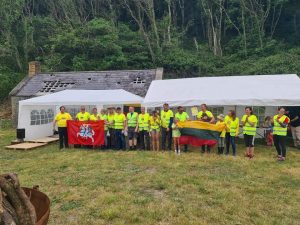 Lithuanians pictured at the summer camp which is held at Woodhouse Estate, Stradbally.

The Lithuanian Embassy in Ireland supports this event, and the Lithuanian Ambassador to Ireland will be in attendance this year.

The summer camp is free of charge, as Žaneta explains: “We do not have sponsors nor any funding from outside. Everything we do is with the best intention to serve the community and keep the memory of our roots alive.”

This passion for their native land is also clear to see in the latest project which has been embarked upon. A rest area has been created on the Waterford Greenway by the Lithuanian community in Waterford as part of a wider project entitled ‘Signs of Lithuania in Public Places of Ireland’.

The aim is to create a link between Ireland and Lithuania in recognition of the many Lithuanians who are living here in Waterford and across all of Ireland. It’s also hoped the project can increase Lithuania’s visibility and create awareness about the cultural links between the two countries.

“As we are actively taking part in the Irish community and society, we would like to invite the Irish people to get to know us better and to introduce Lithuania to Irish people and invite them to visit our country of origin,” explains Žaneta who is one of the Lithuanians in Waterford enthusiastically involved in the project.

The ‘Lithuanian Way’ has been installed on the Waterford Greenway on the western side of the Kilmeaden train station near Fairbrook House and was unveiled on Saturday June 11th. The area, which has already proved popular, includes a rest area and informative signage. Volunteers have also planted a tree, flowers, and pollinator friendly plants. 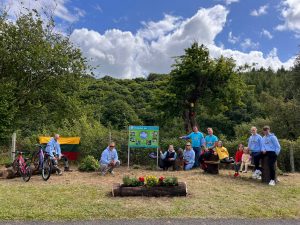 Members of the team who worked on the ‘Lithuanian Way’ located on the Waterford Greenway near Kilmeaden train station.

The project is organised by the Embassy of Lithuania which, Žaneta explains, means that the Waterford Greenway will receive significant attention and will be mentioned on various websites and social media pages.

“This is a free marketing tool for Waterford and will hopefully help to attract more tourists and visitors to the area,” she says.

Žaneta says many of the Lithuanians living in Waterford have already passionately promoted the Greenway to their compatriots in other parts of Ireland.  They hope that their promotional efforts will result in more people being encouraged to visit Waterford to enjoy the beauty of the Déise.

She paid tribute to all involved in the ‘Lithuanian Way’ project, saying: “This couldn’t have happened without the team.”

So, why should Irish tourists visit Lithuania? The signage erected on the ‘Lithuanian Way’ on the Waterford Greenway informs us about the country’s various attractions and provides a plethora of information on Lithuanian life and culture.

THE COAST: Lithuania has a short coastline, but its shores are all very different in character. Two of its three shores border the Curonian Lagoon which was created by the formation of the narrow Curonian Spit. The third is on the Baltic Sea. Each one offers a different adventure for visitors.

The Curonian Spit (Kuršių Nerija) is a long narrow sand spit stretching fifty kilometres on the Lithuanian side and sheltering part of its coast from the ravages of the Baltic Sea. This spit has been recognised as a World Heritage Site by UNESCO due to its unique landscape featuring small, lakeside settlements such as Nida and Juodkrantė.

“Walking on the shore of the Baltic Sea in search of little pieces of amber, also known as the gold of Lithuania, is one of the most romantic pastimes you can imagine.,” we are told. “You are most likely to find amber in algae left on the shore after a storm or among slivers or chips of shells. Appreciated for its colour and natural beauty, this gemstone has been valued and used in the making of jewellery for centuries.”

RURAL TOURISM: Standing on the dewy grass with bare feet, opening a window to the forest, letting in the fresh meadow smell, and feeling the goodness that man and nature have created – this is what rural tourism is all about. The rural homesteads located near rivers and lakes in the most beautiful parts of Lithuania offer their guests a different kind of leisure. If you are dreaming about resting in the nature, peace and fresh air, country tourism will fulfil all your dreams. 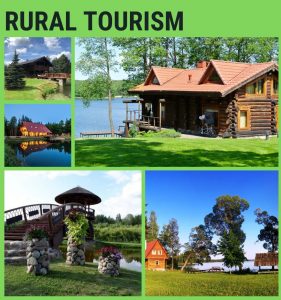 OUTDOOR ACTIVITIES: If visiting Lithuania, be sure to take a day out in the National Parks to fully appreciate Lithuanian beauty. Hear the whispering wind in the crowns of trees, inhale the tangy smell of pines, give your eyes and mind an opportunity to unwind and refuel. Enjoy the healing powers of the surrounding nature and experience a deluxe feeling of calmness. There are many activities and guided tours available across the country.

WELLNESS CENTRES: Combining a holiday with your healthcare makes great sense in Lithuania, with so much to see and explore while you are there. When you choose to visit Lithuania for your holiday, you will find top-notch facilities, infrastructure, and the charming nature of the residents. Lithuania has over 350 wellness and treatment spas.

Druskininkai – the unknown spa capital of Lithuania. The name of the city comes from the Lithuanian word ‘druska’, which means salt. Local resources are rich in minerals and their healing effects have been known for centuries.

Birštonas is best-known for its mineral waters, which are said to have healing powers. There are five huge spas, where people come to relax and have treatments.

TRADITIONAL FOOD: Traditional Lithuanian cuisine features rather rich and heavy dishes, suited for the cold northern climate. Typical ingredients include potatoes, rye seeds, beets and wild mushrooms – all items that grow throughout the country on farms and in forests. Many Lithuanian dishes are made from potatoes, meat and curd/cottage cheese.  Lithuanians also eat lots of berries, mushrooms and locally caught fish and game meat.  Soups are also very popular, just as are all kinds of dumplings.

Cepelinai is the national dish of Lithuania consisting of potato dumplings stuffed with spiced ground meat. The dumplings are traditionally quite large, served with bacon, pork rinds, and a sour cream and milk-based sauce after they have been boiled in plenty of salted water.

Šakotis is the famous tree cake, it is a vital part of traditional Lithuanian cuisine. Prepared with a thick batter which is repeatedly poured over a rotating horizontal spit, the cake is often slowly baked in the oven, or more traditionally, over an open fire.

With so much variety, it sounds like Lithuania should be our next destination of choice when planning a getaway. Now, thanks to this newly installed signage, local people will learn much more about Lithuania and its people.

The admirable efforts of Lithuanians in Waterford to create the ‘Lithuanian Way’ clearly displays their genuine appreciation of living here and also illustrates their dedication and commitment to both their adopted and native lands.

A group of Lithuanians pictured on the Waterford Greenway at Kilmacthomas.