A precious free day found me on the outskirts of Clonmel. I was on my way to the Marlfield Lake and it was several years since my last visit. The weather was dry and sunny and conditions were perfect for birdwatching. Parking was a bit tricky, and this was due to the many families who were out enjoying nature. After a few minutes I squeezed into a spot, grabbed my gear and started my walk.
The lake borders a road with a wide grassy verge. Birdwatching can have its hazards especially if you get too engrossed, and step back onto the road. A sharp beep of a horn reminded me that I did not have the lake all to myself. Across the water there is a woodland edge, and Marlfield village straddles the western side.
Mallards were unmistakable and there were a least a 100 birds on the lake. Little groups coalesced into larger ones, and they continuously moved and quacked. A few people were throwing in bread, and the competition between the gulls and ducks was fierce.
Mute swans are the largest birds on the lake. I was fascinated by their aggressive behaviour. One pair (I presume the resident birds) were chasing away another pair of swans or perhaps this year’s offspring. They focused one bird at a time and ducks were scattered as the battle raged across the water. The unfortunate swan was driven towards the side of the lake, and as he took flight he barely cleared the surrounding trees. He flew to the other end by was soon followed by his tormentors. 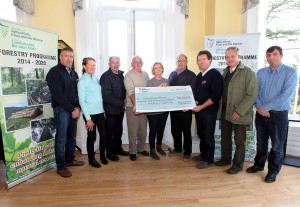 I turned my attention for a few minutes to the woodland edge behind the road. It is growing on a steep slope and the main species were Ash Sycamore and Beech. I could hear a Robin and Wren singing but the woodland was otherwise silent compared to the noise coming from the ducks. I found a very tall and impressive Ash tree and the biggest Hartstongue fern I have ever seen.
Black headed gulls swirled overhead but there were only around a dozen birds. They probably come here at peak people times in the hope of getting an easy meal. They were quite brave and approached quite close to the road. There are a favourite duck for hunting but thankfully there doesn’t seem to be any shooting going on here. Jackdaws fly overhead but their preferred feeding grounds would be in the gardens and streets of the nearby houses.
A Grey wagtail flies suddenly out of the low bushes and disappears up the road. The hedge cutter is busy a few hundred meters away and at least they keep the trees low so that people can enjoy views of the lake.
Many of the ducks are resident but Shovelers are winter visitors to our shores. They will leave in March but we do have a small breeding population based around the Shannon basin. Little Grebes swim very low in the water and if there are any waves they can be difficult to spot.
I walk beneath the oak tree and many of its acorns have been crushed beneath the wheels of cars. I pocket a few to sow in pots at home. A Chaffinch is calling in its branches and the leaves of winter helitrope are emerging from the ground.
A Moorhen breaks cover and them despite living near people they have yet to lose their shyness. Coots are larger and more aggressive but don’t seem to put in or out with us.
Holly, Hawthorn, Elderberry, Bramble and Rosehip all provide food for birds. A male Blackbird is searching through the leaf litter and he scolds me as he flies away. Ivy flowers are just finishing and the hard black fruits will appear in spring just in time for the breeding season.
A few farm yard liaisons have been going on and their off spring are bigger than a regular duck but their plumage is all mixed up. I wonder if their bigger size gives them an advantage over their smaller rival males. The last duck I see is A Gadwall and I am not familiar with this species and it is always nice to add something new to your list. They are winter migrants and a few reside at Marlfield each year.
As I return to the car I pass lots of families with young kids. One baby is being held tightly in the arms of his mother and hopefully they will continue his important education in the great outdoors.
Comments/Questions to albert.nolan@rocketmail.com or 089 4230502. Albert is also available to give walks/talks to schools, tidy towns, youth and community groups.