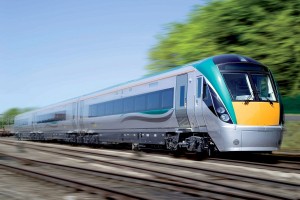 Services from Waterford to Rosslare have been lost. Might the line to Limerick be next to go?

RENEWED fears have been expressed over the future of Waterford’s rail connections.
At the November plenary meeting of Waterford City & County Council, Cllr Cha O’Neill (Ind) said he fears the Waterford to Limerick Junction line will become another Greenway and suggested that “Iarnród Éireann wants everyone to walk around Ireland”.
“If they close the Limerick line it means you can’t get to Galway or Cork by train from Waterford,” he said.
He also expressed fears over the future of Waterford’s station, noting that the main platform at Plunkett Station had been closed for a considerable time.
“They closed the Rosslare line and I can actually see the day when we might see the Waterford to Dublin line close,” he said. He called on Waterford City & County Council to write to the Minister for Transport asking him to re-invest in the main platform at Plunkett Station.
In response to Cllr O’Neill, Waterford City & County Council Chief Executive Michael Walsh referred Councillors to the 2030 Rail Network Strategy.He asked members to consult this document and said the council would return to the issue again.
In this report, which was undertaken by AECOM, it’s noted that the “Dublin to Waterford corridor continues to suffer from a number of barriers including the relatively high journey time in comparison to road, the isolation of the mainline rail station in Waterford from the City Centre, and the limited population catchment along the corridor.”
The report adds: “Journey times are hampered by the arrangement in Kilkenny, and by permanent speed restrictions through difficult terrain, and this all contributes to the route falling significantly short of its full potential demand.” The report recommends improved pedestrian/cycle connections into Waterford city centre from a relocated Railway Station.
No improvement in frequency is suggested, but a journey time of two hours on services is proposed which “can be achieved for a relatively modest investment in civil works”.
Meanwhile, it’s noted that the Waterford to Limerick Junction line “remains a relatively low quality route, with a limited number of services each day which do not respond to typical commuting peaks, and operate with low quality rolling stock.”
The report adds: “Reservations are not possible, and the route is generally excluded from ticket promotions. These factors all act to reduce demand on the corridor.”
Last week’s National Transport Authority/Irish Rail report, which identified the least performing rail routes, found that the Waterford-Limerick Junction route requires a subsidy of around €360 per passenger.
“Iarnród Éireann wants everyone to walk around Ireland.” – Cllr Cha O’Neill