Greening Waterford one tree at a time 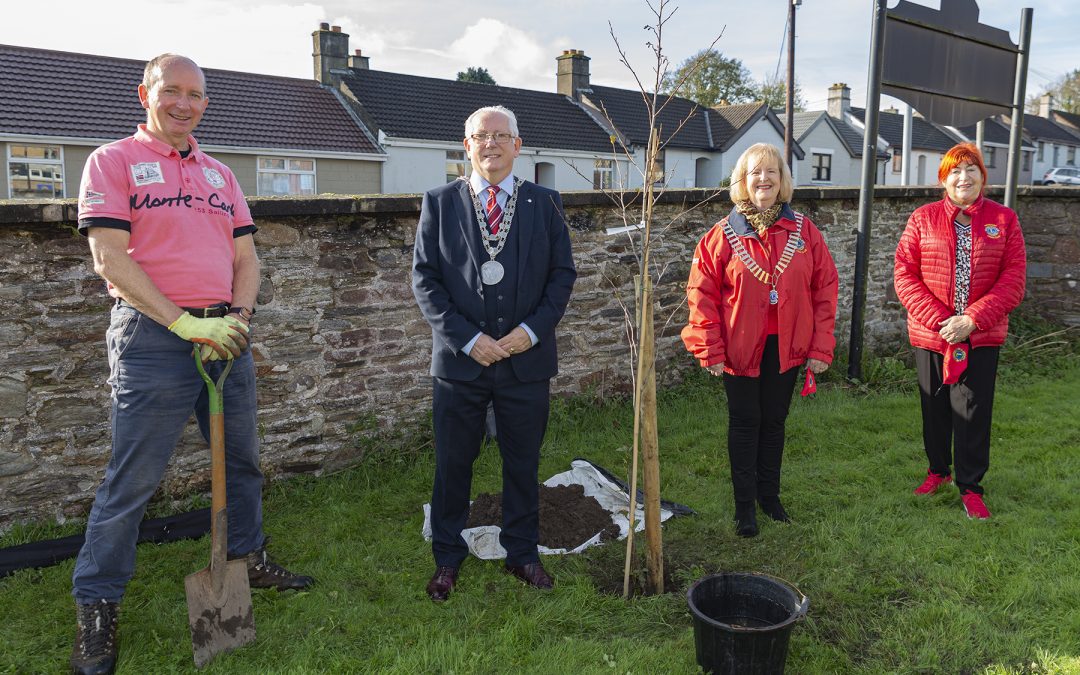 Waterford Lions Club was established in the mid-1960s, and its members have been helping and supporting the people of Waterford in many different ways ever since. The organisation has earned the respect of people throughout Waterford City and surrounding areas through its fundraising and the provision of various services.

The current President of Waterford Lions Club is Penny Nordell who explains that there are around 30 members, consisting of people from a variety of different backgrounds.

“Individually, people get involved in different projects within Waterford Lions Club,” she explains. “Sub committees look after our different projects and report to our monthly meetings. We’re all working away on various things in the background depending on the time of year.”

Brian Jacob joined Waterford Lions Club after retiring as Manager of Musgrave MarketPlace. He already knew some members through his work and was familiar with their admirable efforts.

“We were involved in the Christmas Hamper Appeal so I could see the work being done by Waterford Lions Club,” he explains. “But, working in the grocery business, I didn’t have time to join.”

Since becoming part of the team, Brian has been particularly impressed by the fact that members pay to become a member of Waterford Lions Club.

“Everything is voluntary and it’s all transparent. All of the administration costs come from our fees so 100 per cent of the money collected for a project goes to that project,” he explains.

Brian is also impressed by the broad skill set which exists amongst members.

“Some people might have lots of different contacts while others might have skills for administration work. You need different skills from different people.” 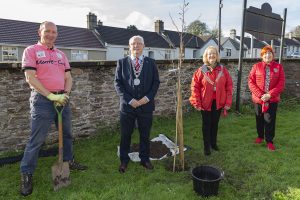 Successful projects which take place annually include the ‘East meets West’ Greenway cycle in aid of Waterford Hospice. Despite the challenges posed by Covid-19, this event still generated significant funds this year.

Another long-standing event, and one which is very close to the hearts of people in Waterford, is the annual Christmas Hamper Appeal which runs from 10th to 18th December this year. This is the flagship event of Waterford Lions Club and members aim to distribute 1,200 hampers or vouchers.

The appeal is undertaken each year in conjunction with SVP who identify those in Waterford who are most in need of some help each festive season. Brian and Penny explain that assistance is provided on a non-judgmental basis and caution against rushing to judgement in relation to the recipients.

“Not everything is as you see it on the surface,” says Brian. “You don’t see what’s going on behind closed doors.”

Logistically, the Christmas Hamper Appeal is a mammoth task and one which requires all shoulders to the wheel each year.

“The Christmas Appeal needs all of us on board,” explains Penny. “We try to keep working on other projects but these can be done in the background while the appeal is underway.”

Penny says there is a great sense of satisfaction at seeing a project such as the Christmas Hamper Appeal coming together.

“You start with a target and it can be daunting when you set out,” she says. “But everything works out and most times we actually exceed our target.”

The onset of the Covid-19 pandemic meant Waterford Lions Club had to reinvent. This was especially seen in the staging of the Lions Club Christmas Carol Concert. This hugely popular event celebrated its 30th anniversary two years ago and always generates a huge chunk of funding for the Christmas Hamper Appeal.  Last year, the format of the concert moved online which proved successful.

“But there isn’t really any substitute for the real thing,” adds Penny.

It’s hoped that the concert can be staged again this year, with the finer details currently being ironed out. Other fundraising activities which have been adapted to suit the ‘new normal’ include street collections. Last Christmas, a tap and go system complemented the traditional bucket collection and also proved successful.

Meanwhile, the Appeal Auction had already begun to develop online, but Covid provided the impetus to extend this further.

The 2,300 members of Lions Clubs on the island of Ireland are organised within District 133 of Lions Clubs International, an organisation of 46,000 clubs that operates in almost every country of the world.

In addition to the major events such as Waterford Lions Club’s Christmas Hamper Appeal, Penny explains there are many additional activities which Lions Club members are involved in.

For example, the Lions Clubs Carers Weekends are designed to help family carers who look after family members 24/7, providing them with badly need respite from their caring roles. Carers are made feel at ease throughout these weekends where they get to know each other and can discuss their situations in a relaxed environment. 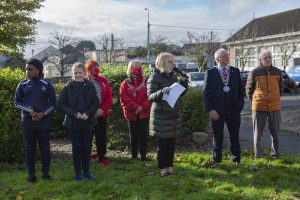 Meanwhile, the Annual Holiday Project sees over 600 guests, Lions Club members and helpers from throughout Ireland enjoying a stay in Trabolgan for a week. This has been running for around 40 years and is fully funded by Lions Club to provide a holiday for people who may not otherwise have such an opportunity. 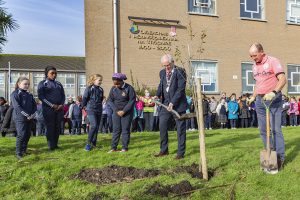 One of the latest Global Causes which Lions Clubs worldwide have embarked on relates to the one of the most pressing issues of our time – the Environment.

“Our District Governor and various officers ensure we know about the projects worldwide which Lions Clubs are taking on, be it Diabetes Awareness, Mental Health, or the Environment,” explains Penny. “We then decide if we have the resources to take on these projects.”

“With all the doom and gloom going surrounding global warming, we need to do something positive,” he says. “Tree planting is something tangibly positive to help in both the short-term and long-term.”

Brian was inspired to embark on the project after observing different areas of the city suitable for the planting of trees during his lockdown walks. He was keen to involve communities and especially schools as part of an educational programme and decided to engage with local businesses – more and more of which he believes are developing and nurturing a “green consciousness”.

Corporate donations are enabling the purchase of trees for a number of different locations around the city. Sponsors already signed up to support the initiative are Mac Trans Logistics, Advance Physio, Lisduggan Credit Union, Commercial Refrigeration and Smurfit Kappa.

Brian explains that there are also a few other ideas in the pipeline, especially around the idea of biodiversity.

One Tree at a Time 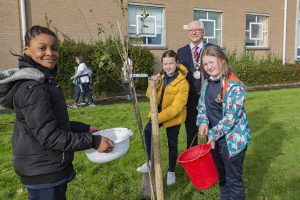 Under the tagline ‘Waterford Trees for Life – Greening Waterford one tree at a time’, the first tree planting ceremony as part of the new initiative took place at the Mercy Primary School on Wednesday November 10th.

Mayor of Waterford City & County Council Cllr Joe Kelly attended on the day and oversaw the planting of ten trees on the school grounds. This tree planting was sponsored by MacTrans and Advance Physio. 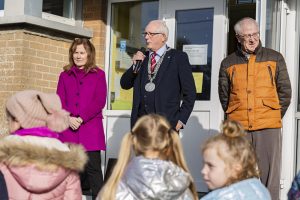 Brian explains that it’s about identifying the “right tree for the right place” and he is confident the trees will provide “aesthetic beauty” while also helping Waterford’s environmental future.  Penny believes the project will have a huge impact and create much needed environmental awareness.

“The motto of the Lions Club is ‘we serve’ – and you won’t get much better than this,” she says. “Here is a project which is coming from the ground up but also from the top down. I think it will gain a lot of traction.”

Although they are giving so much of their own free time and their energy and enthusiasm, both Penny and Brian say their involvement with Waterford Lions Club reaps dividends.

They point out that members are part of a warm and welcoming social circle and, although somewhat curtailed by the pandemic, they enjoy their meetings and gatherings in person and online.

“Along with getting the work done, there’s great banter,” says Penny.

Waterford Lions Club is constantly seeking new members, especially with different skills, and would love to hear from anyone interested in joining. 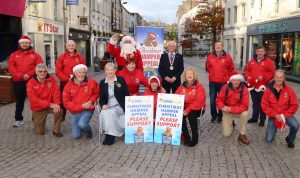 To find out more about Waterford Lions Club, visit their Facebook page. To get involved in the ‘Waterford Trees for Life’ initiative, contact Brian Jacob on 087-2631321