‘I’m a public representative, not a publicist’ 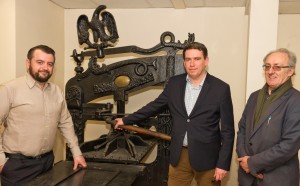 As for the Port of Waterford, John Deasy felt the Boundary Review and its ultimate outcome “isn’t an issue” in determining future positive outcomes at Belview. “If you start thinking in those insular terms, you’re dead. We have to think a bit broader than that. It’s irrelevant when it comes to economic development.”
As for the repeated assertion that Waterford would benefit from having a voice at senior cabinet level, John Deasy contended: “I would make the case that having a good CEO at Council level is more important. We’re incredibly lucky in Waterford to have Michael Walsh in that role. He’s a man with real ambition, he’s someone with imagination, he gets to the bottom line very quickly and understands very complex issues. Sometimes we don’t appreciate the kind of talent we have sometimes, so Waterford is very fortunate in that respect.”
John Deasy is hopeful of a good weekend ahead, but not without adding a disclaimer. “If you take the electorate for granted, you’re an eejit. What you’ve got to do is to put your best foot forward and everything, for me, is grounded in work. There’s a plasticity that’s emerged in our politics over the past 10 years which hasn’t been good for politics, but I would maintain that you have to retain the fundamentals and remain wedded to dealing with the non-sexy stuff. But I do believe that people recognise hard work and see through any other approach.
“I try to be effective, I don’t try and shove what I do in people’s faces, and that’s what I’ve based my political career on. And it’s served me well up to this point.”