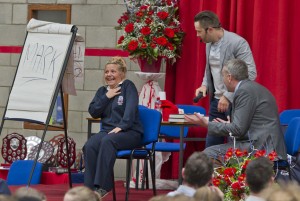 On Wednesday last, Ferrybank’s Abbey Community College held its Annual Awards Day, with the Board of Management and Staff recognising and applauding those students who had excelled academically, creatively and in the sporting sphere over the past year.
Guest of Honour for the day was Waterford’s master hypnotists and illusionist and mentalist Keith Barry.
Also presenting awards were Ms Eileen Curtis (Director of Schools, KCETB), Cllr Ger Frisby (Chairman of the Board of Management), Brother Denis Minehane (Board of Management), Ms Tonya Dowling (Chairperson of the Parents’ Association) and Cllr Fidelis Doherty (Board of Management).
Certificates were awarded to students across a wide range of disciplines: Best Leaving Certificate 2016 (Niamh Roche), Best Junior Certificate 2016 (Una Kinsella, Aoibheann Kavanagh and Jennifer Neoh), Student of the Year (Mairead Kennedy), TY Student of the Year (Erin Ryan), Sacred Heart of Mary Life Award (Jack Flynn), Academic Awards, Sports Prefects, Senior Prefects, Subject Awards, Academic Application, Contribution to School Life, Sports Awards, Music Awards, Homework Club, Justice Group, School Council, and Student Council.
Keith Barry, said how delighted he was to be at the Abbey event and congratulated all the recipients on their success.
He spoke of his own career path, encouraging students to pursue the interests they loved and enjoyed. A star who has graced some of the most prestigious stages and theatres in the world, Keith was happy to add Abbey Community College to his list of venues by replicating much of his celebrated Las Vegas show for the pupils, staff and guests. It was a stunning performance that had the audience enthralled, amazed and, most of all, highly entertained. Everybody agreed, he was brilliant!
Principal Detta Cahill, thanked Keith and all guests for attending and went on to acknowledge the wealth of talents and successes in the school. She also thanked the staff at Abbey Community College for their continued enthusiasm, commitment and hard work.
Just as the afternoon was drawing to an end, Ms Detta Cahill paid tribute to retiring school housekeeper, Ms Nellie Croke, for her 26 years of dedicated service to both Abbey Community College and Slieverue Vocational School.
To a thunderous standing ovation, Ms Cahill said Nellie would be sorely missed. (With thanks to Helen O’Connor)