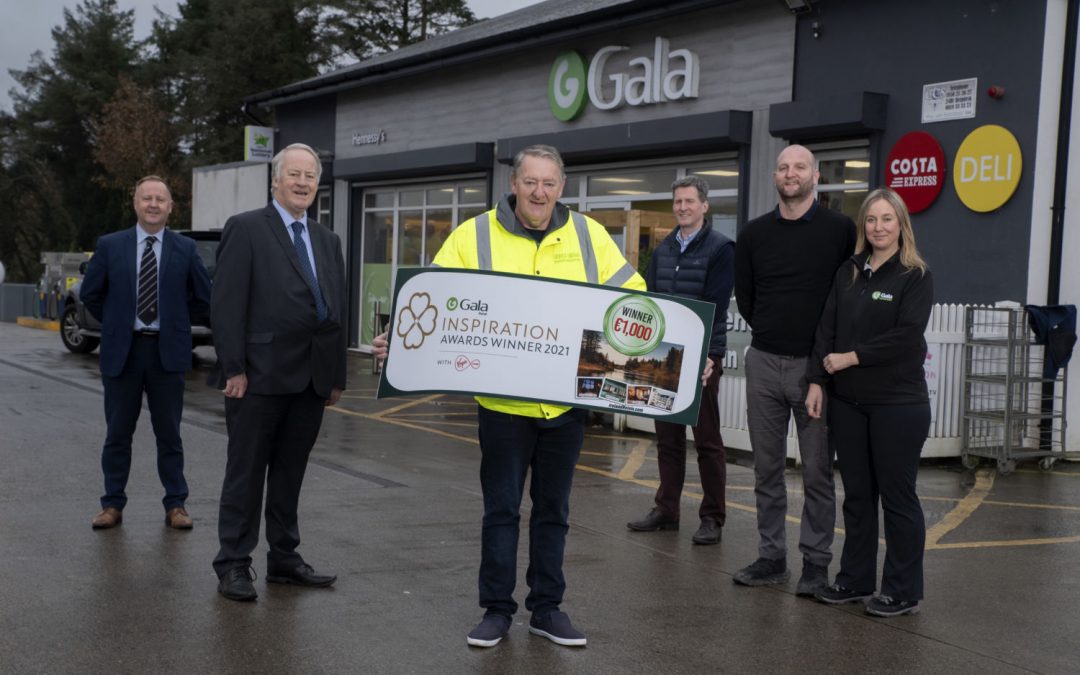 Established to shine a light on individuals who make Ireland a better place with their selfless acts and inspirational deeds, John stood out for volunteering as Chairperson with this impressive group. 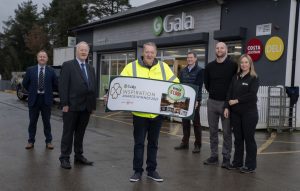 With Waterford having no 24-hour cardiac care, John took it upon himself to raise funds for defibrillators within the local community and the training of residents to certificate standard in their use.

John says the award came “out of the blue” and admits he first thought it was a scam call! He was delighted to learn he had been nominated by some people within the local community.

Inspirational people from across Ireland were nominated for the Gala Retail and Virgin Media Inspiration Awards, with 26 inspirational county heroes being named from the hundreds of entries received.

Commenting on the quality of the entries, Gary Desmond, CEO of Gala Retail said: “Now in their third year the Inspiration Awards pay homage to people from all across Ireland who play their part in creating a better country for us all. Operating in communities throughout Ireland, Gala Retailers have seen first-hand some of the great work that people have been doing and we are proud to have been able to recognise some of these inspirational individuals.”

He added: “We were overwhelmed by the level of nominations we received and John, along with the fellow inspirational heroes, are true examples of people who are making Ireland a better place for us all.”

This year marks the third year of the Gala Retail Inspiration Awards created as a way of celebrating the selfless acts and inspirational deeds of people in Ireland who are making the country a better place. Gala Retail has gifted €26,000 of prizes to the winners with the 26 county winners being awarded with €1,000 in hotel getaways across Ireland. 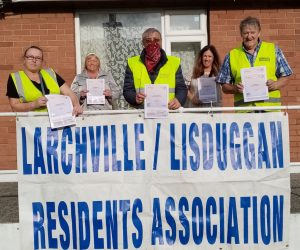 Some residents from the parish receiving their certificates for completing a prehospital emergency care course.

This is the latest accolade to be bestowed on the remarkable Larchville/Lisduggan Residents’ Association.

Meanwhile, at the 2021 Waterford PPN Community & Voluntary Awards, the group received a Certificate of Appreciation in recognition of their outstanding voluntary contribution throughout the Covid-19 pandemic. They were named runners up in the Residents Groups/Associations category, while Francis Court Age Action Group won in the Age Friendly Section.

The Larchville/Lisduggan Residents’ Association, comprised of a team of hardworking volunteers, was reinvigorated in recent years under the guidance of Secretary Veronica D’Ambra. Their overall objective is to make the area, of which they are all incredibly proud, an even better place for everyone to live in.

The core committee consists of John, Veronica and local Sinn Féin Councillor John Hearne who all possess a genuine passion for their local area. Many other volunteers come on board and get involved whenever the need arises.

“Work done is better than work talked about,” proclaims John Hearne. “If you have a good team, you’re never short of subs. And whenever something good happens, people want to be part of it.”

“We don’t use titles,” adds John Burns. “We’re a team on the same level. Everyone brings something to the table.”

Members of the rejuvenated group began engaging in regular clean-ups within the community and, building on this success, decided to branch out and engage in other activities such as planting. Thanks to funding from Waterford City & County Council, and the local Credit Union, they were able to buy pots and accessories. Waterford Area Partnership also provides the community with assistance for such projects.

A variety of projects have been enthusiastically embarked upon within the community, including at Francis Court where volunteers have painted, planted, power housed, and made a real difference to the upkeep of the area.

A group of volunteers involved in the ‘Plant the Parish’ initiative.

Larchville/Lisduggan Residents’ Association got involved in ‘Plant the Parish’, an initiative of Waterford City and Council, working with local residents associations, which encourages communities to get out and about and ‘green’ their shared spaces.

With bedding plants supplied by Waterford Council, the local residents’ associations rallied the community to plant and enhance their communal areas, by adding colour to the estates.

Highlighting the importance of community involvement in green initiatives, Michael Murphy, Estate and Tenancy Management Officer with Waterford Council, was delighted with the response.

He said: “It is heartening to see the local pride in the community and the effort made by these residents committees. The results were fantastic and will benefit the wider community. Greening our communities promotes improved air-quality and promotes better physical and mental health to all residents. It also has a knock-on effect in encouraging more residents to make an effort in planting and getting involved in other green initiatives.”

John Hearne said the initiative highlighted the “wonderful sense of belonging” in Larchville and Lisduggan.

“Young and old got involved in the planting and the tidy up and it’s great to see that, despite the challenges of the pandemic, community spirit is stronger than ever in Larchville and Lisduggan,” he said.

“I hope that this initiative will encourage more people to get involved and help us to make Larchville and Lisduggan even better places to live”.

In a clear example of a rising tide lifting all boats, more and more people became involved with the group after observing what was being achieved within the community.

The group has had lots of support from local businesses and from residents in neighbouring areas such as Lismore Park and Hillview who come along and help out.

Whenever projects are being embarked upon, and help is required, the Larcvhille/Lisduggan Residents’ Association issue a call for volunteers on Facebook.  Without fail, they always receive support.

John Hearne points out that during a recent winter planting event, around 25 volunteers turned up including nine “New Irish”.

“It goes to show that people coming from other countries want to be part of things and want to contribute to community life,” he says.

“I don’t think there’s anyone here that doesn’t know about us now!” adds John Burns.

“I don’t like to hear kids saying they have nothing to do,” says John Burns.

“We have everything you could think of,” adds John Hearne.

They point out that the Larchville/Lisduggan area is a vibrant community comprised of an eclectic mixture of groups and organisations, including a GAA club, boxing club, pigeon club, a drugs awareness group, the Scouts, as well as schools and the popular Waterford Shopping Centre.

Another invaluable local amenity is the Manor St John Youth Club which the group co-operates with thanks to the assistance of Maria Begaton.

Members of the group are also currently working with a new committee in Templar’s’ Hall, giving guidance especially in relation to grant applications and processes.

John Burns and John Hearne pictured in the community facility in Francis Court which is being renovated by Larchville/Lisduggan Residents’ Association.

Other exciting plans are in the pipeline. A future objective involves use of the small community hall in Francis Court. This had been leased to another agency for a number of years but hadn’t been in use recently.  Larchville/Lisduggan Residents’ Association will now manage the building for community purposes on a non-profit basis.

They envisage that this could act as a base for the group and could be used for a variety of activities. The group hasn’t started actively using the premises yet but have big plans.  Paint has already been obtained and work will also take place to develop a garden. However, the group needs some additional funding to make their dreams for the centre become a reality.

Their long-term vision involves the development of an all-encompassing community hub which would take a holistic approach to the needs of people in the local area.

Additionally, there are ambitious plans for the development of a green area at Central Avenue.  The area in question has often been the scene of unsightly bonfires and anti-social behaviour.

“We’d like to plant trees, install seating and create a garden including a memorial garden,” explains John Burns. This ties in with their overall ethos and current emphasis on mental health and the environment.

“Even the planting of a flower does so much for mental health,” says John. “And when people see their area is clean and cared for, it can really lift depression.”

Both Waterford City & County Council and Waterford Lions Club are on board to support this project. Feedback from the community is key to directing the group in relation to all their activities.

“When we first got going, we sent a letter around asking for feedback and the major issue highlighted was loneliness,” he says. “People were very lonely. We’re helping to change that now and we’re getting more and more people involved.”

“One of our plans is to establish a community support group,” explains John Burns. “You don’t need to be trained to see somebody who may need help, maybe someone hanging around the shopping centre with nothing to do. We want to integrate everyone and get everyone involved.”

Nurturing relationships with the Gardaí and other stakeholders is also key to their plans.

“For many years, particularly in working class estates, the State was viewed as a foreign body and wasn’t connected with the people themselves,” says John Hearne. “We want to use all the different stakeholders.”

John says getting Community Gardaí reinstated was a hugely important step as they are a “great asset” to the community.

The group’s members are grateful for all of the support they receive, especially from Sarah Jane Duggan (Waterford PPN) and all of the aforementioned groups and representatives.

2022 is set to be a momentous year as St. Paul’s Parish celebrates its Golden Jubilee and a series of special events is planned.

“It’s going to be a brilliant year for the parish,” says John Hearne.

There is a distinct identity within the local area, with people having noticeably strong attachments to ‘the parish’.  John points out that the clubs and organisations in the area often refer to the ‘the parish’, as do many locals when referring to their native area.

The St Paul’s Parish Frank Leahy 5 Mile Run/3 Mile Walk is an example of a parish-based event which enjoys huge success each year. This is an important annual fundraiser and this year’s event takes place on Sunday January 23rd, with runners starting at 1pm and walkers at 12.30pm. This is the 11th year of this popular community event which took place virtually last year.

“It’s a major financer for us,” says John Hearne, who says every cent raised stays within the parish.

Having achieved so much already, we are sure to hear much more for the Larchville/Lisduggan Residents’ Association throughout 2022.