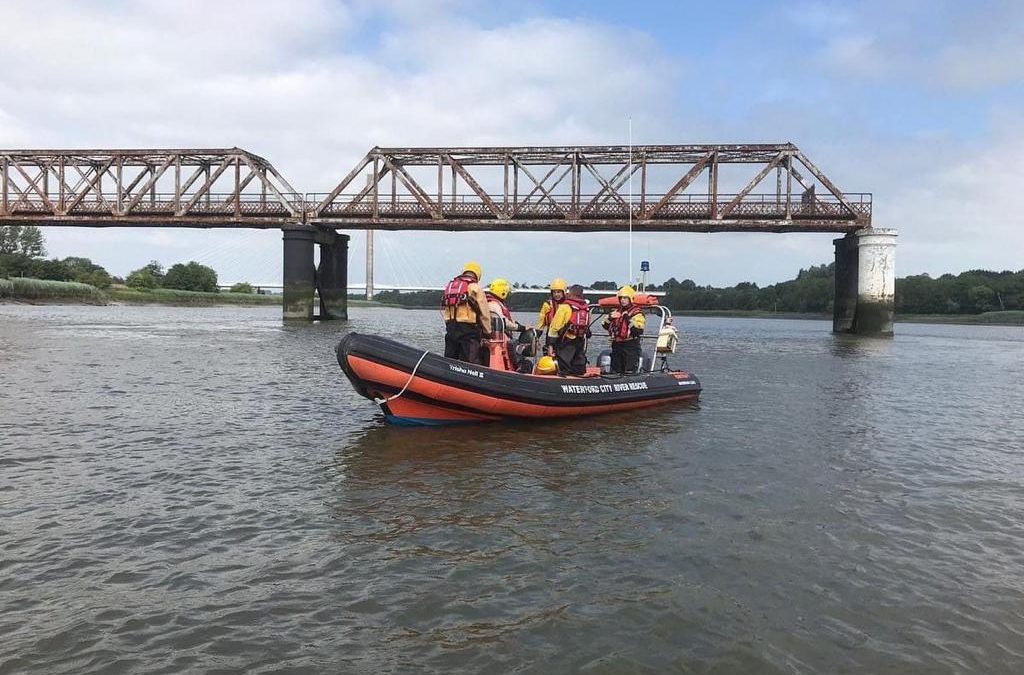 You would think with seven children ranging in age from 16 to 13 months old, Helena Wall from Cherrymount would have enough to keep her busy. But this powerhouse of a woman, has managed to find time in her crazy schedule to launch a massive fundraising campaign for suicide awareness in Waterford in which she hopes to raise thousands of euros for four local charities.

Suicide is a topic close to Helena’s heart as it is to many of those who have chosen to get involved in the various fundraising events being organised. “I started the fundraiser because last year my 16  year old son attended two funerals of boys he knew who had committed suicide. One was 18, the other 19.  Almost every week you hear of someone locally who has taken their own life. I’ve personally known 14 people who have taken their own lives. I just really wanted to do something to raise awareness and to get these organisations the funds they so badly need,” explains Helena. 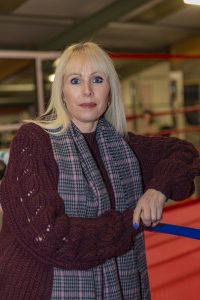 This isn’t Helena’s first foray into fundraising.  Last summer she raised €15,000 for the Laura Lynn Foundation, a children’s hospice who help children with life-limiting illnesses and their families.  “Afterwards I was thinking if I can raise that much on my own, if I had a helping hand I could probably double it. I have a great partner in crime, Emma Wall, who is helping me with all of this.”

The four charities Helena chose are Waterford City River Rescue, Waterford Marine Search and Rescue, The Haven Hub and Hugg. “All these charities do so much good work. I really wanted to get behind the Haven Hub because it was only set up at the end of November and they have absolutely nothing. €20,000 would set them up for five years.”

Amongst the events Helena has organised are a massive kick boxing event, co-ordinated by Pat Rockett, a karaoke night in the Mount Sion Centre on February 19th, Billy O’Sullivan’s kickboxing event on April 9th in The Haven Hotel, Dunmore East, Bingo in the Forum and Waterford Suicide Awareness Day on September 10th which will see all agencies connected to suicide prevention take part in a number of events on the day.

“Pat Rockett’s Kickboxing tournament takes place on March 12th. There are 50 contestants taking part and all of them have been affected by suicide in some way. The 400 tickets sold out in a couple of days. That will just show you how much people want to support this cause. Donations can be given to each individual charity. I’ve committed to working as hard as I can for 12 months to raise as much funding as I can and then I’m handing it over to someone else. I know the people of Waterford will get behind this because they know how much we need these charities.”

Waterford City River Rescue have been at the heart of most rescue operations along the river for many years now. A non-profit organisation that operates a voluntary Search and Rescue service along the River Suir from Mount Congreve to Cheekpoint. Their volunteers provide this essential service on a 24-hour basis, 365 days of the year.

During the pandemic, WCRR remained completely active and responsive to emergency call outs however Covid did inhibit their ability to fundraise so now more than ever they need the support of the local community.

Sinead Murphy, a teacher in the Mercy School, joined the WCRR 10 years ago and now holds the position of treasurer within the organisation. “My dad was a garda and when he retired he was asked to come in as Chairman of the River Rescue. Myself and my brother both joined at the time.  In that time I have seen the best of humanity and the absolute kindness of people but I’ve also seen a very dark side of life as has anyone else who has joined us,” says Sinead.

Many who join the River Rescue, says Sinead, have been touched in some way by suicide themselves. “They all have their own individual stories but that is usually that catalyst for them joining us in the first place. They want to do something to give back.” 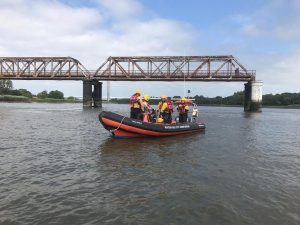 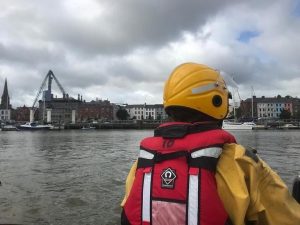 WCRR operates a voluntary Search and Rescue service along the River Suir.

Waterford City River Rescue was established in 2006 and is now one of the busiest stations in Ireland. “In 2021 we had in excess of 50 calls. Every single call has been initiated through someone calling 999 or 112. We are just one cog in a very big wheel and we work very closely with the ambulance service, the fire service and the gardai. We have a great working relationship with all of them and all help each other out.”

This year, several people were taken from the river alive, says Sinead. “That is the best outcome we could ask for, but we couldn’t do it with the help of the fire service. We also have had some fatalities, which is the worst outcome. We have had an extremely busy year. There was a couple of days that we had three call outs on one morning alone. And in another 24-hour period we retrieved two people from the water. We all work closely together to do our best for the casualties involved.”

Sinead said the one thing they would like to get across is how important it is for people to ring 999 or 112 and ask for the Coastguard. “We are affiliated with the Irish Coastguard and so when you make a call if someone is in trouble it is much quicker to ring the emergency number than if you ring a mobile because the Coastguard will immediately activate our pagers. Minutes save lives, literally. And don’t assume someone else is going to make the call,” she warns.

In financial terms, 2021 was a very difficult year for the river rescue. “We weren’t able to do our usual fundraising. We lost an engine of our lifeboat and fuel and insurance costs increased. Our other lifeboat was pulled out the other day and it’s going be extremely expensive to fix. Our crew are trained to the standard of the Coastguard at a cost of roughly €5,000 per person. Everything adds up.”

The river rescue are extremely grateful to Helena for running her fundraising initiative. “We cannot thank her enough. Everyone in the River Rescue is voluntary. No one takes a penny. They are extremely dedicated and we are a very close-knit group. We have been through thick and thin together and tend to lean on each other when things get tough. We are almost like family.”

“You have the power to say this is not how my story will end.” This is the moving quote that appears on the website of the Waterford Haven Hub, Waterford’s newest suicide prevention charity. The Haven Hub is an after-hours support centre based in the Ozanam Centre, Coffee House Lane, which opened its doors to the public at the beginning of December.

The Haven Hub offers peer to peer support with compassion and empathy in a safe space for people struggling to cope or at risk of suicide. In order to support people that are in distress after hours, the Haven Hub have suicide prevention trained volunteers at hand to help a person at risk come up with a safety plan to keep themselves safe until other, longer-term supports can be linked with.

The statistics regarding suicide are stark and harrowing:

On average one person will take their own life every day in Ireland.

Men account for three times the number of women who die by suicide.

Every suicide is a tragedy. The World Health Organisation has estimated that almost 800,000 die by suicide every year that is 1 person every 40 seconds.

Chairperson, Vivienne Burns from Glencara in Ballybeg was inspired by the Limerick branch of the hub. “I was friends with a girl in the Limerick branch and I told her I’d love to do something like it in Waterford. She came back to me 8 months ago and said they were ready to help me set up here in Waterford and we opened on December 3rd.”

The current premises is located on Coffee House Lane at the back of the Men’s Shed but they will be moving to a more appropriate location in a few weeks. “Where we are at present is lovely but it doesn’t afford us a huge amount of privacy so we will be moving.”

Explaining the concept of the Haven Hub, Vivienne explains that it is an after-hours support centre. “The only other help available for people who may feel suicidal in Waterford after hours is A & E. We are the only place that offers a face-to-face service.”

The phone lines are operated by volunteers every Friday night from 10pm to 2am but Vivienne hopes by the end of the year to be operating three nights a week. “It requires a lot of volunteers, 28 volunteers per night. I don’t want my volunteers doing more than 1 shift a month, because it is an exceptionally difficult job.”

Even though the Haven Hub is only open two months, it has already carried out 6 interventions so far. “A lot of people are not aware of the service yet but I wanted to be up and running before I publicised it.”

Vivienne said she was thrilled that Helena had included the charity in her fundraising efforts. “To get Helena and Pat Rockett on board to do fundraising is just amazing. So far we have had no government funding and we are surviving with the basics.  But we hope that will change in the next year.”

Pat Rockett’s name is synonymous with kickboxing and karate in Waterford. For many years he has run his highly successful martial arts academy at Ozier Park and is a huge believer of the mental health benefits of physical exercise. 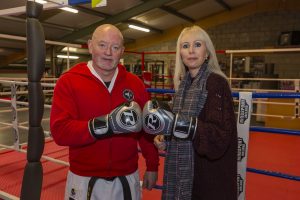 Last September he was asked would he run a charity event to raise funds for the fight against suicide. “The idea was the brainchild Helena Wall who was spurred on by the loss of some friends to suicide,” explains Pat.

“Helena is an avid fundraiser for suicide prevention and almost every week she has some form of event happening to help these amazing charities financially survive. Every year at our martial arts club, The Pat Rockett Martial Arts Academy, would run charity events mainly in aid of children’s cancer but this year we decided to get on board with Helena and try raise over €20,000 towards suicide prevention.”

Pat continued that all the charities are run by volunteers who spend all their free time trying to prevent suicide and help people that are going through the worse time of their lives. “With the assistance of my wife Jean, instructor Clodagh Cullen, some of our colleagues in the martial arts world and Helena’s contacts we enlisted 50 competitors that have agreed to come on board to help us raise the amount we set out through white Collar Kickboxing and Boxing.”

“The 50 amazing competitors, both male and female have all been touched one way or another  along the way with the heart break and devastation  that suicide brings and are already in training for the main event,” said Pat. The event will take place at the Crystal Leisure Centre Ballinaneeshagh Cork Road Waterford on Saturday March the 12th, Doors open at 5pm, show commences at 6pm.

“The tickets are limited and have already almost sold out but each competitor will have a sponsorship card that we would ask the public to donate to as it would really help these charities.”

Pat, along with his wife Jean and Business partner Declan Gahan own and operate the Crystal Leisure Centre which is being entirely donated free of charge for the event.  The Leisure Centre is now back open since the pandemic and is welcoming old customers and new as they try to rebuild their business to where it was pre pandemic.