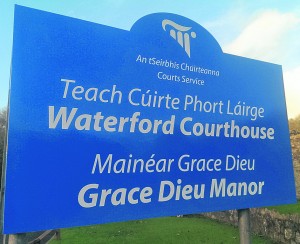 A 51-year-old Waterford man was sentenced in the Circuit Criminal Court, last week, to four years in prison with the final year suspended, for sexually assaulting his eight-year-old step daughter over a period of 13 months.

The man, who cannot be named for legal reasons, pleaded guilty to seven sample counts of sexual assault on the girl between October 2013 and November 2014. His name was entered on the Register of Sex Offenders.
Detective Garda Darren Colfer said the accused man was not the girl’s natural father but he was in a relationship with her mother.

They separated in 2001 after five years and he broke off contact with the family. The man was regarded by the girl as her father and at weekends she stayed with him and her brother, who was his natural son.

When the girl was eight and nine she had her own room and the accused would come in during the night and pull down her pyjamas and sexually assault her. The abuse occurred at weekends when she stayed with him over a period of 13 months. When she was 10 years old she told her mother and made a complaint to the Gardaí.

Shortly after this the man became aware of the complaint and realised the Gardaí would be looking for him and he left the jurisdiction. For one year he stayed in the UK and then went to Dubai. In April 2015 he returned to Ireland because his mother was terminally ill and he was arrested. During Garda interview he effectively accepted what had occurred.
While he was abroad the man sent a letter to the girl in 2012 when she was 18 years of age and he apologised to her in a general way. In 2014 he sent her two voice video recordings through Whats App. and spoke in a general way and apologised.
In a victim impact report the girl said her childhood was filled with sad and upsetting memories which she tried to escape and block out. It effected her life beyond measure and shattered her childhood. When the accused fled she felt guilty because she loved him and could not understand why he had abandoned the family.
The abuse was constantly on her mind and she felt alone and found it difficult to socialise. She was so embarrassed and ashamed and felt that everybody knew about it and was talking. Birthday and Christmas cards from him reminded her of the abuse and she felt her whole world had “crashed in”.
She was a very private person and she wished that she could open up with her pain to the people who loved her.
Barrister Elaine Morgan, defending, said her client had a chronic history of alcohol and a drug addiction. When arrested he co-operated fully and made a full confession. He admitted touching the victim in a “vey unhealthy way” and he could give no explanation for it. It was “warped” and he could not stop himself.
The man said he idolised the girl who was his “little princess” and he could not understand what he had done. There was no justification for it and he was 100 per cent wrong. He broke her trust and she was mentally hurt and he felt remorse and drank to forget and got scared and ran away. His life in Ireland was over and there were a lot of people who wanted to hurt him.
The accused added that he was truly sorry for any pain he caused and he could not take back the years that were lost.
Ms Morgan said a remarkable feature of reports before the court was the open way the man engaged with the professionals. He gained an insight into the serious wrong he had done his step daughter.
The court heard that the accused came from a “desperately dysfunctional” background of abuse and violence. Incest was a significant feature of his rearing and childhood. He had significant attachment issues. For 10 years he had been “clean and sober” and was a member of AA and was learning to live with his misdeeds.
In a letter to the victim he said he found it hard to tell her how truly sorry he was for taking away her childhood and causing her unnecessary pain. Fear and cowardice were responsible for the delay in facing up to his offending.
Psychologist Joe Hendry said he counselled the accused man over 20 one- hour sessions. Sex offenders could be deceitful and manipulative but in this case he had been extremely honest and remorseful and wanted to make amends.
He had a high degree of emotional insight into his offending. The accused man’s childhood was marked by psychological coldness and was bereft of emotion. He suffered sexual abuse and physical abuse.
Describing the accused man’s family background, he said his father had raped his sisters and openly sexually abused them.
Judge Eugene O’Kelly said the accused was in locus parents and appeared to have a loving relationship with the girl but this was marred by the sexual assault. To a significant degree he abused his position of trust and his step- daughter’s tender years were shattered to satisfy his sexual gratification.
The girl was a courageous young lady and he hoped she could put this behind her.
A sentence of eight years was warranted in this case but it should be reduced to four years due to the mitigating factors, with the final year suspended for three years.