City & County Mayor Adam Wyse has labelled Housing Minister and aspirant Taoiseach Simon Coveney’s ‘wait and see’ approach to the findings of the Boundary Review Committee as ‘disappointing’.
In a statement issued on Friday last, Mayor Wyse (FF) queried why Minister Coveney declared that it would take several months for him to consider the report’s recommendations. 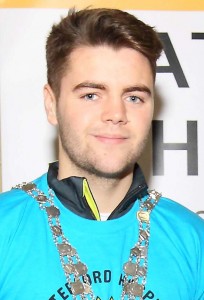 The Mayor’s colleague Councillor Eddie Mulligan, queried why Minister Coveney’s stance was so “at odds” with the position Health Minister Simon Harris had taken with the similarly independent Herity (UHW Cardiac Care) Report, “which Minister Harris threw his weight immediately behind”.
Ahead of Minister Coveney’s scheduled visit to the city on Monday next (see News 5), Mayor Wyse said that Waterford City & County Council “should be given the go ahead to begin developing and servicing the (Boundary Committee’s) area recommended for the extension, at a higher level than it currently can, due to the restrictions that the current boundary line creates”.
Calling on Minister Coveney to provide “real leadership”, he asked the Minister to implement the Review’s recommendations “with immediate effect prior to any leadership contest which may take place within his party”.
The Mayor added: “Anyone who has a goal of leading this country at the highest level as Taoiseach should have the interests of the entire country in mind when making a decision. This boundary extension can be a real game changer for Waterford and I worry about our possible expansion and growth into the future if we are not given the opportunity to invest in infrastructure in a strategic fashion.”
Speaking prior to the release of the Mayor’s statement, Cllr Mulligan told The Munster Express that “it was vital” that the boundary extension was legislated for, given the plans currently being assembled to develop the city’s North Quays.
“It is vital that we become the economic hub of the south east, and in that respect, the boundary extension is needed more than ever, with repeated economic indicators published both over the past year and historically making it plain to me that we have to become the primary economic hub of the south east, but to do that, we need the meaningful and sustained support of central government. And key to that is implementing the recommendations of this review, along with the necessary funding injection we’ll require to make the North Quay SDZ proposals truly meaningful and transformative.”
Re-iterating the Boundary Review Committee’s recommendation of a boundary extension into areas currently under the auspices of Kilkenny County Council, Mayor Wyse said their findings had earned the ‘full endorsement’ of all 32 Waterford Councillors.
Referring to the history of “separate executive teams, different political ideologies and motivations” with respect to the ‘Greater Ferrybank’ area, Mayor Wyse said the review’s recommendations provided a roadmap to sustained economic development in the ‘north city’.
“Not only will the commission’s recommendation allow our city to expand concentrically like any city should, it will allow Waterford Council to provide the fine level of service within the area as it does through other parts of Waterford City and County,” he concluded.
At an Emergency General Meeting of Kilkenny County Council held on Monday week last, amid cries of “not one blade of grass”, Councillors agreed to establish a steering committee which will vigorously oppose any amendment to the existing boundary.