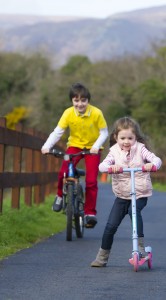 FUNDING of €1.6 million to complete the Waterford Greenway has been secured by Minister of State John Halligan.
The allocation will facilitate the completion of works, including the Bilberry extension, additional surfacing and accommodation works, Minister Halligan has confirmed.
The new amenity was officially opened on March 25th and has already attracted thousands of visitors and provided an economic boost to many local towns and villages such as Kilmacthomas.
The Greenway has also attracted significant media interest, both nationally and internationally.
“In the short few weeks since it officially opened, Waterford’s new Greenway has demonstrated its massive potential to the local tourism sector, not to mention captured the imagination of local walkers and cyclists,” Minister Halligan noted.
“Great credit must go to Waterford City and County Council manager Michael Walsh and his team for having the foresight and determination to develop this stunning piece of infrastructure, which is expected to attract up to 40,000 visitors a year and significantly boost the local economy. The Council has incurred significant costs in delivering the entire Greenway and I am delighted– with the support of my Independent Alliance colleague, Minister for Transport, Tourism and Sport, Shane Ross – to secure the necessary funds to help complete this jewel in Waterford’s tourism offering.”
The current 48km route stretches from Dungarvan to Bilberry, with this funding announcement paving the way for the eagerly awaited extension into the city’s quayside.
The €1.6 million allocation to Waterford Council was announced yesterday (Monday) during the launch of a public consultation process on the future development of Greenways.
Funding for local authorities in Meath and Kildare to progress the Galway to Dublin Greenway was also confirmed by Minister Ross, who said he had been inundated with requests from all around the country for funding for Greenways since he became a Minister.
“We have an opportunity, through our commitment in the Programme for Partnership Government, to build more greenways throughout Ireland and to provide more localities with the opportunity to benefit from such investment in the same way that communities in Waterford have,” he said.
“It is important that we target our investment in greenways that will deliver the most for their communities and for the country at large,” Minister Ross added.
“The outcome of this public consultation will inform the development of a new Greenways Strategy to ensure that future funding is spent on the right projects, in the right areas and at the right time. To make sure that we take the right approach in future, we need as many people as possible to give us their views during this public consultation process”.
Previously, the Department of Transport, Tourism and Sport awarded funding to Waterford City & County Council for two sections of the Waterford Greenway.
Under the National Cycle Network Funding Programme 2014-2016, €897,000 was awarded to deliver the Clonea to Durrow section, with a further €1.1 million awarded from the Government Stimulus Package 2014 to deliver the Kilmeaden to Bilberry section.
Funding of €552,000 was also awarded to the Council for the development of the original 4km track from Dungarvan town to Clonea as part of the Department’s funding for the Smarter Travel Demonstration Project in Dungarvan.
It’s understood the Council approached Minister Halligan earlier this year seeking help to secure funding to complete the works and this week’s announcement is the result of these representations.