Former Munster Express Deputy Editor and News Editor, John O’Connor, was honoured last week when he was given the Lifetime Achievement Award in the Hall of Fame by Local Ireland, the governing body of the regional newspapers of Ireland.
He was given the award for his contribution to the industry through his work for The Munster Express and as the longtime presenter of the RTE Radio 1 provincial newspaper review on Drivetime. This slot is featured on the show (presented by Mary Wilson) every Friday at around 4.45pm.
RTE’s Michael Lyster, who was MC at the event in Portlaoise, presented the award and recalled his own time at the Tuam Herald in County Galway.
Professor Michael Foley, son of the great Donal Foley of The Irish Times, was chairman of the judging panel.
He himself recalled how he used to read The Munster Express on his visits to Tramore in Waterford where his wife, Niamh O Sullivan, hailed from. It made for easier conversation with her Dad Luke!
Incidentally, Niamh’s brother, Kevin, was until recently editor of The Irish Times. Michael lectures in journalism in the Dublin Institute of Technology and one of his former students is our current News Editor, Dermot Keyes. Michael made the point that quality news was what made local newspapers vibrant and worth buying.
In accepting the award, John O’Connor said he was flabbergasted that he should be chosen and was immensely honoured and humbled.
Michael Lyster, jokingly noted how John took a break from The Munster Express for a while to become a professional musician before returning to the newspaper. Michael himself was actually born in Waterford and has been back a number of times.
In fact, John showed his music talent at the event by singing a self composed song about newspapers and hot metal printing. He received a rapturous applause and a standing ovation.
Frank Mulrennan incoming President of Local Ireland, the regional newspapers association, described Michael as the voice of sport on television and radio and said the country had been rooting for him during his bout of serious ill health.
Alan English of Iconic Newspapers and managing editor of the Limerick Leader Group, and formerly of The Sunday Times, noted how reporters were very happy and enthused to get their stories and papers mentioned on RTE and how it was good for morale and a quiet source of delight for journalists to be mentioned. John O’Connor, deserved immense credit for it, he said.
Frank Mulrennan backed up those words and praised John’s prose and song. He noted how the industry faced threats at present with on-line competition. There was some dysfunctionality but the industry was still strong and there was great collegiality among papers.
Michael Foley referred to the strength of journalism in papers. In appraising the industry awards for news, photos and advertising, he noted how issues like hospital closures, post offices, tragedies and crime were raised in the papers and that proper sources made these issues stand out.
Interestingly, despite the tough times, the quality of journalism remained strong in a time when fake news was a big issue in the world at large, regional newspapers came up with real news which was a theme at the industry event. 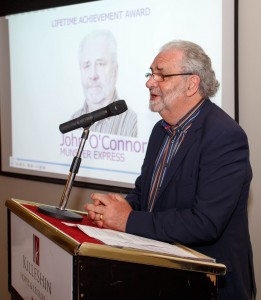 Flabbergasted: John O'Connor, who received the Local Ireland Lifetime Achievement Award for his work in regional newspapers in Portlaoise on Thursday last.