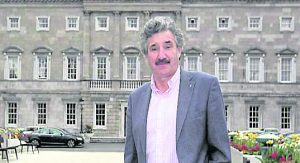 The soon to be An tUsual Sir John Halligan.

It has emerged that when the Coronavirus crisis is behind us, several prominent Waterford people will be among the first tranche of recipients for the country’s new Honours List.

As go to press on Monday night we are reliably informed that a joint announcement about the Honours List will be made on Wednesday by the Minister for Business, Enterprise and Innovation, Heather Humphreys, and the Minister for Culture, Heritage and the Gaeltacht, Josepha Madigan.

For years, people have been calling for a system of honouring outstanding people in society, similar to that in Britain, France and elsewhere. However, there were always objections to various aspects of previous plans but the way has now been cleared for an Irish Honours List to be created.

The Munster Express understands that people selected will first be asked if they are happy to be considered for the honour. If they decline, they will not be included and, in that way, the embarrassment of somebody refusing an honour will be avoided.

Recipients will be referred to by the multi-gender An tUasal followed, as in Britain, by Sir or Lady.  All conferrings will be made twice yearly by the President at Áras an Uachataráin. Sources close to the government told The Munster Express it would be announced on Wednesday that the first conferring ceremony had been scheduled for the Áras in August.

Strongly rumoured to be among the first group of new Sirs and Ladies are Waterford playwright, Jim Nolan; WIT President, Professor Willie Donnelly, and businessman and developer Noel Frisby.

From the world of politics, retiring Minister of State, John Halligan, will be honoured as will WLRfm’s Nichola Beresford for her contribution to broadcasting and business.

For his lifetime’s dedication to music and to his local community, another popular inclusion will be Tramore’s Thomas ‘Rocky’ Mills. President Michael D is a big Elvis fan so he’ll certainly enjoy Rocky’s company when the time comes.

More names will emerge in the weeks ahead and it is expected that heroes from the ranks of the medical and nursing professions currently battling Coronavirus virus will be included.