There was huge excitement in Piltown on Saturday August 21st when finally nearly three years after a group of volunteers came together to plan creating a park and playground for the community they saw their vision completed. The Pil River Park and playground opened its gates at 12 noon to the countdown of some of the committee and local children under a beautiful balloon arch provided by Balloon Lane, a new local business in neighbouring Mooncoin.

The playground was a hive of activity until late Saturday evening and continues to be very busy every day since opening.

It’s absolutely fantastic to see so many people enjoying this beautiful facility, which was badly needed in the community. Great to see parents, grandparents and friends all using it, as a safe outdoor meeting point whilst children enjoy and explore the new play area. 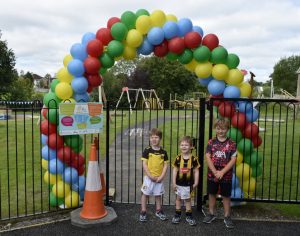 Tadgh and Cathal Kinsella and Harry Connolly at the opening of the Pil River park. Photo: Joe Cashin.

Thanks to the amazing volunteer committee, who have worked tirelessly on this project. Thanks also for the support of the community, organisations, individuals, Kilkenny County Council and Leader. Special mention of the late Johnny O’Shea – without Johnny’s vision this would not have been possible.

Hopefully, in the near future, we will have an official opening, depending on government guidelines. For now enjoy the new park and playground, which will be a most popular meeting point for everyone.