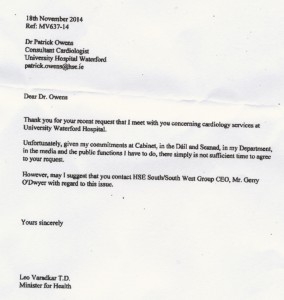 CORRESPONDENCE between a University Hospital Waterford (UHW) consultant and Ireland’s new Taoiseach appears to show a shocking disregard for the lives of people in Waterford and the South-East.
Documents obtained through a Freedom of Information request show that Leo Varadkar has prioritised his media appearances and public functions over concerns related to cardiac services at UHW.
In November 2014, Dr Patrick Owens, Consultant Cardiologist at UHW, emailed then Minister for Health Leo Varadkar to highlight his concerns.
A response issued by Mr Varadkar on November 18th, 2014 thanked Dr Owens for his request to meet with him, but stated: “Unfortunately, given my commitments at Cabinet, Dáil and Seanad, in my Department, in the media and the public functions I have to do, there simply is not sufficient time to agree to your request.”
In 2015, a further email sent by Dr Patrick Owens, and accompanied by a briefing note, further highlighted concerns to Mr Varadkar.
The note included information stating that 18 patients had been identified as having had an ACS (i.e. heart attack or unstable angina) admission whilst on the waiting list for routine angiography at UHW between 2013 and 2015.
Receipt of the briefing note was acknowledged by a Parliamentary Assistant to Minister Varadkar, however, no further action appears to have been taken.
UHW campaigner Kieran Hartley, who ran as a Fianna Fáil candidate in the 2014 European Parliament elections and who obtained the correspondence through Freedom of Information, said Leo Varadkar’s attitude shows a “shocking disregard for people in Waterford and the South-East”.
“The Minister basically said he was too busy to meet a UHW consultant to discuss the lives of people in Waterford and the South-East,” he said.
Mr Hartley said the issue was turned into a “political football” in order to bring about the formation of government last year.
“Leo Varadkar knew the severity of this issue in 2014 and 2015. He then turned it into a political circus with John Halligan in 2016,” he said.
“The clinicians have said there is a clinical need for this so therefore it should be delivered on that basis alone, not on a political decision putting money before people’s lives. In a life and death situation, politics has to be taken out of decisions like this. It must be down to clinical need.”
He continued: “The Minister for Health said he was too busy to meet to discuss people’s lives in the South-East. And now he is Taoiseach, how will his attitude change? It’s my belief that people have died needlessly because of a lack of political will to deliver this. Politicians are not qualified to make a decision on life or death like this, therefore politicians should not be involved. We need to take the politics out of these decisions.”
Mr Hartley also claims that he has been informed that Minister John Halligan was present at a meeting at which the controversial “unredacted” paragraph of a briefing note on the findings of Dr Niall Herity was presented.
The unredacted version of the briefing document provided by the department to the review says the provision of a 24/7 cardiac service at UHW along with the provision of a second catheterisation lab for heart attack patients was not a top priority.
Mr Hartley claims that John Halligan was present in the room when that unredacted document was presented in June, after the government was formed.
“The unredacted statement was definitely present in a report at a meeting prior to John Halligan saying he had never seen it and that he had only received it in an email,” he said.
“The document was placed on a table in a room when the hospital was being discussed. I don’t know if John Halligan read all of the report, but I know that if I’m in a meeting and hand outs are put on a table, I take them away and read them.”
He added: “Minister Halligan has had three golden opportunities to deliver a second cath lab for the 500,000 people of the South-East but has failed to deliver on his promise. Instead, he chose to support a Fine Gael government instead of the people he was elected to represent.”
However, Minister Halligan says he didn’t receive the unredacted version of the briefing document until October 7th. He says this was the first time that he had seen the document in its entirety.
Mr Hartley last year lodged a Garda complaint in relation to the ‘risk register’ alteration which was made outside Waterford and without the knowledge of UHW clinicians.
An investigation into this matter is still ongoing.
Last week, the Head of the HSE said a mobile cath lab should be ready for use at UHW within three months, and will be in place for a brief period.
Tony O’Brien said that the HSE has been trying to recruit additional staffing to allow the existing lab open for longer.
Commenting on Minister Varadkar’s comments to Dr Patrick Owens as revealed in the correspondence obtained by Kieran Hartley, Willie Doyle of the 24/7 Cardiac Care for Waterford and the South-East campaign group said: “It certainly shows the contempt that the politicians have for the lives of the people here. The fact that they can allow families to go through the pain and hurt of a devastating life changing situation just by drawing a line across the South East Region is just beyond belief.
“How can politicians and HSE management live with themselves knowing that they are deciding whether people live or die by not opening the Cardiac Unit on a full time basis? A person’s life is decided by a short trip down a corridor when the Cardiac Unit at UHW is open or a long road trip by ambulance to either Cork or Dublin.”