Newspapers are more relevant than ever 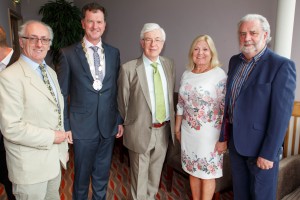 The newspaper industry could still have a good future but needed more Government help, stated John O’Connor in his acceptance speech after winning the Hall of Fame Award for Lifetime Achievement in the Provincial Newspaper industry.
Speaking in Portlaoise last week, he said people had great trust in the press at a time when social media was getting stronger.
As a reviewer of the regional press on RTE’s Radio 1 for over 30 years, he said papers across the country produced great stories week after week. The papers were great value buys at around €2 a copy.
Marketing to the coming generation could be a challenge but it would become more fashionable to read newspapers and be up with the news. Papers were very important as the presidential election in the United States showed how fake social news from unknown sources could swing a result.
Ireland was smaller in size, said John, which meant that we could be safer from fake news but not immune from it.
Regional newspapers, he said, could balance content and while local radio was excellent, newspapers by their nature had more space and volume and could cover events in greater depth. Newspapers were there to protect society and preserve democracy and stability in its current form.
To preserve quality they needed help in revenue terms whether by extra State advertising support or other methods of assisting by lowering VAT.
The Government could do more and should contemplate a scenario where there were no local newspapers (this is now happening in the UK but not yet in Ireland).
The question of who would fill the void was wide open and opinion in communities could be shaped by political activists from anywhere in the world. For the sake of democracy, government ministers should act now before it was too late.
He spoke how the late Donal Foley of The Irish Times inspired him as a young reporter. A fellow Ferrybank man, Foley became News Editor in The Irish Times. He was a serious journalist but also had a streak of mischief and his Man Bites Dog column was essential reading on a Saturday.
John went on to talk about starting with The Munster Express and working for the late JJ Walsh and going from reporter to Deputy Editor. He got on well with JJ Walsh who was editor for close on 50 years and was glad to see the family tradition continue with Kieran Walsh as editor.
He was grateful for what The Munster Express had done for him over the years and he paid tribute to the many excellent reporters and printers in The Munster Express down through the years from whom he had learned so much.
He then went on to speak about his Radio 1 Drivetime Friday slot reviewing the provincial papers and how there were many great reporters and editors across the country, some of whom were present for the awards dinner in Portlaoise.
He mentioned how he had worked with three main presenters on the programme, Myles Dungan, Rachel English and now Mary Wilson.
They all loved regional journalism and their enthusiasm bounced back to the listener. Series producer, Tom Donnelly, was also an enthusiastic supporter of the regional press, he stated. John said he tried to be fair with papers and spread the net widely across more than 50 titles.
He was full of admiration for the prize winning journalists at the Awards function and praised their work.
He also paid tribute to the three judges present, Professor Michael Foley of DIT, former Irish Times photographer Tom Lawlor and David Burke outgoing President of Local Ireland.
Newspapers, he said, were still great value and worth supporting.
He believed it would once again become very trendy to be seen with a local newspaper under your arm and making a statement of your support for your local paper.