ELECTION signage of a different kind has been erected in Passage East. While crime, health, the economy and homelessness are dominating the general election debate nationally, “marauding” goats are causing concern for voters in the Passage East area.
A local family, who say they have been pushed “past the point of despair”, have erected signage on their property calling on canvassing politicians to address the issue as a matter of urgency.
Speaking to The Munster Express, Lillian Lynch explained the decision to erect prominent signage which reads ‘Politicians take heed, if you want our votes, control the goats’.
Ms Lynch claims that a herd of goats are intruding onto private properties in the area.
She says her family has had to “spend a fortune” in order to protect their property because of the goats which she says are “running wild”, “marauding in our garden” and using the area as a “stomping ground”.
“They defecate all over the place and have ruined our garden,” she said. “We’ve had to replant and re-fence. The place is now like Fort Knox.”
Ms Lynch claims that the goats are causing problems in other neighbouring areas as well.
“We are all driven demented. They’re running riot,” she said.
The family have written to the Department of Agriculture and have made repeated requests for the issue to be addressed.
“We’ve been told that the Department will look into it, but they have refused to deal with our concerns,” said Ms Lynch.
While the family did receive a reply, she said this was “not good enough”.
They have also written to Minister for Agriculture Simon Coveney. 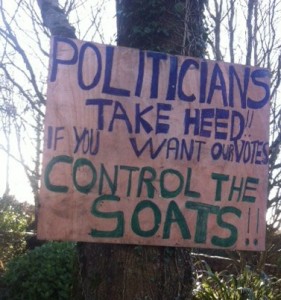 The general election signage erected by the Lynch family in Passage East, outlining their concerns.

While a wild herd is said to have grazed in the Passage East for more than 200 years, Ms Lynch said the goats in question were introduced to the area five years ago but the number has multiplied significantly.
“The goats were introduced to the area in 2011 and they were originally part of the Bilberry Goat Herd,” she explained.
“The Department of Agriculture assigned a herd number to the goats. According to the Department’s own stipulations, a herd of goats needs to be kept in a defined holding and entry points to holdings or lands are to be permanently blocked.
“These animals just run amok. They invade private properties and private lands at will. They damage, destroy, devour and defecate wherever they roam and the majority of residents in the Knockroe/Parkswood area are affected by these marauding creatures.”
She added: “The Department of Agriculture have stonewalled us on the issue, despite repeated appeals to them on our part. We have been pushed past the point of despair.”