Pieta's ascent of Kilimanjaro raises over €170,000 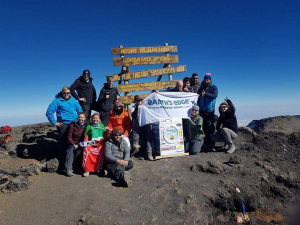 Enda O'Doherty pictured at Barafu Camp with Ireland's most famous washing machine, the day before the Pieta Challenge team reached the summit of Mount Kilimanjaro. Also pictured are the group of Pieta Challengers, including his wife Maeve, who magnificently made the peak.

A 35-strong group of hikers, predominantly from Waterford, who endured a 12-day trek to the summit of Mount Kilimanjaro, has so far raised in excess of €170,000 for Pieta House. And while the group’s talisman, De La Salle College teacher Enda O’Doherty, had to halt his ascent on medical advice (as was the case for several others), the washing machine he and members of the group hoisted towards Africa’s highest point, did make it all the way to the top.
“We literally shared the load,” Enda told The Munster Express.
“And that underlined the message of Pieta House: of not being afraid to face a difficulty, to reach out and to share the load. I saw the best of humanity on that mountain, in the 35 people who raised such a fantastic amount of money for such a great cause, and in the 100 porters who go up and down the mountain with groups like ours from one end of the year to the other. The warmth of that group has formed a lifelong bond, and to think it all started off as a madcap idea in Geoff’s!”
Enda added: “But we’re all home now, all in one piece, thankfully, and we’re all the more grateful for that given the sad news about poor Majella (Duffy, aged 35), who was climbing the mountain in memory of her late father with another group when tragedy struck. It’s a sad reminder of how dangerous the trek can be, and all of us, to varying degrees, suffered over the course of the trek, and it really focused the mind. But we’re all home. We’re the lucky ones.
“We vomited a lot, we all experienced diarrhoea, and by the time I had to stop, I was only managing four steps a minute. A geriatric would have had greater mobility than what I had by the time I was red flagged. Due to the altitude sickness more than anything, I had several hours where I couldn’t remember my own name, my wife Maeve’s name, and it’ll tell you the way the mind works, as I eventually came to, while having oxygen administered, the first two names that sprung to mind were the dogs back home in Waterford. But to be home now, and to have everyone back safely, having raised so much money, is both a joy and a relief.”
He continued: “The washing machine making the summit was of much greater significance than me making it. I’d love to have made it up there, of course I would, and the spirit was willing. But the flesh was weak and I had to listen to the medical advice I received and pay attention to my body, which was pretty broken up by the time I stopped moving. Walking from Belfast to Waterford with the washing machine was like a day in a crèche compared to this, honestly. It really was the most extraordinary experience: mentally, physically and emotionally, but in the first few days after I got home, I could feel my feet getting itchy already. And while I don’t think attempting something at altitude is likely again, there’ll definitely be another challenge – of course there will!”
Enda O’Doherty described the experience as “hard a thing as I could have imagined – it was off the scale hard: the best of times and the worst of times, as someone else once famously put it…
“The first day alone was the equivalent of climbing four Carrantuohills with the washing machine on my back, in 30 degree heat and 90 per cent humidity, finishing in the dark, in the rain, in the rainforest…but I didn’t get to the summit – I was two hours shy of it – and naturally that’s a disappointment for me personally. But I couldn’t take another step, so I myself had to share the load. I saw people at their absolute physical, mental and emotional edge and they kept going. Talk about true heroism. They just got brighter and brighter – and they were incredible. And they did it to save lives in Ireland. I couldn’t be more proud.”