Pil River Park and Playground is pride of Piltown 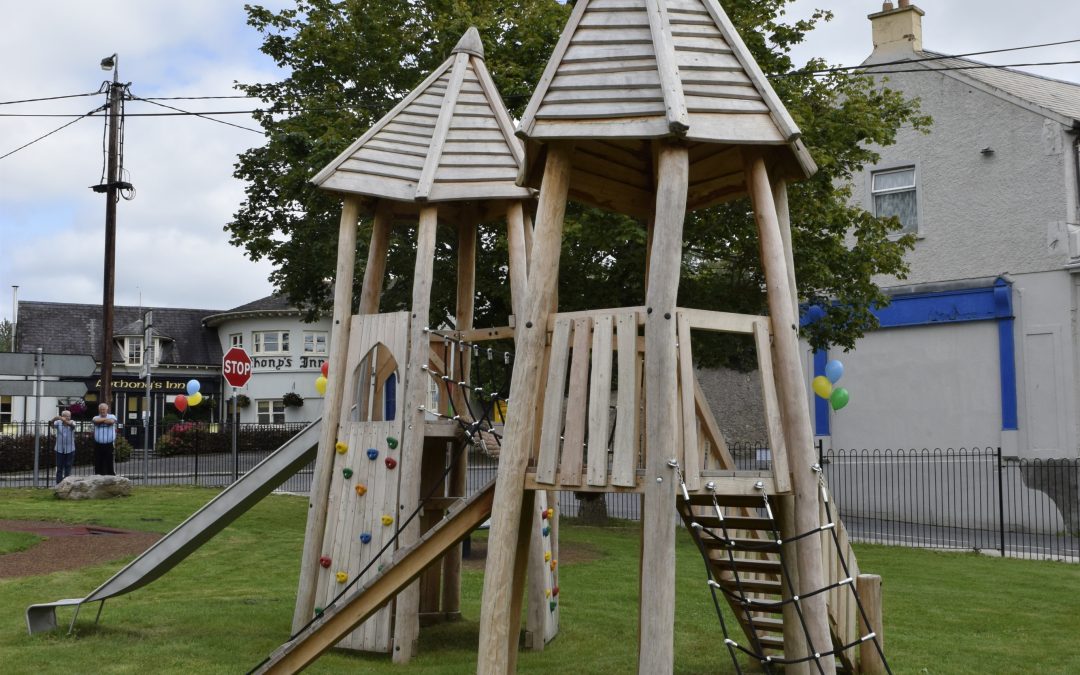 Friday October 29th was a momentous day in Piltown, South Kilkenny as a major new amenity was officially opened.

The Pil River Park and Playground is the latest addition to this picturesque community and has already proved hugely popular. The park has been tastefully designed in keeping with the beautiful natural surroundings, including the Pil River which meanders past the site. The wonderful new playground includes high-quality equipment, guaranteeing hours of fun, and incorporates a sensory garden which has many benefits for children with autism and can also help with dementia and the reduction of anxiety.

Local philanthropist, the late John O’Shea, donated the prominent site to the community before his death in October 2018. He also contributed a significant financial donation so that this ambitious project could proceed.

The journey to creating this wonderful new amenity began three years ago when a group of enthusiastic locals came together with a shared vision.

Despite the immense challenges posed by the Covid-19 pandemic since March 2020, the enthusiasm of the Pil River Park committee never diminished and their commitment to making their dream a reality never wavered.

Their resilience shone through as they persevered through Zoom meetings, various calls, and worked diligently to finally secure planning permission in November 2020 for their much-needed park and playground for the community. 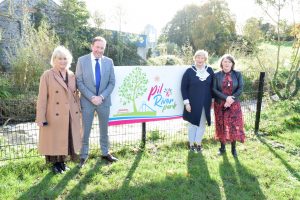 Unfortunately, when work was due to commence on site in January 2021, Ireland’s third Covid-19 lockdown was implemented. However, despite all construction work being halted, the committee members once again persevered to ensure that it would be ‘all systems go’ once restrictions were lifted. Finally, guided by government and HSE recommendations, works began in April.

“Our playground provider All Play arrived on site on a sunny Monday morning on April 26th and worked so hard in transforming this beautiful site while also keeping within the aesthetics of the area,” explains PRO of the Pil River Park committee Fiona Quilty.

Support and buy-in from the local community proved crucial. Fiona says such impressive progress was only made possible thanks to the hard work of the volunteer committee, the expertise and advice from the various departments in Kilkenny County Council and also financial support from both Kilkenny LEADER and Kilkenny Council.

She adds that the late John O’Shea and O’Shea farms were of course instrumental in ensuring the project became a reality. “Without them this would never have happened,” says Fiona.

On a beautiful autumn day, the ribbon cutting at the entrance to the new amenity was performed by two Piltown and Kilkenny senior camogie players, Aoife Norris and Aoife Doyle, along with Lucy Cahill of Templeorum National School who was the overall winner of the committee’s anti-litter poster competition.

Children raced into the Pil River Park and Playground with joy etched on their faces as they eagerly got to grips with the impressive array of new equipment.

Cathaoirleach of Kilkenny County Council Cllr Fidelis Doherty (FG) praised the committee and noted that John O’Shea must surely be smiling down on everyone.

“The vision was to provide and maintain an integrated community parkland, incorporating facilities for play and recreation for children and young people in the area of all abilities,” she said. “As we stand here today, I can see that this objective has been successfully achieved. You can take pride in this fabulous new facility.”

She complimented the community on its level of engagement with Kilkenny Council.

“Engagement from the local community makes our job so much easier,” she said. 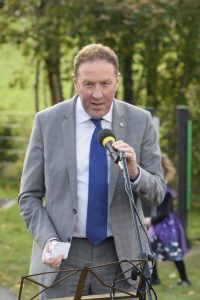 Cllr Doherty pointed out some of the interesting features of the site such as the planting of native trees and pollinator friendly plants. She noted that the past 18 months had been very difficult for everyone, including children, and remarked on seeing their faces “light up” as they entered the new park and playground.

“Playgrounds and recreational facilities make all our communities brighter,” she said.

Cllr Doherty mentioned some impressive projects which have been completed in Piltown within recent years – including the transformation of the old creamery building into Piltown Enterprise Centre which she described as “a model for the county”.

“We, as elected members, will continue to work on behalf of people in the Piltown area,” she pledged.

Meanwhile, Declan Rice, CEO of Kilkenny LEADER Partnership, also thanked all involved in the committee and agreed that the amenity which has been created would serve as a wonderful memorial to John O’Shea.

He outlined how LEADER can provide money and support, but projects only come to fruition when each respective community makes a concerted effort towards achieving its goal. He praised the Piltown community for proceeding with the project and persevering throughout the Covid-19 pandemic.

Fr Paschal Moore performed a special blessing and wished everyone many hours of enjoyment in the new park and playground. He prayed for the safety of all who will use the amenity and expressed his hope that they will be filled with life, and that all those who came up with the idea and worked to create the amenity will be filled with joy. He also prayed that the playground will be respected by all in the local community. 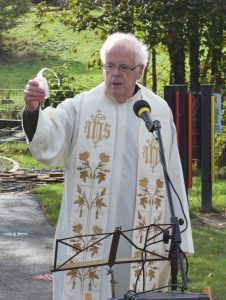 Ruth Kennington, representing Rev Victoria Lynch, praised all who had the vision to embark on the project and all who worked to make it a reality: “It serves not only as a wonderful resource where children and families can gather to share fun, exercise and friendship, but also as a symbol of the value which the community places on its children and their well-being.”

On behalf of the Pil River Park committee, Sinead Connolly detailed the origins of the project and thanked all who came on board to assist.

“It’s hard to believe it’s almost three years since a group came together in the community centre here in Piltown to make one of John O’Shea’s dreams for his village come through,” she said. “Looking around us today we can agree that he found the perfect site on the banks of Pil River.”

She said taking on the task had been “no mean feat” and explained that various sub committees worked to tackle specific aspects of the mammoth project.

“The first step was consultation with schools, crèches and community groups about the equipment children would like to see in playground,” she said. “Since the playground opened in August, it has been packed with children playing and having fun, so we obviously chose our equipment very well.”

She highlighted that the playground caters for “tiny tots to the more adventurous” and includes several pieces of equipment which cater for children with disabilities. She then outlined the benefits of the beautiful sensory garden, the design of which is in keeping with the tranquil river setting.

Raising money for such a huge project was never going to be an easy task, but the local community in Piltown certainly rallied in support of the ambitious venture. The committee’s first endeavour was a community envelope collection.

“Further smaller events were organised but could only get us so far,” explained Sinead.

The committee decided to enlist the assistance of an event management company to embark on the biggest fundraising event, ‘Piltown Does the Oskars’.

A team of volunteer cast members auditioned and met with an acting coach who selected people for specific roles, including a lead actor or actress for each movie. Participants underwent coaching sessions and held meetings amongst themselves in order to perfect their performances. All movies were filmed at various locations around the parish and participants raised funds individually and also as part of their respective groups. Among the fundraising events to have taken place were quizzes, walks, afternoon tea, and a novelty GAA match. Local businesses also provided huge support.

“Very bravely, this group of people stepped outside their comfort zone and went in front of the camera,” said Sinead.

The gala event was scheduled to take place at the Lyrath Hotel on Saturday March 14th, 2020 – two days after indoor gatherings of more than 100 people were cancelled due to the onset of the pandemic. This resulted in huge disappointment for everyone involved but the committee members hope to stage the event in the near future.

Gerri was described by the committee as having been “instrumental” in the commencement of the project and was praised for her “tireless work ethic”. She was presented with a bouquet of flowers as a token of appreciation. 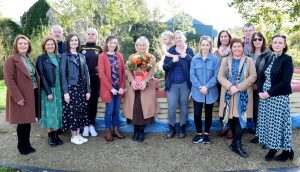 Sinead also praised the generosity of local businesses which enthusiastically backed the project.

“We’re so lucky here in Piltown to have such wonderful support from the business community,” she said.

Choosing the final design and contractor for the project was an arduous process which took place during lockdown, meaning crucial meetings took place online.

“Standing here now on the transformed site, we can all be very proud of what we have achieved,” said Sinead who paid tribute to her committee colleagues. “We could not have envisaged the hurdles we faced. But seeing everyone here, and the joy it has brought, has made it all so worthwhile.”

Joe Sullivan, a friend of late John O’Shea, spoke of growing up in the area and his memories of John O’Shea and Piltown of yesteryear. He outlined the remarkable progress which has taken place in the area in recent years.

It’s clearly evident that Piltown is a community which other communities in the region and throughout Ireland could certainly learn a thing or two from.

The community has undoubtedly set the bar for what can be achieved by other areas of similar size. With such dedicated and enthusiastic volunteers working for the betterment of their local community, Piltown’s future is certainly in safe hands.