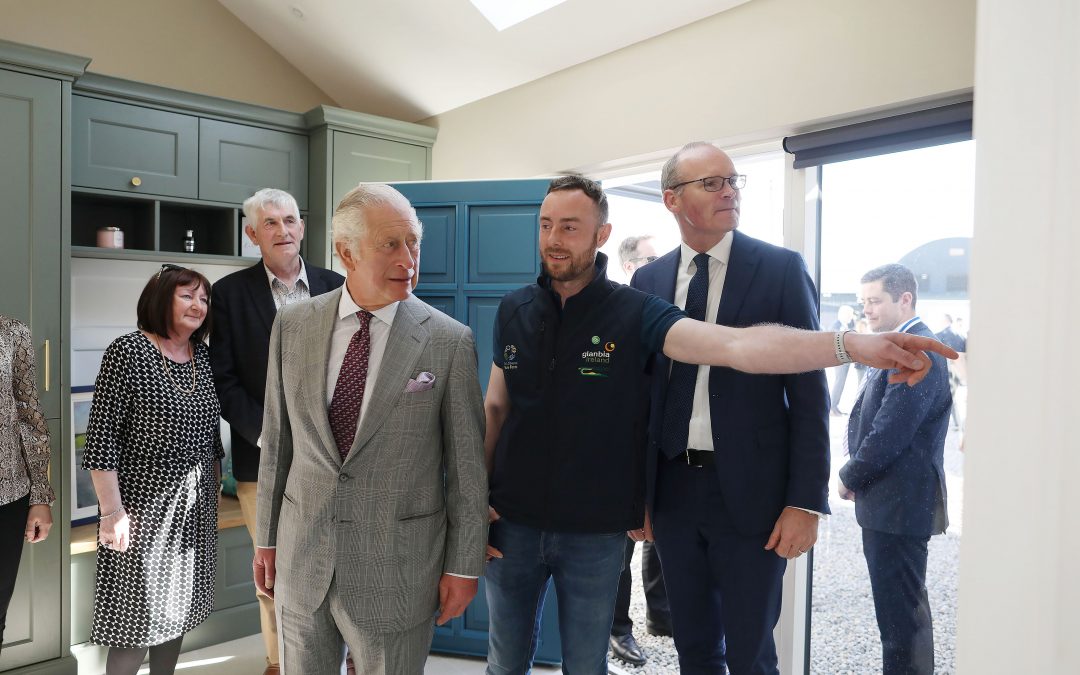 Thursday March 24th is a day which locals in the picturesque townland of Kilmagemogue will speak about for decades to come.

Underneath gorgeous sun and a clear blue sky, the surreal sight of a convoy featuring the Prince of Wales made its way to the 92-hectare farm of progressive local farmer Shane Fitzgerald (31).

The dairy farmer, who is milking 200 cows on the family farm located near Portlaw, said Prince Charles told him he was impressed with the environmental measures implemented on the farm, including the planting of hedges to provide cover for nesting birds and protecting waterways.

The Prince of Wales arriving at Shane Fitzgerald’s Farm, alongside Shane and Simon Coveney TD, Minister for Foreign Affairs and Minister for Defence.  Included are Shane’s parents John and Bernie.

“He recognised we are trying to do our best and it is going to take time for all farmers to become carbon neutral, but I think it’s important that people recognise that farmers are trying to do the right thing,” said Shane who is farming in partnership with his father John and partner Kate.

Prince Charles told Shane that he’d spent his life “trying to get people to plant hedges” after being shown the range of hedgerows that have been planted on the farm in recent years to improve biodiversity.

“I felt really at ease with him. He felt like a normal person, to be honest,” said Shane. “It was a once-in-a-lifetime type of experience and I feel proud like for the local area and for ourselves to have someone of his stature come here.”

During his visit to the Fitzgerald farm, the Prince of Wales was treated to a range of demonstrations including about soil by Teagasc sustainability adviser Cathal Somers.

Reflecting on the enormity of the visit, Shane admits “it’s all a blur”.

“The Department of Foreign Affairs had people down to us for a few times in the last few weeks and given all that’s been going on in the world the last few weeks, I really didn’t believe he was coming here until he arrived in the gate.”

He added: “This really was a once in a lifetime experience and I’m very proud for the farm, the family and the community. It was great to have someone of his stature on our farm today and we’re thrilled with how well everything went.”

Shane admits he did try to get the Prince of Wales to stay longer, but his officials whisked him away. He did, however, manage to give him a gift — a jar of Kilmagemogue honey.

“A friend of mine is a beekeeper, and he has hives here on the farm. It’s Kilmagemogue honey. He was delighted, and only for we ran out of time, he was going to come in for a cup of tea as well.”

Shane is part of the Teagasc Glanbia Signpost Future Farm programme and has embraced many of the technologies that will reduce greenhouse gas emissions on his farm including breeding high quality animals, maximising the number of days cows are out grazing, using protected urea, cutting back on the amount of chemicals he uses, using low emission slurry spreading equipment as well as improving soil fertility and using multispecies swards.

He has won a number of awards including Teagasc/FBD Student of the Year in 2016 as well as FBD/Macra na Feirme Young Dairy Farmer of the Year 2020. He is chair of the Agriculture Affairs Committee with Macra na Feirme and is passionate about change perceptions of farming amongst the wider public.

“We have 200 cows here and in some people’s eyes that counts as an industrial farm but there’s no such thing as an industrial farm in Ireland,” he says. “We’re all family farms, we’re custodians of the land and we want to hand on this land in great condition to the next generation. That’s at the heart of what we do here.”