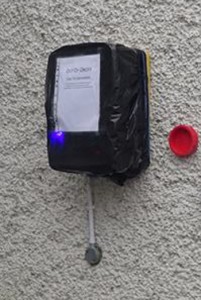 The public access defibrillator in Portlaw which is currently out of order.

A PUBLIC access defibrillator installation at Portlaw National School was vandalised at the weekend.
Although the defibrillator itself was not removed, the case surrounding this piece of life saving equipment was seriously damaged.
“Thankfully the AED (automated external defibrillator), which was housed outside the school for access by anyone in need of this life saving piece of equipment, proved too awkward to remove through the broken glass – or wasn’t wanted in the first place,” said Mareike Eccleston of Irish Red Cross (Portlaw). “It is now safe with one of our 24/7 Cardiac First Responders.”
The incident is believed to have occurred on Friday night but was only discovered on Sunday morning. The AED was installed outside Portlaw National School in May of last year.
Ms Eccleston expressed relief that nobody had required the use of the defibrillator at the weekend.
She said interference with public access defibrillators would be treated very seriously and likened such incidents to the removal of ring buoys.
“There is a public outcry whenever a ring buoy is damaged or removed. It should be the same whenever an AED is interfered with,” she said.
“Please keep an eye on these potentially life-saving facilities and report any suspicious behaviour to the Gardaí who are currently investigating this incident,” she added.
The Irish Red Cross Portlaw Branch received funds from the Michael Power Memorial Swim at the weekend at a special function in Dunphy’s Pub, Kill.
The annual charity swim, which took place at Kilmurrin Cove on Christmas Day, raised €20,950 for the Irish Red Cross Portlaw Branch.
Ms Eccleston said that it was “a slap in the face” to discover that the AED in Portlaw had been vandalised on the same weekend that the branch had received the much appreciated funds.
She said there was a huge amount of shock and anger over the incident in the locality.