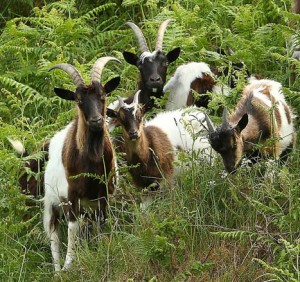 Marauding: the goats of Passage East.

A PUBLIC meeting will take place in Passage East this week to address the controversy surrounding the village’s herd of goats.
As reported in The Munster Express last month, a number of local residents have expressed concerns over the wild goat herd which lives on a hillside overlooking the village.
Locals have spoken of the damage caused to gardens and the dangers posed to traffic by the goats.
The issue attracted significant attention when one local family erected signage during the general election campaign stating ‘Politicians take heed, if you want our votes, control the goats’.
Lillian Lynch said her family has had to “spend a fortune” in order to protect their property because of the goats which she says are “running wild”, “marauding in our garden” and using the area as a “stomping ground”.
“They defecate all over the place and have ruined our garden,” she said. “We’ve had to replant and re-fence. The place is now like Fort Knox.”
Ms Lynch and her family have made repeated attempts to get the Department of Agriculture to address the issue.
The Munster Express understands that many other locals, especially in the Knockroe/Parkswood areas, have expressed concerns.
While a wild herd is said to have grazed in the Passage East for more than 200 years, the goats in question were introduced to the area five years from the famous Bilberry Herd but the number has multiplied significantly.
This week’s public meeting takes place in Passage East Community Centre on Wednesday March 30th starting at 7.30pm.
The meeting will be chaired by the local Development Association and all from the local community are welcome to attend.