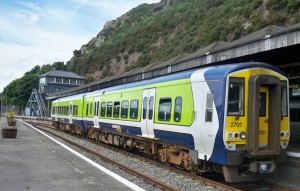 The commuter train, which has been regularly used on the Waterford-Limerick Junction line over the years. The closed route to Rosslare, and the route to and from Limerick were once alive with freight traffic, primarily engaged in the transport of sugar beet from Mallow.

The winding-up of sugar beet production 10 years ago, an industry which was worth €150 million a year to almost 4,000 Irish farmers, led to a debilitating reduction in the use of the Waterford to Rosslare rail line.
This is what prompted Irish Rail to close (“suspend”, as it was then phrased) passenger services on the route in the summer of 2010 given that beet freight had previously “sustained the viability of the line”.
The beet train, chugging through Carrick-on-Suir on the Waterford to Limerick Junction line, was a regular morning sight for secondary school goers in the town for decades, crossing the Pill Road beneath Scoil Mhuire and the CBS.
But the days of counting how many trailer loads of beet was being ferried from Mallow, on the ‘boat train’ to Rosslare, have long since passed, and fears that the Waterford-Limerick line may soon be left to rust are both real and long-standing.
“Sugar beet freight underwrote those lines,” said Irish Rail’s Barry Kenny, commenting about the National Transport Authority’s Rail Review 2016 Report, which was published last week. “It made the line from Limerick Junction to Waterford and from Waterford to Rosslare cost-effective and offset any maintenance costs on those lines for all the years beet freight was in operation.
“Obviously, that is no longer the case, and, in the case of the Limerick Junction to Waterford line, and taking freight from the west into the picture as well, there has been a considerable reduction in freight traffic since 2006. And while there is a lot of focus on passenger numbers in the Rail Review, freight also features and will continue to play a role within the rail network looking ahead.”
Offering a glimmer of hope for the Limerick-Waterford line (one could argue), the Report states: “Any rail lines that could support the development of rail freight in the future, where passengers services do not exist, should be protected in the interim while the business case for that investment is developed.”
The Review also states that on National Rail Census Day 2015, “a total of one boarding and no alighting” was recorded in Carrick-on-Suir, making it the quietest station in the Republic.
“All four stations between Limerick and Waterford…were all among the 15 least used on the network with less than 40 passenger movements.”
Speaking to The Irish Times recently, Carrick-on-Suir Business Association’s Seamus Campbell claimed that appeals from the local business community to promote the line and improve timetabling to and from Waterford (and Clonmel) had “fallen on deaf ears”.
“Every town needs a train station,” said Mr Campbell. “The timetable is just not conducive to allowing people travel by train to Waterford or Clonmel for work. It is just not possible. Because the service is so restricted people car pool to get to work. The train station is of no real use to people as it is.”
Barry Kenny said that services on the line, taking Carrick into account, were increased previously, only to be decreased again in 2013 due to a lack of demand.
He rejected the notion that the Carrick station’s location (it is not well signposted by any means) was a mitigating factor against usage, adding: “Shankill, which is on the Dart line, is a virtually hidden station down a side road, and it has a thousand people a day using it, so I don’t feel that’s one of the issues impacting on passenger numbers in Carrick-on-Suir.”