“Time to upgrade sections of N25 in Cork,” says Cllr Roche
The effective marooning of Waterford form East Cork and Cork city during Storm Frank offered a stark reminder of the reality of University Hospital Waterford’s (UHW) restricted, five-day cardiac care provision.
While also calling for an overhaul of the main roads connecting both Cork (N25) and Limerick (N24) to Waterford, Councillor Mary Roche (Ind) noted that the N25 is, for cardiac patients, effectively a lifeline between UHW and Cork University Hospital (CUH).
“The closure of the N25 was quite serious (during Storm Frank) because that’s the route patients have to take once our cardiac car unit at UHW is closed; it’s the route patients have to take to CUH, in many instances, in order to have their lives saved,” said Cllr Roche.
“And if there’s a delay in getting to CUH or if there’s a diversion between Waterford and Cork again, was the case during the recent floods, then we need to make a formal approach to Cork Council, whether in tandem with us or independently, but that the N25, particularly at the Cork end of it needs to be upgraded, but the whole road needs to be looked at, in my view.” 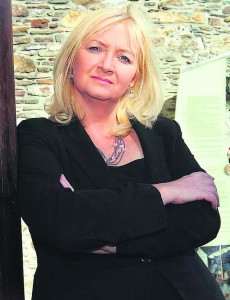 Cllr Mary Roche, who has called for urgent upgrading of both the N24 and N25.

Cllr Roche added: “This isn’t a particularly fresh thought on my behalf, but it’s one that came to mind when, at the height of the storm and in the days that followed, access between Cork and Waterford was, at best, extremely protracted. Flood or no flood for that matter, the N25, which is one of the busiest commuter and commercial routes needs to be upgraded, and that’s been the case for many years ”
Mary Roche continued: “Our national primary road network development has, historically, focused on getting cars from Cork, Galway and Limerick in and out of Dublin; it’s been very Dublin-centric, but there is life beyond the Pale and we in Waterford travel to Cork, Limerick and Galway quite a lot…
“So there has to be a focus on connecting Waterford to Cork and Waterford to Limerick and perhaps we could draw Kilkenny into that particular regional hub too.”
As was noted during the Council’s recent Emergency Meeting to discuss its response to Storm Frank, both the N25 main road and N72 (Lismore) road were closed for lengthy spells during the worst of the flooding, further complicating access to and from Cork.
As Council Roads Director Paul Daly told the meeting, for a period during the height of the storm on December 30th, “there was no access to West Waterford (and Cork, in turn) from the Dungarvan direction”.
Cllr Roche, also not for the first time, said that the recent flooding along the N24 highlighted the urgency of addressing the long-standing issues on the Waterford-Limerick route.
“We also need to liaise with our counterparts in Kilkenny, Tipperary and Limerick when it comes to the N24 because what happened in both Mooncoin and Carrick (during Storm Frank) was unacceptable given the huge levels of interconnectivity we have between our regions. When you can’t get to work or to hospitals because national primary roads are underwater, that simply isn’t good enough and this cannot be allowed to continue.”