The Fresh Breeze of Social Farming

Darragh Quinlan was happily talking to one of the many visitors who recently travelled to Ballinamona Farm, run by Bill Spencer and Renata Anukaite, about the benefits of the Social Farming Ireland (SFI) programme he had just completed.
I happened to be within earshot as Darragh spoke about how much he and his fellow participants, Fred Sullivan and Josh Keating, had enjoyed their 12 weekly trips to Bill and Renata’s farm.
“I love being here,” said Darragh, a regular at Walsh Park and one of the Waterford hurling team’s biggest fans, while Disabilities Minister Finian McGrath was being brought on a tour of the farm. “We are part of a team out here, doing lots of things, and I really like that. It’s a very happy place.” 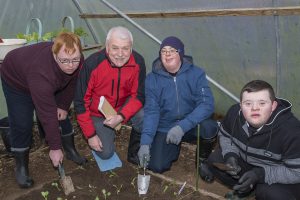 Minister of State with Responsibilities for Disability Issues, Finian McGrath, is pictured at Ballinamona Social Farm with Fred Sullivan, Darragh Quinlan and Josh Keating. Fred, Darragh and Josh were the first participants in the Social Farming Ireland (SFI) scheme at the farm run by Bill Spencer and Renata Anukaite.

Both Fred and Josh clearly enjoyed themselves too, and made for great company as the visiting party were provided with refreshments following the tour. “It’s been really nice,” said a widely smiling Josh. “I’ve liked being on the farm and I’m glad I got to come here.”
Fred struck a similar note, telling me: “It was great fun, and the people involved were really nice. We all liked being involved in this and I’d day other people would like it too.”
As SFI’s literature states, social farming offers “activity on family farms as a form of social service. In Social Farming the farm remains a working farm at its core but invites people to participate in the day to day activities of the farm”.
Social Farming “provides people who use services with the opportunity for inclusion, to increase self-esteem and to improve health and well-being. The farm is not a specialised treatment farm; rather it remains a typical working farm where people in need of support can benefit from participation in farm activities in a non-clinical environment.”
And given the sunny commentaries provided by Darragh, Josh and Fred, the first participants in the SFI programme at Ballinamona, it’s clear that the initiative is having the desired nationwide impact, following its piloting throughout Northern Ireland and Border Counties between 2011 and 2014.

Bill Spencer taking Minister McGrath on a tour of his Ballinamona Farm on January 11th.

“This is a new and radical departure for adults, particularly those with intellectual and physical disabilities to get them out into the community,” said Minister McGrath, following his tour of Ballinamona Social Farm.
“So the Social Farming project is an excellent initiative and one that I have been a strong supporter of over the years. And we need to ensure that it’s developed even further. We’ve seen the three lads here involved in rearing animals, getting involved in the feeding and the management of the farm, working on allotments and in polytunnels: isn’t that better than being in an institution all day or five days a week?”
The Minister continued: “There are lots of progressive and radical steps being taken to support people with disabilities. These fit in with my own National Disability Inclusion Strategy which includes a lot of new ideas and I’m thrilled to be here, in Waterford, and seeing it work so well on the ground.”
The Waterford project has been advanced by the Waterford Leader Partnership, working in partnership with a local benefactor and the Social Farming Support office (based at the Leitrim Development Company).
Brian Smith, SFI’s National Planning Manager, said the Department of Agriculture “is now funding the development of social farming nationally” and his office is now working with Waterford Leader Partnership, West Limerick Resources and the South West Mayo Development Company.
“What we’re doing is stimulating the concept within the farming community and also trying to find people who are interested in going out onto farms or into horticultural settings with growers who can benefit from what they have to offer,” he explained.
“Growers and farmers have a lot to offer within themselves, within the farm environment they work in given their assets – the animals, the plants, etc – and that’s hugely beneficial because being outside, just engaging with those elements can ground you at times in life when you’re disconnected.”